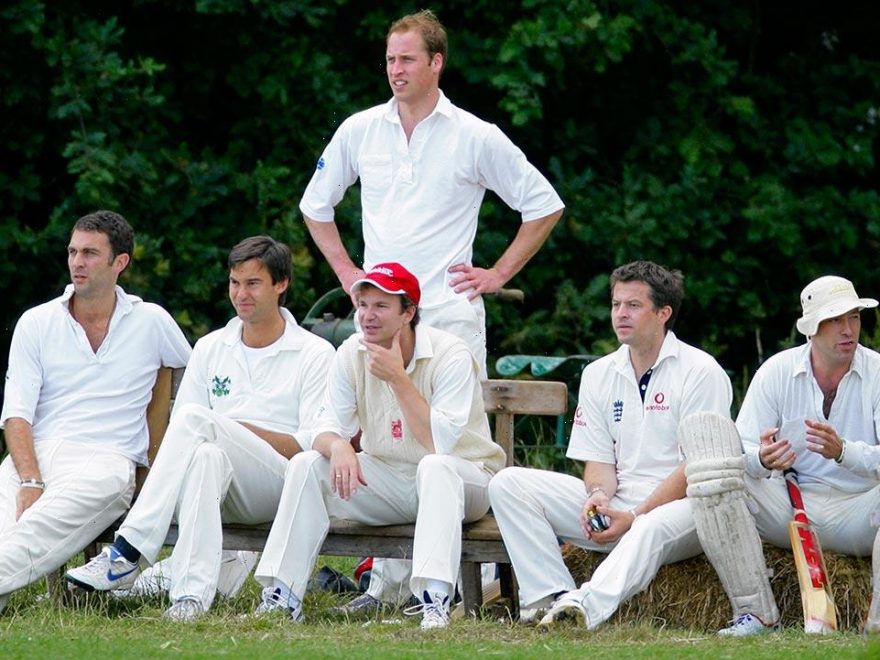 The Duke of Cambridge may be busy preparing for his role as King one day, but the royal has kept a few friends very close for support.

Over the years, Prince William has maintained his friendships with fellow students he met whilst studying at Eton College and St Andrew’s University – the place he also met his future wife, Kate Middleton.

His mates have been by his side in almost every important milestone; his engagement to Kate, their royal wedding in 2011 and of course, when the couple welcomed their three children. A handful of them have even been picked to be godparents, while William has also acted as their children’s godfather.

MORE: Who is inside Duchess Kate’s inner circle?

The van Cutsem family go way back with the British royals. His father is Hugh van Cutsem Sr. is Prince Charles‘ best friend from Cambridge. He had four sons: Nicholas, Edward, William, and Hugh Jr. Notably, Edward is Charles’ godson and served as one of two pageboys in his wedding to Princess Diana. William grew up on the Sandringham estate in Norfolk, and has been best friends with the second-in-line to the throne ever since. In 2013, he married Rosie Ruck Keene, and William served as an usher. He is also godfather to Prince George.

WATCH: Highlights from Prince William and Kate’s marriage as they celebrate ten-year anniversary

A former equerry to the Queen Mother, Mr Lowther-Pinkerton served as Prince William and Prince Harry’s private secretary from 2005 to 2013. He recently accompanied the royal brothers to the unveiling of the statue of their late mother, Princess Diana, at Kensington Palace gardens in July 2021. Mr Lowther-Pinkerton is also Prince George’s godfather, and his son, William, was one of the pageboys at the William and Kate’s wedding in 2011.

Hugh is the older brother of William. After their father passed away in 2013, the family remained close with the royals. His daughter Grace was a bridesmaid at Prince William and Kate‘s royal wedding in 2011; she immediately become an internet sensation when she appeared on the balcony with a scowl on her face, covering her ears while the newlyweds shared their first public kiss. Prince William is also her godfather.

MORE: Prince William and Kate’s young bridesmaids and page boys – where are they now?

James, who is the son of Richard Meade, the Olympic three-day eventer, attended Eton College with Prince William back in 2000. Along with his wife Lady Laura, the couple live near Anmer Hall, which is William and Kate’s country home in Norfolk. In 2011, James delivered the part of the best man’s speech with Thomas van Straubenzee at William and Kate’s royal wedding. He is also godfather to Princess Charlotte.

Thomas is one of William's closest and long-time pals, having attended Ludgrove prep school with William. He served as an usher along with James Meade at the royal wedding in 2011, and shared the toast at the wedding reception. Prince William returned the favour by being an usher at Thomas's 2013 nuptials. Thomas is also Princess Charlotte's godfather.

Oliver is a good friend of both William and Kate’s; he was a student with them at St. Andrew’s University in Scotland. He is also one of Prince George‘s godparents.

MORE: When royal babies get the giggles!

Guy helped organise William’s bachelor party. A well-known nightclub owner, Guy is famously tight-lipped about his princely pals. Both Princes attended his nuptials to Elizabeth Wilson in 2014. Their friendship dates back to 2001 when they met during a fox hunt, and they’ve been involved in each other’s milestones ever since. Despite his partying reputation, Guy is one of Prince Louis’ godfathers.

He is the son of Sir Henry Aubrey-Fletcher, the Lord Lieutenant of Buckinghamshire. Prince William was an usher at Harry's 2011 wedding to Sarah Stourton, the eldest daughter of Baron Edward Stourton. William's then-fiancée, Kate Middleton, also made an appearance. He made headlines a few years back for playfully giving Prince William's ear a pinch in public.

Make sure you never miss a ROYAL story! Sign up to our newsletter to get all of our celebrity, royal and lifestyle news delivered directly to your inbox.