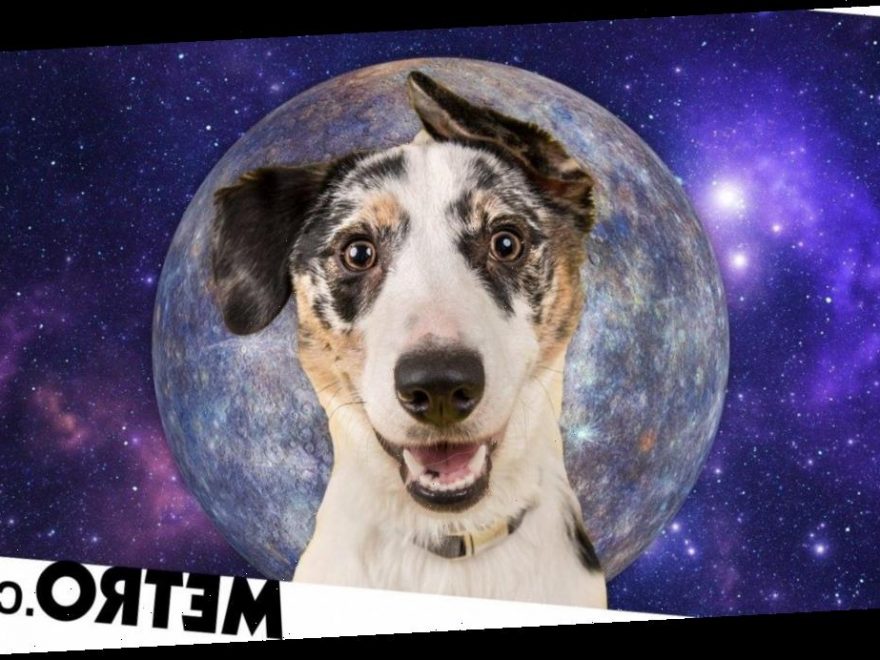 If your dog is acting strangely today, it may not be because they’re trying to signal for treats or walkies.

In fact, it could all be to do with astrology, with 32% of pet owners believing that Mercury Retrograde causes their pets to act strangely.

A survey from pet wellbeing specialist ITCHpet.com asked owners about some of the strange things their animals got up to, and it seems they’re having more than a mad half hour at times.

Acting like a human, trying to do a forward roll, sleeping in an empty bathtub and even sucking on a baby’s dummy were among some of the unusual behaviours cited, and although 48% of owners found these things funny, 20% had even taken their pet to the vet as a result.

Mercury Retrograde is a time in the astrological calendar where the planet appears to move backwards.

It’s attributed to disorganisation and frustration when it comes to communication, and astrologers advise people to avoid making big decisions or signing contracts during this time where possible.

If pet owners have noticed the Retrograde wreacking havoc in their own lives, it’s understandable that they’d see their pets acting oddly and assume the same.

Psychic astrologer Jessica Adams spoke about the phenomenon, saying: ‘Pets can do all sorts of unusual things and a lot of the time we, as humans, can find it thoroughly entertaining. It’s what makes our pets so loveable.

‘However, their quirky goings-on might be down to more than just a ‘funny five minutes’ – as it could be due to something called Mercury in retrograde.

‘Mercury is the planet that actually rules pets. When it appears to go backwards and forwards, moving in peculiar ways, so does life in general – according to your horoscope. This is what’s known as Mercury Retrograde. And animals also get affected.’

‘In 2020 we have Mercury Retrograde, and Mercury Petrograde, three times; February and March. June and July. October and November.

‘So, if you think your pet’s behaving strangely, the answer is in the stars – with astrology at play.’

The recent Retrograde began on February 18, and ends on March 9, so keen an eye on your furry friends and the stars during this time.

Interestingly, two-thirds of respondents also said their cats and dogs have a ‘sixth sense’ when it comes to mood changes in the atmosphere (66%), suggesting we definitely believe our pets have supernatural capabilities.

How Mercury Petrograde affects your cat or dog

Astrologer Jessica Adam has the lowdown on how to deal with your crazy critter during this tumultuous time in the stars – all depending on their star sign.

The Aries Cat
Hunters who’ll head-butt flies or chase dogs – or the postman. On Mercury Petrograde, though, the postman may well chase them.

The Aries Dog
They’ll bite everything, including your hair. They also like digging floorboards. Especially on Mercury Petrograde. Watch for holes.

The Taurus Cat
They are dribblers who love their breakfast and will lick empty food bowls. On Mercury Petrograde, they’ll even lick the fridge.

The Taurus Dog
They do like chicken. And turkey. And trying to catch sparrows. If their tastes change to caviar, you can blame Mercury Petrograde.

The Gemini Cat
They imitate you, the radio or the dog. They sing along to songs, but usually get the words wrong on Mercury Petrograde.

The Gemini Dog
Barking at the TV? Jumping on it? You must have a Gemini dog. Try not to let them answer the phone on Mercury Petrograde.

The Cancer Cat
They miss you so much when you go shopping, they get in the bag. Don’t let them sleep on your face on Mercury Petrograde.

The Cancer Dog
Home-loving Cancer dogs lick the radiators when it’s cold. On Mercury Petrograde, they’ve been known to carry around logs.

The Leo Cat
They like gazing at themselves in mirrors, windows or glass doors. Make sure they don’t walk into them on Mercury Petrograde.

The Leo Dog
Kings and Queens. They look good in Christmas cracker paper crowns. On Mercury Petrograde they may pinch your best hat.

The Virgo Cat
Fussy! They sniff food before they eat it. On Mercury Petrograde their tastes may change to the strangest things. Even mud.

The Virgo Dog
The Virgo dog loves routine and will stand on you five minutes before the alarm. On Mercury Petrograde, they’ll be an hour out.

The Libra Cat
Romantic Libra cats are enthusiastic bottom-sniffers. Best make sure it’s not your bottom on Mercury Petrograde, though.

The Libra Dog
They form duets with other pets. On Mercury Petrograde, you might find them answering to their best friend’s name instead.

The Scorpio Cat
The bankers of the cat world. They line up dead mice they’ve caught. On Mercury Petrograde, the mice tend to line up them.

The Scorpio Dog
Sexy! They hump footballs. They have relationships with armchairs. On Mercury Petrograde, their libido may go backwards.

The Sagittarius Cat
Spiritual animals – but they have been known to eat the candles or incense. On Mercury Petrograde, they may even perform miracles.

The Sagittarius Dog
Great explorers, they are energetic doggy David Attenborough’s.
On Mercury Petrograde, though, they tend to run backwards.

The Capricorn Cat
They like to be on top and will scale any Christmas tree they see. On Mercury Petrograde, they’ve been known to get on the roof.

The Capricorn Dog
Organised Capricorn dogs pack their toys away like professionals. On Mercury Petrograde, they may pack your children’s too. Oops.

The Aquarius Cat
They like a gang and will form one with other cats, the dog, or the goldfish. On Mercury Petrograde, they’ll even try your neighbours.

The Aquarius Dog
Friendly Aquarius dogs love social media and won’t get their paws off your phone. On Mercury Retrograde, they may start messaging.

The Pisces Cat
They love pond-watching or goldfish bowl gazing. Washing machines, too. Don’t let them climb in on Mercury Petrograde.

The Pisces Dog
Biting hose water or sea waves is their hobby. Also barking at ghosts. On Mercury Petrograde, they may drink out of your mug.

Yet, worryingly, one in 10 believe fleas are a cause of animal antics which are out of the norm (11%), and a third were unaware fleas and worms can affect their pet’s behaviour (32%).

Charlotte Harper, co-founder of ITCHpet, said: ‘We love our pets regardless of their weird and wonderful behaviour and celebrate everything about them – from the good, the bad and the ugly.

‘But whether unusual antics are in the stars or not, it’s incredibly important to regularly check your pet for fleas and worms, as behavioural differences can also be down to their health and something they aren’t able to tell you about.

‘Which is why we recommend treating your pet for fleas every month and being sure to worm them quarterly.’