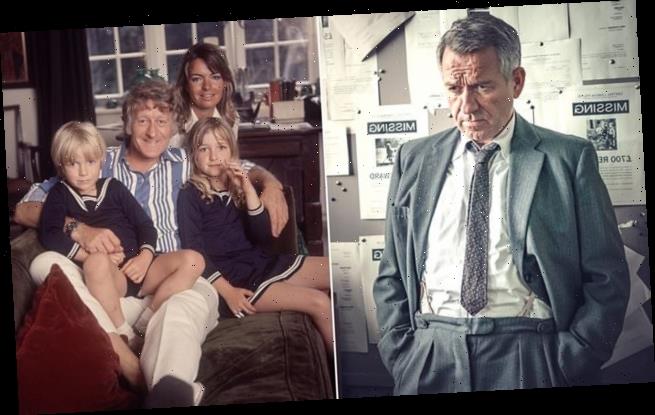 How a bohemian childhood with my Doctor Who dad turned me into a rebel: Actor Sean Pertwee on running wild in Ibiza as a child, his hippy schooldays and the eccentric father who still inspires him

On the fourth finger of Sean Pertwee’s right hand is a large silver ring from 850 BC that his late father, the most iconic Doctor Who of all, Jon Pertwee, found at the bottom of the Mediterranean and wore throughout his four-year reign as the eccentric Time Lord.

On his left forearm is a large tattoo, an image of the Perthuis family crest that marks his heritage back to the French Huguenots which his father spent his life searching for. Pertwee stretches out his arm to show off the blue crest. ‘About ten years after Dad died [in 1996], the crest surfaced through various people looking into it and, in memory of my dad, I had to have this done in honour of him.’ 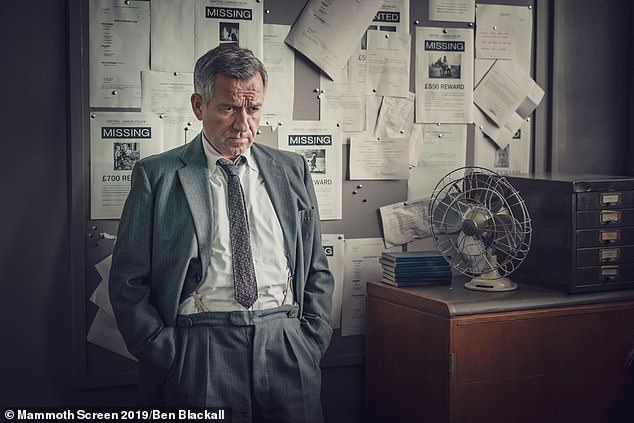 Sean Pertwee as Inspector Lejeune in The Pale Horse. Pertwee started out in the RSC and appeared in seminal Brit indie movies including Shopping before breaking into Hollywood with a string of films including Dog Soldiers, Doomsday and Mutant Chronicles

Like his father, Pertwee, 55, is an actor. An extremely good actor who has, in many ways, outshone the man who will always be remembered by generations of children for two legendary BBC series: Doctor Who and Worzel Gummidge.

Pertwee junior started out in the Royal Shakespeare Company and appeared in seminal Brit indie movies including Shopping before breaking into Hollywood with a string of films including Dog Soldiers, Doomsday and Mutant Chronicles.

Last year he returned to the UK after living for six years in New York, where he starred as Alfred, the butler in Gotham, the critically acclaimed Netflix Batman drama. He has produced a slew of movies and theatre plays alongside Jude Law, Jonny Lee Miller and Ewan McGregor with their former company, Natural Nylon, and part-owns an art gallery in London’s Soho. But despite all these achievements, to most of Middle England Pertwee’s voice is more recognisable than his face, as he has provided the dramatic narration for the BBC’s top-rated cooking show, MasterChef, for the past decade. He laughs: ‘Yes. I’d be a very rich man if I charged a quid every time I get asked to read a restaurant menu!’

This month Pertwee returns in front of the cameras in a beautifully shot BBC adaptation of the Agatha Christie mystery, The Pale Horse. Pertwee plays the hard-bitten Inspector Lejeune opposite his old friend Rufus Sewell as a historian, Mark Easterbrook, under threat from a trio of witches led by A Taste Of Honey actress Rita Tushingham.

‘It feels different from a lot of Christie’s books because it’s slightly lesser known,’ says Pertwee, ‘but it’s completely compelling and of course Rufus is ridiculously good in it and looks insanely handsome. The guy could slice open envelopes on those cheek bones.’

Pertwee himself looks like a man who is living a pretty good life. A former stalwart of the flamboyant group of artists, actors and musicians known in the Nineties as the Primrose Hill set, he is in good shape and deeply tanned from a recent trip to Thailand with his wife of 20 years, Jacqui Hamilton-Smith and his best friend, the musician Goldie. His face is, unmistakably, the face of his father. ‘The Pertwee gene is a strong one,’ he nods. ‘My son also has the same face but luckily he has his mother’s eyes.’

It is impossible to talk to Pertwee without talking about his father. As a teenager this may have infuriated him. He grew up with his older sister, Dariel, on Ibiza, where they lived a totally off-grid life with no electricity and endless outdoor activities including diving and riding motorbikes. The ring on his finger comes from a diving expedition to a shipwreck off the island’s coast. His dad believed the 850 BC Greek coin had been soldered onto a 55AD band by a Roman sailor and wore it from that day on. ‘He had so many stories and every time he would tell a story, one tiny fact would change, so you would always be fascinated,’ Pertwee recalls.

As a youngster his signal to come home would be his father ringing a cowbell because his mother, Ingeborg, a food writer, had prepared a family meal. ‘I went to the local hippy school and had the best life just being outside all the time,’ he says. ‘I then came back to London when my dad was doing Doctor Who. School was a bit of an issue because apart from knowing a lot about trees and songs, I didn’t know a hell of a lot else, so that was a bit of a problem.’ 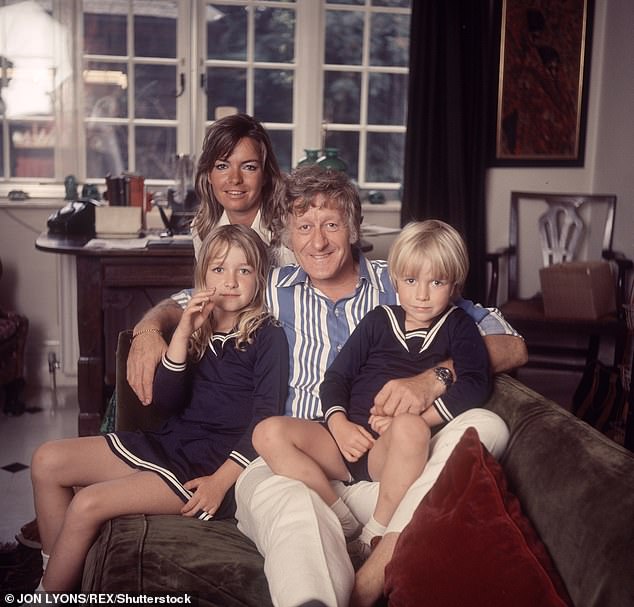 A young Sean Pertwee, with, from left, sister Dariel, mother Ingeborg and father Jon in 1969

Simultaneously, in 1970, as he appeared in the Tardis for the first time, his dad suddenly became the hero of ten million school children. And stars of the day – including Billy Connolly – would call up asking to be in the show.

‘I didn’t really understand all that,’ he says. ‘Kids just accept what is going on and don’t think too much about it. But I’d get a bit irritated when kids would come up to him and my dad would give everyone a lot of his time. I wasn’t used to that.

‘I’d come from living on a tiny island, running completely free, to this very different life and it did make me a bit of a rebel,’ he says. ‘I moved out of home when I was 16 and into a friend’s house round the corner. I was massively into bands. I spent all my time going to see them.’

Without telling his father, Pertwee applied to the Bristol Old Vic to study drama, winning a special grant to supplement his fees.

‘My dad was concerned about me because he thought I had no direction and I needed that. And I didn’t tell him about getting into drama school. Then he came to me one day with an overland ticket to Nairobi [in Kenya]. He wanted me to see real life. I didn’t see the point of it but he told me it would change me.

‘It was in the days when no one did anything like that. I went off with a group of people and it was crazy but incredible. We went through the desert, we went through the Congo, through the Serengeti. We had guns pointed at us, all sorts of mad adventures. But he was right, when I got back to London I was completely changed. I’d seen life, I’d seen death and I knew how lucky I was.’

He pauses. ‘When I came back, I went straight to Bristol. My dad wasn’t so much shocked as amused. It was then I discovered he’d done exactly the same thing to his dad, Roland, who was an actor and screenwriter for Charlie Chaplin. My dad’s rebel period involved riding a motorcycle around the wall of death in a circus with a toothless lion in a sidecar and then going off to act. I guess it runs in the family.’

Family and fatherhood loom large in Pertwee’s life. His one regret is that his father never got to meet his own son Freddie, 18, or his wife Jacqui [daughter of Lord Colwyn] whom he married in 1999, three years after his father’s death.

Becoming a father for him was not easy. His wife gave birth prematurely to twins and one boy, Gilbert, died within a matter of days, leaving his sibling Freddie in a coma for three months. The fact that he pulled through and is now a ‘funny, smart young kid’ changed everything says Pertwee.

‘I am in awe of the fact he had the strength to pull through and I made a vow to tell him every day that I’m proud of him. I do tell him that every day. My dad would tell me he loved me and that he was proud of me.’

He repeats many of the patterns of his childhood, from going back to Ibiza to visit the house he grew up in, to cooking for his son. And what of the Primrose Hill crowd? He shrugs: ‘We all still talk but everyone has busy lives so you don’t see each other all the time. But Jude, Jonny, Ewan and I will always be blood brothers because we grew up together, that’s just how it is.’

There have been rumours that he is to appear in the current series of Doctor Who alongside Jodie Whittaker. He shakes his head: ‘I was offered a part but I turned it down because it wasn’t right. There has to be a point to me being in it, it can’t just be that I’m there because of my dad.’

What would his father make of a female Doctor? He laughs: ‘He’d think it was bloody marvellous. He was a renegade, he was very much a bohemian who followed his own path and he had absolutely no prejudices at all.’

Right now there is another Jon Pertwee revival, with Mackenzie Crook revisiting Worzel Gummidge in a new series that divided critics, with some feeling his interpretation was ‘too scary’. Pertwee shakes his head. ‘There was a great environmental message he was putting across. Again, my dad would have approved.’

It’s clear that even today he misses his father deeply: ‘On the set of Gotham they wanted me to have a signet ring and someone had taken a photo of me in my dressing room in my underpants but you could clearly see my tattoo. They’d had the crest put into a signet ring, which I knew nothing about until the first day of filming. I was exactly the same age that my dad was when he did Doctor Who and there I was with this ring on with this crest he’d spent his life trying to track down. ‘That really brought tears to my eyes.’

‘The Pale Horse’ is on BBC1 next Sunday at 9pm