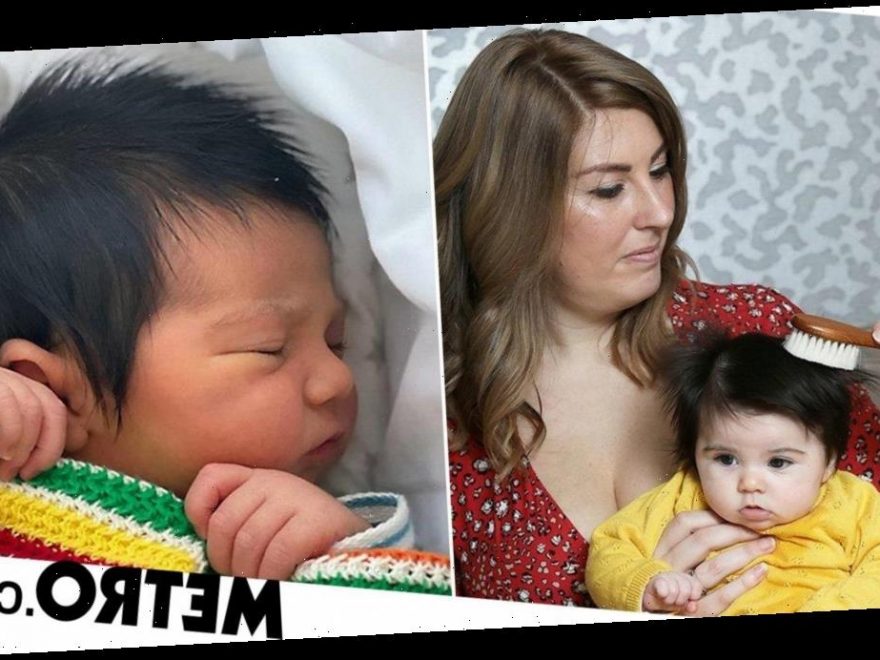 If you were born with a thick head of hair, your parents will probably remind you of it any time they’re nostalgic for your baby days.

For one little baby born with jet black hair, her parents gave her a nickname to go with her looks – Kim Jong-un.

We reckon that’ll stick around long into adulthood.

Little Nell Purser-Barriff has such striking locks that stops strangers in their tracks.

It even takes mum Samantha, 40, from Shropshire, twice as long to do her shopping.

Mum-of-three Samantha, from Bridgnorth, said: ‘It was just such a shock.

‘Especially as her brother is so fair – he’s blonde with fair skin. They really are opposites.

‘I know it sounds gross but when I was having an internal scan I was told it felt like she had hair.

‘But when she was born I didn’t expect it to be so much.

‘People were telling us that it would eventually fall out. But it just keeps growing!’

The family, who has Mediternnaen roots, put Nell’s look down to that.

Samantha said: ‘She absolutely loves playing with it. She always has her hands through her hair.

‘We get stopped all the time by strangers telling us what beautiful hair she has.

‘One time we were outside Marks & Spencer and a woman came up to me and said “I’ve got grandchildren but I just wanted to say she’s the most beautiful baby I’ve seen. She’s got lovely hair”.

Dad and IT consultant Terry added: ‘It was a shock. Samantha and I weren’t hairy babies so it’s not like it was a family trait.

‘People are amazed by it.

‘We had one old woman fussing over Nell for a good ten minutes before she turned to look at our soon and brushed him off like “oh yeah, he’s cute too”.

‘It’s definitely the Mediterranean blood in her.’