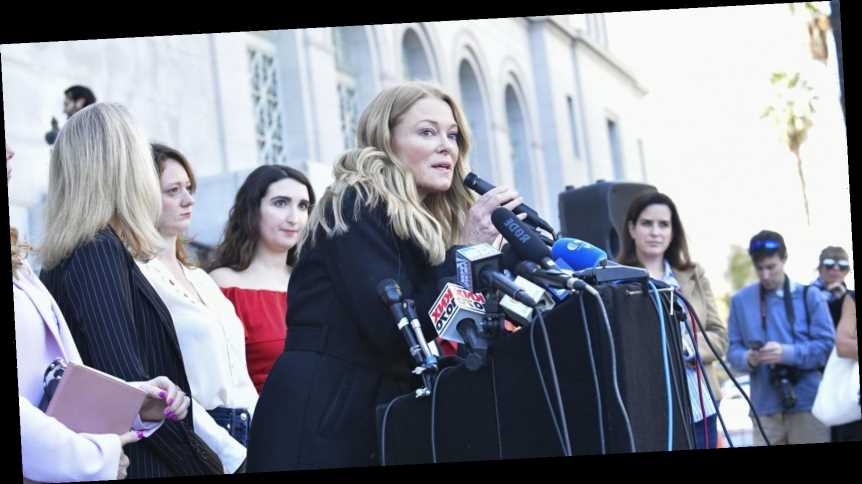 The women who brought down Harvey Weinstein have a message for us, and we need to sit up and pay attention.

It was an undeniably powerful moment. Standing shoulder-to-shoulder on the steps of Los Angeles City Hall, 11 women came together to issue their response to Harvey Weinstein’s guilty verdict.

Their names? Sarah Ann Masse, Rosanna Arquette, Melissa Sagemiller Nesic, Louisette Geiss, Louise Godbold, Lauren Sivan, Lauren O’Connor, Larissa Gomes, Katherine Kendall, Jessica Barth and Caitlin Dulany. Throughout this high-profile investigation and trial, though, we have known them collectively (among others) as the “Silence Breakers”. Because all of them have publicly accused Weinstein of sexual misconduct.

Once upon a time, Weinstein was untouchable, and his predatory behaviour was something of an open secret in Hollywood. Indeed, it was even the source of many high-profile jokes, as a compilation of clips – all of which were originally released sometime in the past two decades – recently exposed. The footage included Seth MacFarlane’s comments at the 2013 Oscars, which saw him read out the names of the women who would be in competition for Best Supporting Actress and applauding them for making it that far.

“Congratulations, you five ladies no longer have to pretend to be attracted to Harvey Weinstein,” he quipped, to titters from the audience.

Watch the video below:

It seemed as if Weinstein would never face the consequences for his actions. So much so, in fact, that men and women all over the world didn’t dare hope that he would be found guilty in his trial. And that, when the guilty verdict was announced, the primary reaction on social media was one of shocked relief.

“I really didn’t think this would happen. I was braced for him to be acquitted on all charges, and dreading it,” tweeted Stylist’s Moya Crockett, summing up the mood of many.

“This is such a ray of light, and I hope all the survivors, reporters, sources, lawyers and jury members who made it happen sleep well in their beds tonight.”

So what changed? How did Weinstein go from untouchable to guilty of rape in the third-degree? Well, the #MeToo movement caught fire. Which means that, in many ways, Weinstein’s investigation and trial took place in a completely different world – one in which we are all too aware of the fact that men take advantage of women every day, in every walk of life, and are rarely brought to justice. It began with the Silence Breakers, whose comments inspired an onslaught of accusations from women across Hollywood. And this cascade of survivors’ testimonies saw Weinstein’s veneer of impunity slowly began to chip away – with even his most influential friends turning their backs on him.

Quentin Tarantino, the Hollywood director most closely tied to the disgraced producer, publicly revealed that he knew enough about Weinstein’s behaviour to have done more. Peter Jackson admitted that he’d blacklisted Ashley Judd and Mira Sorvino upon Weinstein’s advice. Gwyneth Paltrow, once one of Weinstein’s most frequent collaborators, “became an early, crucial source, sharing her account of sexual harassment and trying to recruit other actresses to speak” with Jodi Kantor and Megan Twohey, the New York Times reporters whose story on 5 October 2017 triggered Weinstein’s downfall.

Even Bob Weinstein spoke out against his “indefensible and crazy” brother, insisting that he was “sickened” by his sibling’s apparent lack of remorse.

“I want him to get the justice he deserves,” the Miramax producer added.

Of course, Weinstein faced just five of the many, many accusations made against him at his trial. He was found guilty of two. But those two accusations represented so many more. He represented so much more. Because, when Weinstein came before judge and jury, he was no longer Hollywood’s famous predator: he was every powerful man who has misused a position of power to abuse and silence women.

Is it any wonder, then, that Arquette has declared this a “truly a landmark moment for survivors of rape and sexual assault,” as well as “a historic leap for the #MeToo movement.”

Speaking alongside Arquette at the press conference, Gomes added: “I’m not shaming myself anymore because the shame belongs with him. I’m not silent anymore because I’m doing what I can to ensure that he can’t silence one more woman.”

O’Connor, who worked as a literary scout for the Weinstein Company, said: “The balance of power was me 0 and Weinstein 10, [but] yesterday the scales of justice rebalanced. The power is now survivors 10 and abusers and predators 0.

“This verdict will change the history of future generations for years to come.”

Sivan continued: “His defence lawyer called the #MeToo movement out of control… that ‘We can’t just believe all women, we have to try them in a court of law’. Well, we did. And the jury believed the women. Maybe you can’t believe one women, but you can believe over 100 of them with very similar stories.”

Geiss, an actor and producer, addressed Weinstein directly, saying: “You messed with the wrong women… and to the rest of the sexual predators, we are coming for you.”

And Dulany stated that Weinstein’s legacy will no longer be the movies he made.

“[He will be remembered] as a convicted serial rapist,” she said.

Of course, the fight is far from over. While Weinstein has come to symbolise all powerful predators, the truth is this: he is just one man. There are countless others in positions of power who misuse their authority. And this insidious abuse reaches far beyond Hollywood and into industries where many men and women, particularly those from minorities and on low incomes, are afraid to speak out.

“I know that speaking out about rape and sexual assault is difficult if not impossible for poor women, women of color, disabled women and trans women, like my sister Alexis,” said Arquette.

“[But] I want to say to those women: Change is coming. We are your sisters. Justice has prevailed today in this case and I hope we’ll see more of it.”

The sentiment was echoed on Twitter by Rose McGowan, one of the first women to come forward with allegations against Weinstein.

“Today is not a referendum on #MeToo,” she said, underlining the fact that there is still so much more work to be done.

“This is taking out the trash.”

For now, though, let us celebrate this as a victory for sexual assault survivors everywhere: it shows us that people are more willing to listen to victim testimonies. That they won’t just blindly hero-worship famous men. And that attitudes around sexual assault cases are finally – albeit slowly – changing.

If you have been subject to sexual assault, call 999 to report it to police.

Information and support can be found at nhs.uk, gov.uk and rapecrisis.org.uk.

If you need to report assault or harassment on public transport, British Transport Police urges victims of sexual assault to report the crime as soon as possible, by approaching a police officer or station staff, calling 0800 40 50 40 or texting 61016.