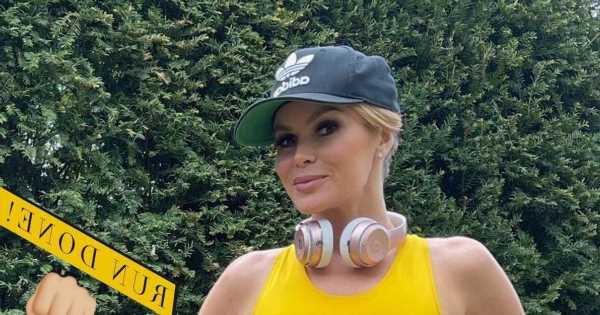 Amanda Holden has showed off her incredible lean body as she posed in a flattering sports bra and lycra leggings combo for a run on her Instagram page.

The TV star slipped into a skin-tight yellow bra for a work-out session with her assets peeping through the thin and revealing fabric.

The Britain’s Got Talent judge keenly displayed her lean and toned torso too, as she finished her look with a pair of patterned blue and white leggings and a navy cap.

Her blonde tresses piled up into a bun, Amanda also wore a set of fancy gold headphones and even seemed to be wearing a full face of make-up.

Amanda stood with her hands on her hips on a flower-strewn path in front of an enormous row of bushes.

The TV personality was clearly proud of her achievements, as she grinned and showed off her flashy work-out outfit.

“Run done!” the svelte 50-year-old captioned over her story.

“Bringing you the sunshine #sweatybetty,” the star added.

In complete contrast, the Britain’s Got Talent star shared an utterly stunning and truly glamorous shot of herself donning a beautiful gown on her main page.

The gold frock featured a low drop at the bust and was adorned with hundreds of tiny glittering jewels on the straps.

A gigantic feathered skirt then splayed out behind the actress as she lay on the floor for the image.

With her arm raised up, Amanda’s golden locks were styled into loose waves and she also featured a peachy lip and smokey eye to finish it off. Alesha Dixon praised: “There she is!”

Meanwhile, Amanda is set to return alongside Alison Hammond for the second series of I Can See Your Voice on BBC after a successful first series raked in over four million viewers.