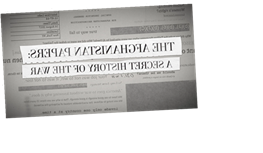 The Washington Post’s report on The Afghanistan Papers, which tells the secret history of the war in the country, is set to be turned into a documentary series and a scripted drama after Amblin Television acquired the rights.

The television division of Steven Spielberg’s production company has closed a deal with the Amazon-owned newspaper for the rights to At War with the Truth, the paper’s investigation into the six-part report.

It has tied with Oscar-winning documentary filmmaker Alex Gibney, who runs Jigsaw Productions, to develop the project as both a limited documentary series and limited scripted series.

The report was the result of a three-year investigation and a battle between the news organization and the U.S. government to have the documents released under the Freedom of Information Act. It tells the secret history of the war in Afghanistan, exposing behind-the-scenes frustrations, concerns, and blunt acknowledgements of failures from military and government insiders, both Democrat and Republican, who were publicly proclaiming confidence and progress.

As part of the deal, Amblin and Jigsaw will work closely with The Washington Post and have access to files, recordings, research and materials obtained as part of their investigation and will work with investigative journalist Craig Whitlock, who uncovered the story.

Amblin, Jigsaw and Gibney recently worked together on the documentary series Why We Hate, which aired on Discovery last year, and music documentary Laurel Canyon, which will air on Epix from May. No broadcaster or streaming platform is currently attached.

Amblin’s Frank and Falvey said, “The opportunity to definitively tell this extraordinary and important story is an exciting one. Thanks to the efforts of Craig Whitlock and all the journalists at The Washington Post, the public finally learned the truth about what has been going on behind closed doors in Washington as it relates to the war in Afghanistan – which has spanned almost two decades, three administrations and cost trillions of taxpayer dollars. Alex, Stacy and the team at Jigsaw are the very best at what they do, and we can imagine no better partner to work with in bringing this story to television audiences.”

Gibney said, “This is a vital story at a critical moment. For once we will hear an honest, intimate account from insiders of the epic tale of the forever war: politicians regale us with victory speeches while day by day, casualties mount and the battle for hearts and minds are lost. Why? Because no one bothered to wonder why we are there.”

Marty Baron, executive editor of The Washington Post, added, “When Post reporter Craig Whitlock became aware that senior U.S. officials had given confidential interviews about the war in Afghanistan, we knew it was imperative to examine them. When the government sought to maintain secrecy, The Post felt it had to challenge a policy of concealment. The public had a right to a full accounting of why this war has been the nation’s longest, with such a heavy cost in lives, injuries and money. Central to journalism’s role in a democracy is holding government accountable and giving citizens the information they need and deserve to know. In documenting how the public was misled about the war, we believe this work was faithful to that mission.”