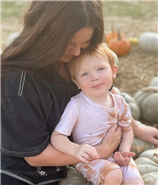 Amy Duggar must do what’s best for her immediate family.

For this reason, the mother of one said this week, she must stay as far away as possible from her extended family.

Anyone familiar with her extended family must understand why.

Yes, she’s a member of THAT Duggar family.

In honor of Mental Health Awareness Day, Amy has shared the following photo of herself and her two-year old son, while also penning a lengthy message that addresses anyone suffering in from any sort of emotional issue or obstacles.

No, she doesn’t specifically mention any of her relatives.

No, she doesn’t once again trash Josh Duggar as an evil monster.

Based on where she comes from, however? Based on the actions of those who share her last name, most notably the cousin referenced above?

It’s pretty clear to whom Amy is referring here.

“I want to be as healthy as I possibly can for my lil man!” wrote Duggar, adding:

“I must protect him and create boundaries that will help him grow in a peaceful environment!”

Protect him from whom? We don’t need da magnifying class to read between Amy’s lines here. She’s talking about YOU, Jim Bob Duggar.

Amy also urged fans to make sure to ask others “if they are OK [because] so many struggle on the inside and they’d never bring it up to anyone.

“If you don’t ask…You miss the opportunity to help someone, to save a life, to get a conversation going.

“Rally around the hurting. Nobody should suffer in silence. #MentalHealthAwareness.”

Amy hasn’t shied away of late from addressing Josh’s arrest on charges of “knowingly possessing material that contained images of child pornography,” including “of minors under the age of 12.”

The expecting father of six faces up to 40 years in prison.

He trial begins on November 30.

Amy previously referred to many of her relatives as toxic, and she also not so subtly begged and pleaded for Anna Duggar to get out of this abusive relationship.

Continuing her mental health advice in this case, she told fans:

“Do you have a lot of regrets? Your mental health will ultimately effect every relationship you have.

“If you are struggling, just know you are not alone. Talk to your doctor, have a conversation with a friend, someone you trust, someone you respect”

Duggar told The Sun this spring she was crushed by Josh’s arrest, adding:

“At the moment I have no comment to make. I’m kind of speechless, we just hope it’s not true.

“If it is true it would absolutely devastate a lot of people.”