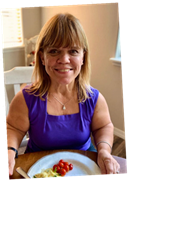 In a relatively new Instagram post, Amy Roloff mentioned a new season of her family’s beloved reality show for the first time, while also addressing a bit of apprehension over her new living arrangements.

Amy, of course, previously expressed a similar lack of excitement over her fresh digs.

She moved into them several weeks ago, after selling most of her farm property to ex-husband Matt Roloff.

The veteran reality star seems excited about the fresh start, but is also finding it hard to adjust after three decades on the farm.

“Sunday brunch in the new house,” wrote the mother of four as a caption to the photo above, adding:

“Woohoo! It’s been an adventure so far, definitely another BIG change in my life, after 30 years living on 33+ acres, and really not sure how to feel about it all. It might all hit me later but what I do know, this change was necessary.”

“It’ll take time getting use to- living in a neighborhood, being in a new house and making it a home. I’m ready though and I like my new house.”

Amy also got engaged last fall to Chris Marek, but she recently said she has to postpone their wedding to next year due to financial constraints.

And this happened right before her mom passed away. In other words: The TLC personality has been through a ton of late.

She elabored on her situation here as follows:

“In the meantime I’m fortunate, after 30 years living on the farm, that I get toI put on myself time, til end of January, to purge and completely move out my things and Keep what I really want and / or need from the farmhouse and take to the new house.

“Whew! Purging is the tough part and a good thing at the same time.

“Chris has been wonderful helping me do projects at the new house too. Couldn’t have done it without him. Thankful.”

TLC has not yet announced a premiere date, but we do have confirmation they’re on the way.

“Oh yeah more of All the details on my move will be a new season of @tlc #littlepeoplebigworld when new season episodes air maybe sometime in the spring,” wrote Amy, wrapping up with this:

What changes are you needing or feeling you need to make in 2020? What Things you hope don’t change?

Amy, as you likely know, isn’t the only member of her family to have undergone significant changes.

Both Audrey Roloff AND Tori Roloff gave birth over the last two months.

How exciting and amazing for all involved, right?!?!?