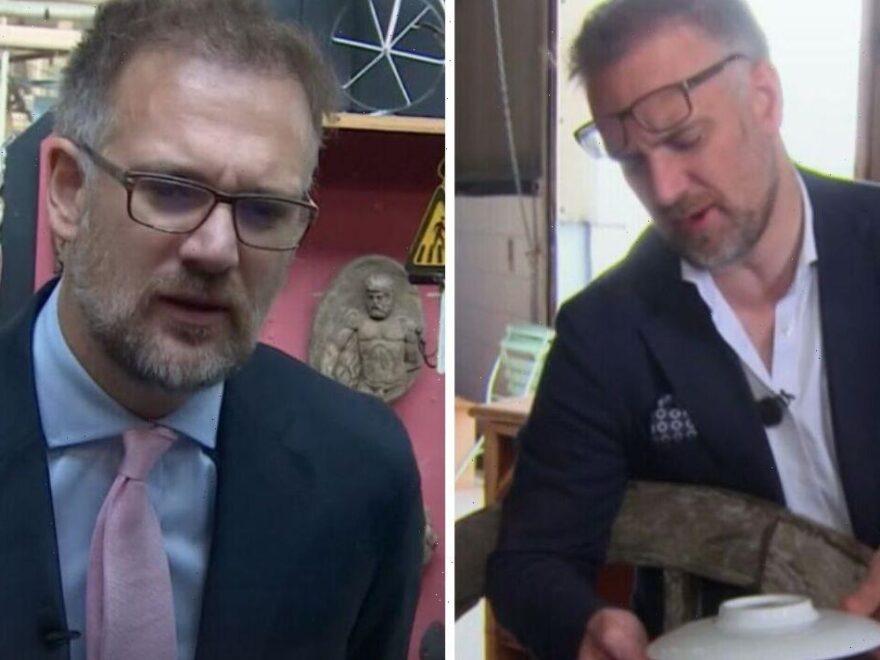 Charles Hanson will be a familiar face to viewers as he regularly features on Bargain Hunt and Antiques Road Trip. When the 44-year-old isn’t busy filming, he also runs his own auction room called Hanson’s Auctioneers. However, the expert’s love of antiques began when he was a child when his parents gifted him a metal detector.

Recalling that moment, Charles exclusively told Express.co.uk: “When I was nine my parents bought me a metal detector.

“And on their farm, rather than going out with my friends, I was quite a shy boy and I used to go detecting on my parent’s field looking for treasure.

“When I was about 10, I found a silver shilling from the reign of Charles I.

“And when it came out of the ground I thought, ‘Wow, from 1630 to now, talk to me. What could you have bought? Who dropped you? How’s the landscape changed? Who owned you?’

“That was really my passion, and that really sort of inspired me.”

Charles’ passion grew further when he studied history and art at university.

He later went on to work in several auction rooms before finally branching out on his own.

Discussing how he struggled during his early days, the expert continued: “In my early days, in and about 2005, I bought a modern piece of Clarice Cliff and it cost me over £100, and it made me about £10.

“That was dreadful because you do feel… obviously eyes watch you at home and the viewers watch you, and you want to make sure you do a job with professional judgement.

“But then sometimes in a different sale room, you’re in the lap of the gods and if the right buyers aren’t there, it takes just two buyers to bid if one isn’t bidding, the whole thing can fall a bit flat.

“You’re passionate about what you buy and you believe in the history.”

“And then when it makes an enormous loss, it’s a bit sad,” he added.

“But I think I’ve always said beauty is in the eye of the beholder. You buy what you like and hope what you like many others will like as well.”

Over the years, the expert admitted one of the things he loves most about filming is “all the drama”.

“You still always have the nerves, [when you enter] an auction room,” he explained. “It is a very unique experience.

“It’s that moment as an auctioneer, you have the moment when they say, ‘Going going gone’ and you try and make history.

“And you know when you make history, you really want to pack a punch and bring the gavel down with a real excitement.”

Bargain Hunt is available to watch on BBC iPlayer.