Inspiration can come from the most unanticipated places, like walking the dog in the park or buying a soft pretzel at the mall. For Morgan Cooper, it came in 2019 while driving down Route 71 in Kansas City, Missouri. Heading home after shooting a low-budget beauty commercial, Cooper concocted a plan to turn ’90s sitcom The Fresh Prince of Bel-Air into a gritty short film, with Will Smith’s iconic character reimagined as an unlucky Philly teen who gets caught with a gun during a playground brawl. Rather than face a certain future behind bars, his Uncle Phil works some attorney magic and arranges for Will to start over in the wealthy Southern California neighborhood where he would attend an elite private school.

Filmed in eight days with hometown actors and locations in Kansas City and Burbank, the three-and-a-half-minute potboiler was never meant to serve as a grassroots resume for a gig in Hollywood; Morgan just wanted to have some fun. “I built my career on staying focused on what I could control, and not getting too fixated on the result,” recalls Cooper, now 30. “But I knew the idea was special. I knew it had immense potential to be big.”

Within a day of uploading the film to YouTube, Cooper heard from Will and Jada Pinkett Smith’s Westbrook production company, which used it as the basis for Peacock’s Bel-Air—now the most streamed original series on the streamer. “Honestly, I’m not a fan of reboots,” says Cooper, who was named an executive producer and director on the series that earned an immediate two-season pickup. “But when there is an honest reimagined take, like The Dark Knight, now that’s somebody taking something and really making it his own. There aren’t a ton of things like that that come from a really sincere place, that aren’t studio manufactured, that aren’t birthed in a corporate boardroom. Mine came from the 71 highway.”

Cooper likes to say the Fresh Prince found him. While honing his skills as a self-taught cinematographer—he bought his first camera at 18 and spent his days in Missouri shooting music videos and learning how to light his subjects—he liked to spend his down time watching the ’90s sitcom that was “always in reruns” on his local Channel 38. “It was a staple in the community, to be honest,” says Cooper, who never attended film school before starting his own successful commercial-making business. “Seeing Black wealth on screen and seeing California, everything about it was so captivating. I didn’t grow up around wealth in Kansas, so to see all these different perspectives coming from Black people… the sitcom was so ahead of its time.”

So, it was more than a little surreal for Cooper to fly to Miami and meet Smith in the flesh. “It was like meeting a friend I had already known,” Cooper says. “He was so incredibly warm, he was so since Day 1. He was filming Bad Boys for Life and I saw him across the beach. I saw his silhouette saying, ‘Yo, yo, yo.’ He put his arms out wide. He felt like a big brother, embracing me.” 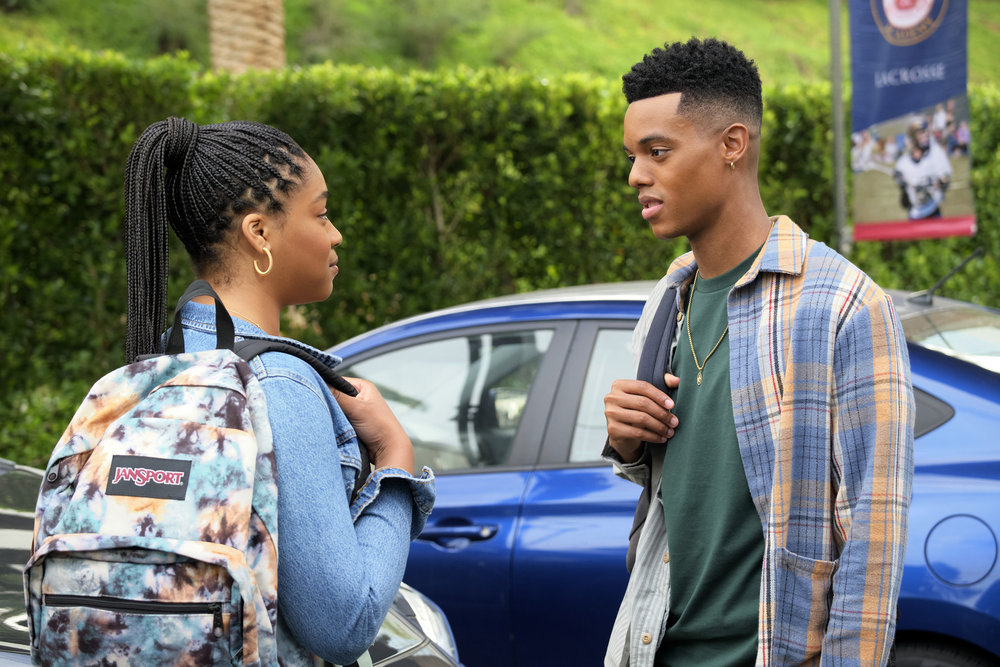 The men immediately set out to cast their reimagined drama. Like in Fresh Prince, Bel-Air’s lead character is an effervescent teen named Will Smith who is a natural at basketball and wooing the young ladies. In other words, it seemed almost impossible to find someone who could embody Smith’s swagger and charm that was displayed in the original sitcom—until they met Jabari Banks. “I’m just naturally charismatic,” says the 23-year-old newcomer. “I’m a people person. The character is a pleaser and that sometimes gets him into trouble. I naturally got into that flow.”

The next pivotal role was that of Carlton Banks, Will’s high-strung cousin who was endearingly played in the original by Alfonso Ribeiro. In the updated version, Carlton (Nigerian-American actor Olly Sholotan) is a big man on campus at Bel Air Academy who hides his crippling anxiety by snorting Xanax in his bedroom. He and Will clash immediately over sports, cultural identity and a very cute girl, but find a moment of grace when Will reveals how he never knew his real dad. (Spoiler alert! Will finally meets him in the finale, but more on that later).

Filling out the cast is Cassandra Freeman as Will’s Aunt Vivian, Adrian Holmes as Uncle Phil, April Parker Jones as Will’s single mother Vy, Coco Jones as Will’s entrepreneurial cousin Hilary, and Simone Joy Jones as Will’s love interest, Lisa. After a false start with their first head writer—Chris Collins stepped down in August 2021—T.J. Brady and Rasheed Newson of The Chi and The 100 fame took over as co-showrunners. Fortunately for them, much of the groundwork had already been laid.

“We had Morgan’s trailer to start from,” Brady says. “A lot of the debates that occur on other shows are over the look and sound, the feel. That was already settled. That’s why people wanted to do this show. In many aspects we were at an advantage because of that trailer. Where the debates come in is how far to push what the characters do. What we did with Carlton, was it too far? How much can Aunt Viv and Uncle Phil argue? And what would those arguments be like? Those were the exploratory things that happened in early outlines and scripts that we tried to navigate.”

“The issues are African American, but the larger stories are universal,” Newson says. “It’s a family story. One thing we did, and I’m proud to say we had to fight for, is that we decided the parents were going to have real meaty stories that didn’t always involve the children. The show could not survive if it was just going to be about the love lives of 16-year-olds. We built something so people who are middle-aged could have something to relate to.”

Realism remained paramount in telling the story of modern-day youths in high school, so Morgan and the showrunners made the bold decision to pepper the dialogue (and use rap music) featuring expletives and the N-word. One of the more memorable moments from the pilot is when Will discovers some of the white kids at school singing an explicit rap song and dropping the N-word without Carlton batting an eye. “Humans cuss,” Cooper says simply. “They curse. We wanted to create authenticity so that’s what hit the screen.”

“I can tell you in the pilot we counted the use of the N-word and cut it back,” Newson continues. “It is a balance of being authentic and also knowing you are turning a lot of people off every time you use that word. The rule that emerged is that it can come up in times of emphasis, in anger, but it couldn’t be like, ‘Hey, N-word.’ You couldn’t enter a room that way. There are a lot of African Americans working on this show and there are a lot of opinions among us. As a lot of things on this show, it became a conversation that we had to have early to just make sure we were being intentional about what we were doing.”

Now, back to that cliffhanger of a finale. Cooper and the writers wrapped the first 10-episode season in March by introducing Marlon Wayans as Will’s long-lost father Lou. Before his unexpected arrival in California, Will was led to believe by his mom and uncle that Lou abandoned his family; in reality, Lou was serving time in prison and never wanted his son to see him behind bars.

“This is one of the things that comes with taking a sitcom and turning it into a drama,” Newson says. “In a sitcom you can gloss over the fact that Will was meeting his rich relations that he hadn’t seen in years. In this one, you have to explain why there was this rift in the family. It’s a natural question, those stories have to come out. When Will was four, his dad was convicted of a violent crime and he was sentenced to prison, and he told Will’s mother and Uncle Phil, ‘Don’t bring my son down here. If you bring him down here, I won’t come out to see him. I don’t want him to see me like this. I grew up seeing my dad in prison and I think it messed me up and I don’t want to do that to my son.’ Uncle Phil and Will’s mother weren’t able to tell a 4-year-old, ‘Your dad is in prison and doesn’t want to see you anymore,’ so they let him think his father had walked out. That’s what they are reckoning with now because his dad is at the doorstep.”

The episode ends with Will storming out of the Bel-Air mansion—the perfect set up for Season 2. Chances are pretty good that the young protagonist will return to the good life (where would the show be otherwise?).

Either way, Cooper is thrilled about the possibilities that lie ahead. “I’ve got a lot of ideas, but I will continue as an executive producer on Bel-Air,” he says, while clearly hoping others learn from his good fortune. “I think for filmmakers in 2022 and beyond we have to be entrepreneurial and create our own opportunities. There is a huge difference between pitching an idea and going out and making it yourself. Believe in the 10,000 hours you put in your craft. Invest in yourself. People will respond.”

Depp Returns To Stand In Effort To Rebut Heard’s Claims: How To Watch