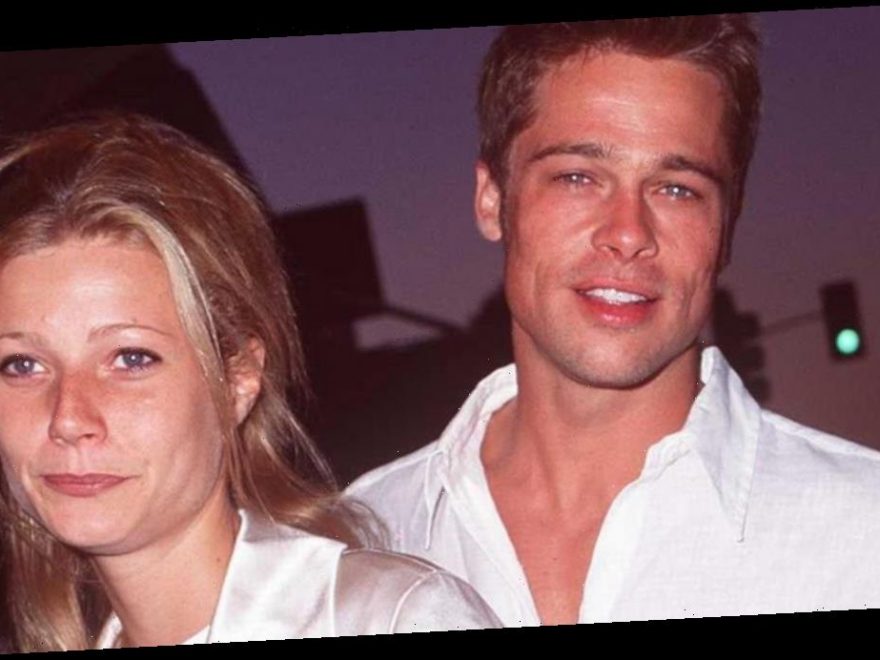 When Brad Pitt and Gwyneth Paltrow first met playing husband and wife in 1995 thriller Se7en, Gwyneth declared it was 'love at second sight'.

He was 31 and one of the biggest stars in Hollywood, she was just 22 and a relative unknown and at first mistook his flirting for friendliness.

Before long everyone on set knew they were an item and a smitten Gwyneth confirmed it to the world when she gushed: "I am properly in love for the first time in my life… and I do not care if my former boyfriends read this."

The couple were obsessed with each other, turning down jobs to cram in every possible second of alone time. When Gwyneth was away on set she drank out of a mug with Brad's face on, and he described the enforced separation from his 'angel' as "A beast. A big hairy beast."

"Really, all I can tell you is I've never been happier," Brad said at the time. "My girl's got class."

Gwyneth's Hollywood director dad Bruce Paltrow loved Brad like a son and movie exec Meryl Poster was one of many who were in awe of the young couple's romance.

"Her love affair with Brad gives her strength. It's not because he's a superstar but because he is completely besotted with her," she told Us Magazine.

"They're so crazy in love. It's like there's enough love between the both of them for everyone in the room."

The fairytale reached its crescendo in December 1997 when Brad proposed after two years of dating in a moment he described as "one of the greatest" of his life.

But that proposal proved to be a flash point for the pair, whose relationship suddenly began to unravel.

The problem, Gwyneth said, was that she got cold feet, fearing that at 25 she was simply too young to settle down.

“I think I was a kid and I wasn't ready. He was too good for me,” Paltrow told The Howard Stern Show of in 2015. “I honestly do think, I was too young and didn't know what I was doing. Admitting their relationship 'wasn't healthy', Gwyneth said certain things happened between the two of them that made her 'hate' herself.

Baseless rumours flew that she had cheated with her Sliding Doors co-star John Hannah. And while Gwyneth never weighed in on the gossip, she did take the blame for the toxic split and the 'darkest moment of it'.

“My kind of internal stuff really tripped up that whole relationship and I felt really responsible and also like I was the architect of my own misery and I just made a big mess out of it," she said.

“I think there were a lot of things that made Brad feel as if Gwyneth wasn’t ready for marriage," she said.

Nevertheless, when the split finally came, Gwyneth was so distraught that she refused to work and almost missed out on her Oscar-winning role in Shakespeare In Love.

She told Vanity Fair: "It really changed my life. When we split up, something changed permanently in me. My heart sort of broke that day, and it will never be the same."