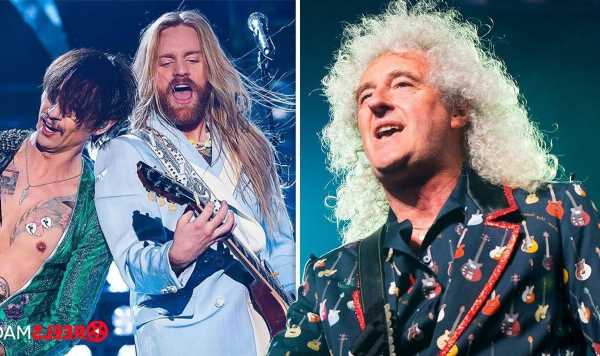 Brian May, 75, heiled the former Eurovision contestant’s New Year’s Eve concert as a “tour de force”. Sam Ryder, 33, wowed viewers across the country after they tuned in to watch Sam Ryder Rocks New Years Eve on BBC One, with some people even branding him a “national treasure”.

The star, who came second representing Britain in the Eurovision Song Contest last year, was also joined on stage by The Darkness frontman Justin Hawkins.

Brian decided to give Sam a well-earned shout-out in view of his 3.1 million Instagram followers.

“Our buddy Sam Ryder totally smashing it on the (our old!) New Year spot,” Brian wrote in reference to his Queen days.

“That was a tour de force, Sam. And you trading guitar licks as well as vocal licks with virtuoso pal Justin Hawkins blew me away.

“AHHHH Brian I love you mate!!! Thank you so much,” Sam responded excitedly with a heart emoji.

Brian wasn’t the only celeb Sam impressed, with former Strictly judge Arlene Phillips commenting: “He is so fabulous.”

Sam also appeared to be thrilled with how the performance went, tweeting in the early hours of this morning: “AND THAT’S 2022 WRAPPED! Blown away by your support of our NYE show.

“Absolutely humbled, thank you all SO flippin’ much!” he continued.

“What if we put a few of the songs from tonight on a special version of the album and released it in the morning??” he added, hinting that fans might have something else to look forward to very soon. (sic)

People took to Twitter today to congratulate Sam on his show’s roaring success, agreeing with Brian that he absolutely “smashed it”.

Joan Collins, 89, ageless in swimsuit as fans praise ‘legs to die for’ [PICTURE]

Esther Beadle wrote: “Can we have Sam Ryder due NYE every year? He’s bloody brilliant, amazing set list, obviously has cracking music taste and it’s the purest level of joy you need going into a new year. (These things are normally sh*** but this is just WONDERFUL).” (sic)

Tom Campbell added: “@SamRyderMusic is having the time of his life on @BBCOne tonight and I can’t help but love him all the more.

“Watching somebody do what they love with such energy, genuinely living and breathing in the moment, is utterly infectious.”

Dr Janina Ramirez tweeted: “Sam Ryder has just become a national treasure! Well done my man x owning this was not easy and you dominated it. Happy new year and may it have an ounce of his joy.” (sic)

“I’m sorry, but that Sam Ryder and Justin Hawkins duet was the best TV moment of 2023, and we’re only thirty minutes in,” penned Emma Thrower, while Bradley Williams added: “Sam Ryder is singing I believe in a thing called love with Justin Hawkins on the BBC and honestly 2023 already peaked!” (sic)

Roz Laws wrote: “Sam Ryder is smashing it on BBC1 now and having the time of his life. I really want to see him live now.

Karl Cunliffe tweeted: “This bloke is living the dream. Belting out Queen and Stevie Wonder tracks without a care in the world.

“He’s a born entertainer and such a joy to watch. Absolute showman. Bravo Sam Ryder.” (sic)