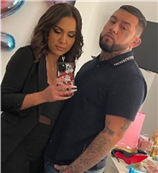 Briana DeJesus isn’t the angriest of all the Teen Moms.

That title belongs the Carolina Hurricane herself, Jenelle Evans.

But Bri is the one who has the lowest tolerance for BS, and who is most likely to simply cut someone loose after they’ve pissed her off or betrayed her.

And the latest to be kicked to the curb by Bri might her former fiance Javi Gonzalez.

Briana and Javi just engaged last month, and DeJesus said that she’d never been so in love.

Just two weeks later, however, it seems the couple has parted ways.

Neither party has made any sort or official anouncement, but online sleuths have made some interesting discoveries about Bri’s recent social media activity.

First, she unfollowed Javi, and he resonded by doing the same.

Then, she hammered the nail into the coffin be deleting all photos of Javi from her Instagram page.

The news comes as a surprise not only because of how brief the engagement was, but also because DeJesus seemed to be genuinely head-over-heels for the guy.

She started referring to him as her “future hubby” just weeks after they started dating.

Briana even threatened to quit Teen Mom 2 simply because Javi did not want to undergo the daily Covid testing that was necessary in order to continue filming.

“I’m navigating and I’m trying and I hope he’s the one. He’s so nice,” she told UK tabloid The Sun not long after the two of them began dating.

“I’ve never met a man this sincere and genuine and that respects me so much.”

Briana spent much of the relationship showering Javi with gifts which he gladly accepted.

And he’ll probably gladly hold on to them, now that the relationship is kaput.

We should note that the breakup is far from official at this point.

This could just be a bad fight that led Bri to lash out on Instagram.

But DeJesus has always been one to hold a grudge, and if Javi did anything to piss her off, it’s gonna be very difficult for him to get back in her good graces.

Javi Gonzalez made his Teen Mom 2 debut just last week (fans have taken to calling him Javi 2 in order to distinguish him from Javi Marroquin, Kailyn Lowry’s ex husband … whom Bri also dated).

Bri has not taken this step with many of her boyfriends, and viewers took Javi 2’s appearance on screen as a sign that the two of them were in it for the long haul.

The two of them even talked about buying a home together, even though Bri just moved into a new place with her mom and sister last year.

We think it’s safe to assume that those plans have been put on hold.

Right now, it’s not totally clear what’s going on with these two, but Briana is known for being totally candid with her fans.

So you can bet that she’ll clear up the situation with one of her signature Twitter tirades sometime in the very near future.