Burger King has brought back its beloved Halloumi King burger – and it has a limited edition spicy sidekick.

The burger, which was initially released as a limited product last July, has now been made a permanent fixture on the fast food chain’s menu.

The original Halloumi King is joined by a new version of the sandwich – the Halloumi Chilli King – which features two fried Cypriot cheese patties in a brioche bun, served with lettuce and a ‘zingy chilli sauce’.

This limited-edition spicy version, on sale for £5.79, is only available until February 18 – so foodies need to move quickly if they want to get their hands on one. 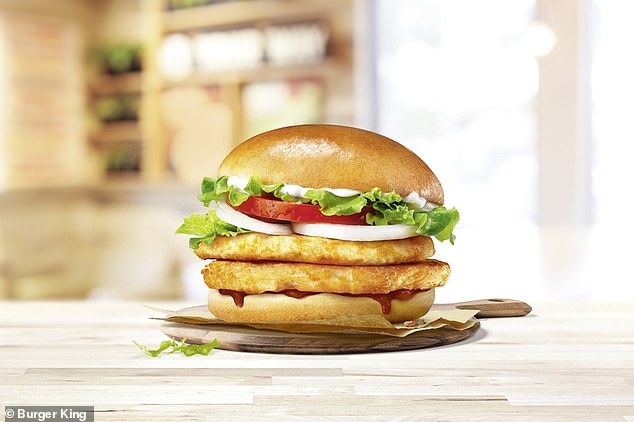 However, the single and double Halloumi King burgers, priced at £3.99 and £7.49 respectively, are here to stay.

Burger King took to Twitter this afternoon to announce the return of the popular burger, writing: ‘IT’S BACK TODAY. TELL EVERYONE YOU KNOW.’

The news was met with elation from social media users, who took to the platform to share their excitement.

One tweeted: ‘Buzzing @BurgerKingUK have brought back the halloumi burger for good!!! My year made already.’

‘Yo @BurgerKingUK! The Burger King halloumi burger is back!!!’ wrote another.

Burger King took to Twitter this afternoon to announce the return of the burger, writing: ‘IT’S BACK TODAY. TELL EVERYONE YOU KNOW’

The news was met with elation from social media users, who took to the platform to share their excitement

And a third simply commented ‘YESSSSSSSSSSS’ in response to the news.

But the Rebel Whopper, which is made from soy, faced criticism after it emerged the burger is not suitable for vegans or vegetarians because it is cooked on the same grill as the restaurant’s beef burgers.

Burger King claimed the burger is aimed at ‘flexitarians’ – people who eat meat but are cutting down on the animal-based food they eat – but vegans say the chain has ‘shot itself in the foot’ and called the product a ‘missed opportunity’.

In addition, a note on the fast food chain’s website informed customers the Halloumi King is cooked ‘in the same oil as chicken and fish’, also making it unsuitable for vegans or vegetarians.