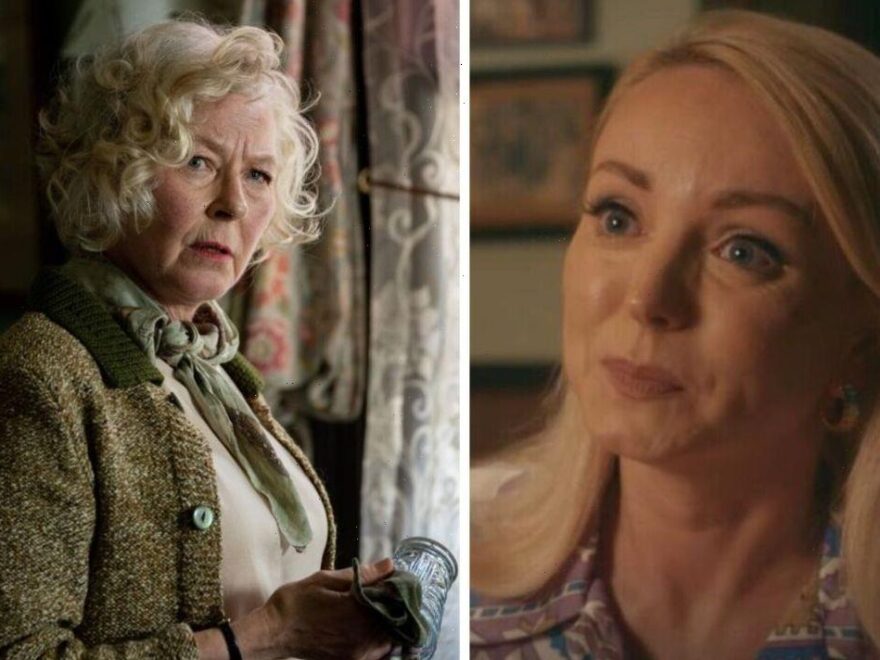 Marking the start of 2023, the BBC staple returned on January 1, and the storylines remained as poignant as ever. One plot saw the nurses assisting a woman dying from cancer while her lodger, who was secretly her romantic partner, tried to keep her at home so they could be together before she died as she would be denied visiting rights. As the story progressed, Call the Midwife fans were in tears and took to social media to share their thoughts on the new series of the BBC staple.

“My lodger, she’s in so much pain,” Jessie Parris (Stella Gonet) told her as she answered the door.

Patrick Turner (Stephen McGann) was treating Olive as she described the pain as being “like a knife”.

She later commented: “I’m a lucky woman, not many people have such an obliging lodger.”

In another scene, Nancy tried to stay on top of Olive’s condition, and it soon became clear Olive and Jessie were a couple.

“Am I right in thinking you’re keeping on top of your pain, Olive?” She asked her.

Smiling at Jessie, Olive replied: “A certain person is keeping me in line.”

After demanding that Olive should remain at home rather than go to hospital, Jessie explained to Nancy how she and Olive had met and become a couple.

As she chatted to Nurse Phyllis Crane (Linda Bassett) and Trixie Franklin (Helen George), Nancy asked: “Is it still illegal like it was for men?”

“So why are they so scared?” Nancy pressed.

Phyllis replied: “Because it’s not laws that rule this country, it’s attitudes.

“There’s no law against unmarried mothers, but you and I both know more about that shame than most.”

“I suppose that’s why Olive doesn’t want to die in hospital,” Trixie pointed out.

“Jessie can’t be her next of kin, so she wouldn’t be allowed extended visiting.

“She wouldn’t be allowed to be there when she dies.”

The storyline had viewers tearing up, and later Olive was able to die at home with her partner by her side.

Many took to social media to comment on the heartbreaking story, with Twitter user @Such_Fun2 writing: “20 minutes in and I’m crying #callthemidwife.”

@talulahbluebell responded: “I know! And it’s only the first episode as well!”

@JadeTandy96 shared: “Oh my they’re a couple! This is gonna be heartbreaking isn’t it? #callthemidwif,” alongside a crying emoji.

@_TVExtra added: “Oh my gosh they’re not actually lodgers they are lovers it’s so beautiful and heartbreaking she’s going to lose her soulmate #callthemidwife.” (sic)

@ArronJustMight tweeted: “Crying my eyes out at #CallTheMidwife.”

“Nah I’m crying for Jessie and Olive and then I’m absolutely raging at this racism story #CallTheMidwife,” @RuleTheW0rld_ commented. [Sic]

Call the Midwife continues on Sunday at 8pom on BBC One.