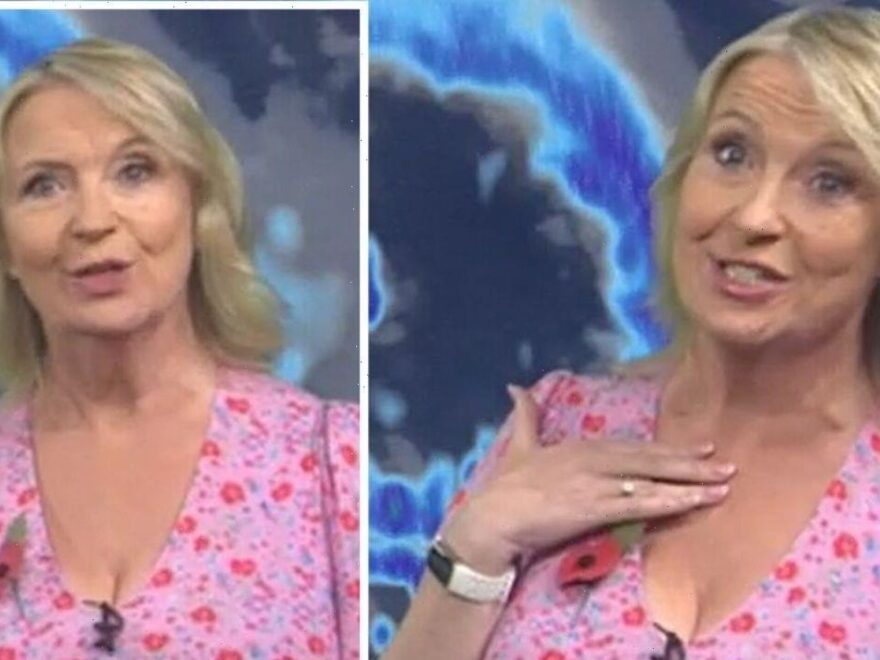 BBC Breakfast’s weather presenter and fan favourite Carol Kirkwood joined presenters Sally Nugent and John Kay to update viewers on the upcoming weather reports across the week. However, during her detailed segment in which she explained what is to come in the upcoming week, including trick-or-treaters out for Halloween tonight, she had to apologise for her croaky voice and explained it was the “singing” she did at the weekend.

Beginning her report, Carol explained: “Through this evening and overnight the showers move north followed in hot pursuit by another band of showers.

“The rain in the west also pushes towards the east so there is quite a lot going, if you are out trick or treating, take your umbrella with you.

“And the wind will be a feature of the weather across the English channel tonight and all areas including the channel islands…” before she coughed mid-sentence.

She continued: “Excuse me. Strong winds once again in western areas and temperatures of 10 to about 16 degrees so very slowly the temperatures are starting to come down.

“I think I did too much singing at the weekend, sorry about my voice! We head on towards the weekend and things do remain quite unsettled,” she expressed addressing her husky voice.

As she ended her weather report, Sally teased: “Carol I have got one very important question to ask you before we let you go, what on earth were you singing?”

Sally exclaimed: “Of course! Bit of Bryan! Was Bryan with you?”

Laughing, Carol quipped back: “Only in my dreams Sal.”

As Carol went off air, John added: “Of course, it was going to be Bryan Adams, who else is it going to be that she was singing.”

Handing back to Rachel and co-star Charlie Stayt in the studio, Carol simply said: “Ruth,” before quickly becoming flustered and noticing her mistake.

Charlie assured her: “It’s alright, it happens. Do it one more time correctly, we’ll pretend it didn’t happen.”

Carol went along with the gag and re-started: “That’s it from me back to lovely Rachel, who is amazing, and Charlie, who’s also amazing.”

Charlie joked: “No one even noticed,” before Rachel brushed off the mistake: “Any old name will do.”

Carol has been a fan favourite on the show since she began in 2011 but recently admitted that she didn’t think she would be on the show in the next 10 years.

She told the Western Mail: “I try not to worry about things I can’t change. I don’t want to go, but one day it’s going to happen.

“Hopefully, it will be natural but I also have to acknowledge I’m 60 and am unlikely to be at the BBC when I’m 70, I would have thought.”

She went on to say she didn’t want to be “using a stairlift” to get around the studio, so would leave when the time feels right.

BBC Breakfast airs daily from 6am on BBC One