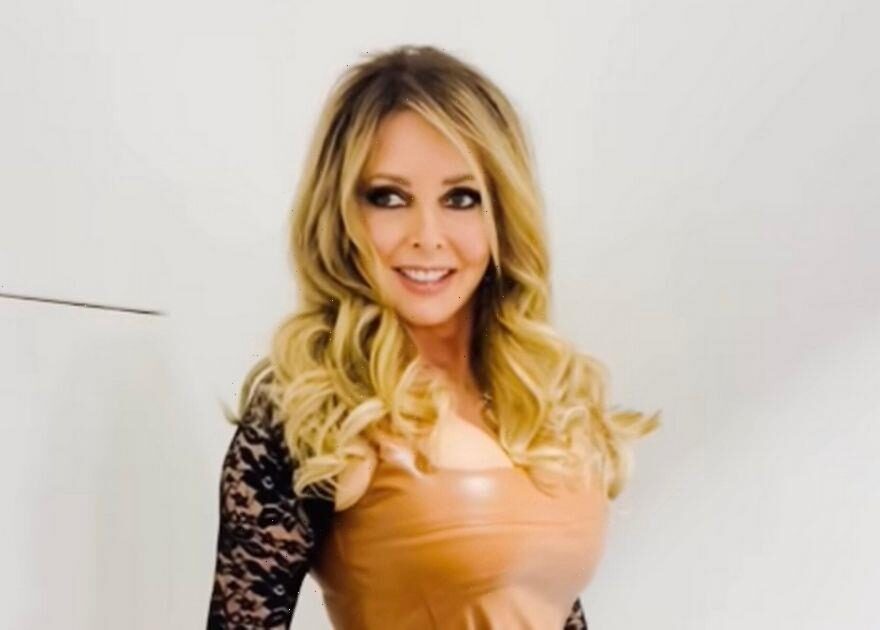 Carol Vorderman was left channeling pop princess Britney Spears as she poured her curves into a tight white dress.

The 61-year-old former Countdown star looked incredible as she headed out to a bar for cocktails.

Carol poured her curves into a long-sleeved ribbed gown with a high collar and pockets in the skirt as the tight-fitting form of the gown clung to her every curve.

Carol let her stunning blonde hair fall in loose curls around her face as she posed with her drink, a brightly coloured cocktail decorated with a candyfloss cloud.

The star upped the ante with her make-up look, framing her eyes in bold liner and dusting highlight and blush high on her cheekbones.

She opted for a full white manicure to match her outfit as she grinned at the camera before ‘cheersing’ the lens with her drink.

In true Vorders style, she had Britney’s Oops… I Did It Again playing in the background.

Later, she enjoyed another round of drinks – one fruity-looking cocktail complete with a cherry on top, and a creamy tipple in a glass ringed with sugar.

It comes after Carol’s appearance on The Big Narstie Show grabbed headlines across the nation as she smacked her own bum while quipping: “Stop staring at my a**!”

Carol donned a brown leather dress for the occasion, worn over a sheer leopardprint top as she completed a rap about her famous hourglass figure.

"When it comes to the math I'm the beauty with the brains, I only get high when I'm flying in my plane."

It went on: “Narstie, I could teach you if you need a class – just don't spend the lesson staring at my a**."

Carol couldn’t resist giving her bum a quick slap for the cameras as fans at home went wild for her incredible figure.

One quipped in return: "I would love to spend a lesson staring at you!"