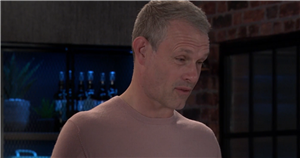 Coronation Street fans were convinced that Gail Platt's son Nick Tilsley was naked in the one hour episode on Wednesday night (December 14).

During a conversation between him, his partner Leanne Battersby and her step-son Simon Barlow, fans flocked to Twitter to point something odd out.

Noticing that something a little strange about Nick's outfit, viewers were completely taken aback and decided to discuss it on Twitter.

Due to Nick's beige thin knit jumper, fans watching the ITV1 soap opera were convinced he had gone completely naked for the scene.

One fan took to the social media platform and penned: "That nude coloured top is a massive no-no, Nick. You look like you've no top on, mate."

While another eagle-eyed fan added: "I thought Nick was naked there for a minute."

"Glanced at the screen – thought Nick was naked," echoed a third viewer.

Luckily Nick wasn't in the buff and fans quickly realised it was just his beige jumper blending into his skin tone.

This came as Nick and Leanne were fretting over their finances when Simon revealed that he had just lost his job.

With Simon's woes adding to their own, Leanne and Nick began to worry as the young boy embarked on a job hunt.

Carla Connor who owns knicker factory Underworld – and who is also loved up with Simon's dad Peter Barlow – then came to the rescue.

The high-flying business woman then gave Simon a job on the Underworld sales team, much to his relief.

But although happy for him, step-mum Leanne is completely unimpressed as he’ll be working with Jacob – who he was once embroiled in a drug dealing plot with.