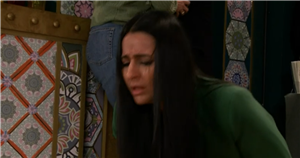 Coronation Street viewers were left rather perplexed during the latest instalment of the popular ITV soap, after Alya Nazir faced a knife brutal attack.

The Corrie resident was left fighting for her life after she came face to face with a racist thug who tried to ensure Maria Connor's refugee event didn't go to plan.

Aiming the knife at Maria, teenager Blake became unexpectedly violent. But trying to save the day once again, Alya stepped in and was stabbed as a result.

But due to the fact that Alya just came out of hospital after saving the street from a lethal bomb, fans began thinking that maybe she could be invincible.

One fan penned: "It's always Alya, she's invincible she's survived a blast she'll be fine from this too."

Another said: "Alya doing her Wile E Coyote again! Blown up by a pack of sparklers, stabbed with a penknife. Tune in next week to see an anvil land on her head."

Meanwhile a fourth viewer shared: "F*****g hell Alya. They’re really using her as a punchbag these past few weeks!"

Blake, who used to be Max's bully, seemed to be influenced by his previous racist antics and wanted to ensure his legacy lived on.

But some viewers thought the racist storyline should have been put to bed when Griff and his gang members were unveiled.

Heading over to Twitter once again, fans urged the scriptwriters to stop.

One angry viewer wrote: "#Corrie what is happening to this programme. It’s total lost the plot with a dreadful racist storylines. Off it’s goes warning or not."

Another said: "I know this storyline about racist radicals is meant to be a good thing & inform, but I’m concerned this might just encourage nutters to do something awful #Corrie."

Meanwhile a third echoed: "Corrie needs to stop with the racist stuff now. The story should have ended after Griff got arrested. What is the point of making Max's mate a racist? When it won't come to much anyway."