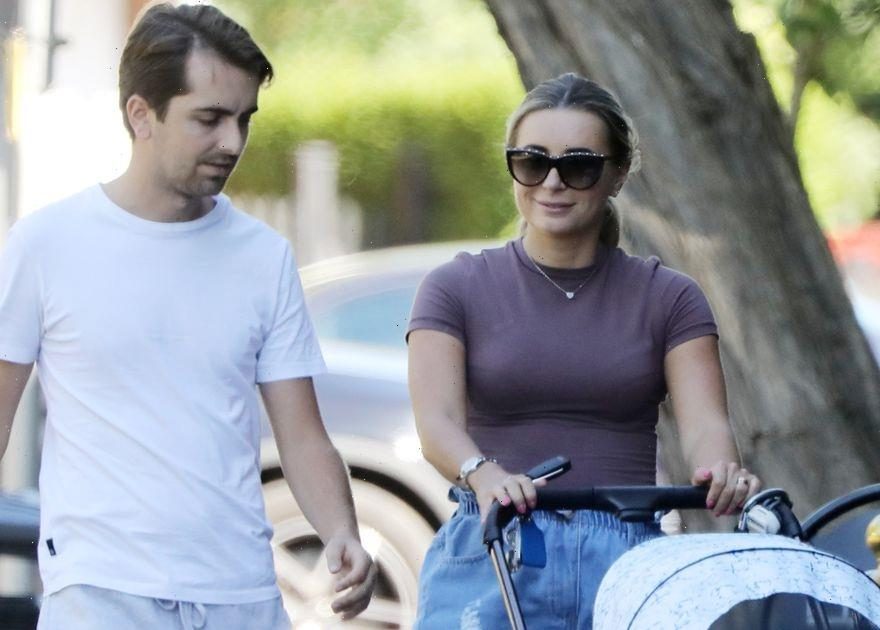 Ahead of her boyfriend's court date this week, Dani Dyer has been spotted having some down time with Sammy Kimmence and their baby boy Santiago.

The Love Island star, who said she was 'missing' her baby bump, headed out for a spot of lunch with her little family-of-three in Essex on Wednesday.

The 24 year old wore a fitted purple t-shirt for the outing, which she paired with some frayed denim shorts.

She opted for a pair of white trainers and had some black sunglasses on while she basked in the sunshine and pushed the baby stroller.

The reality star had her hair swept back in a ponytail and went for a natural make-up look.

The pair seemed to be in good spirits as they chatted away, while Santiago slept in his stroller.

The couple's day out comes as Sammy prepares for his court date hearing which is set to happen on Friday 11 June.

In April, the dad-of-one appeared at Portsmouth Crown Court where he pleaded guilty to scamming two pensioners out of almost £34,000 by posing as a financial advisor.

He previously pleaded not guilty to the crime but changed his plea while appearing in court once again.

Portsmouth Crown Court heard how Sammy's victims were legitimate clients from an investment company where he used to work, with him taking them on when the business stopped operating.

It was then that he falsely claimed to two pensioners that he was authorised to provide financial services, taking £33,919.

After pleading guilty to five counts of fraud, Sammy was told by the judge how his offence were serious enough to cross the custody threshold and could land him a prison sentence.

It's also a big week for Dani next week as she she makes an appearance on Eastenders alongside her dad Danny Dyer.

The reality star, who previously enjoyed a beach day with her family, will make her debut on the soap on Monday 14 June.

She will play a cameo role of Jeanette, a heavily pregnant taxi driver tasked with getting Mick Carter to the hospital.