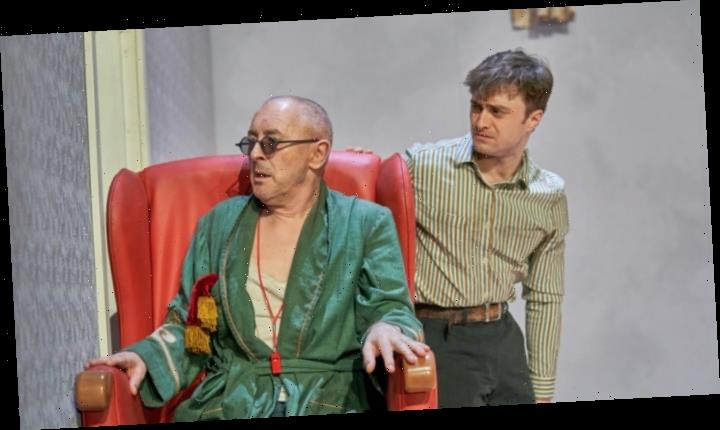 Jones’ hallmark energizing of the stage — there’s never a slack, uninvestigated moment in his productions — is apparent from the word go in what is effectively the 25-minute curtain-raiser that is “Rough for Theatre II.” Although tonally different, the play’s idea is not dissimilar to the angel assessing the life of James Stewart’s George Bailey in “It’s A Wonderful Life.” Here, dressed in dark suits, Cumming and Radcliffe play middle-managers assessing and accounting for the life of the man we see standing at the back of the set, facing away from the audience, perched on a high window-frame. Will he leap to his death?

Beckett’s estate-holders legendarily insist upon productions following the (very many) stage directions to the letter, so it’s no surprise that Jones follows the business Beckett minutely details. But he invests action not just with exactitude but dynamic energy.

Clov is described as having a “stiff, staggering walk,” so Radcliffe’s hobbled gait as he clambers repeatedly up and down ladders in an attempt to look out of the two high windows is not just technically correct but, in Jones’ meticulous hands, a perky (near) silent comedy routine.

Those others include his tender parents Nagg and Nell who, famously, live in über-Beckett style in dustbins. Popping up to give the perspective of lives long-lived, they are peachy parts with elegantly written soliloquies of sadness, punctuated by stabs of comedy. As Nagg, Karl Johnson is patient and deeply touching in his sense of forbearance, and he’s matched by Jane Horrocks, who ages up about 40 years to play Nell, beautifully besieged by memory. The moment where they lean towards one another to try to kiss is shockingly heartbreaking.

Wisely, the website for the Old Vic indicates that the play is only suitable for audiences 14 and up, a clear attempt to dissuade young Potterheads from turning up and being entirely baffled. The limited run has nonetheless already mostly sold out. Beckett novices may be thrown by what they see, but Jones’ winning combination of honoring text without the usual painful high-seriousness makes for a surprisingly engaging, if not entirely successful, evening.