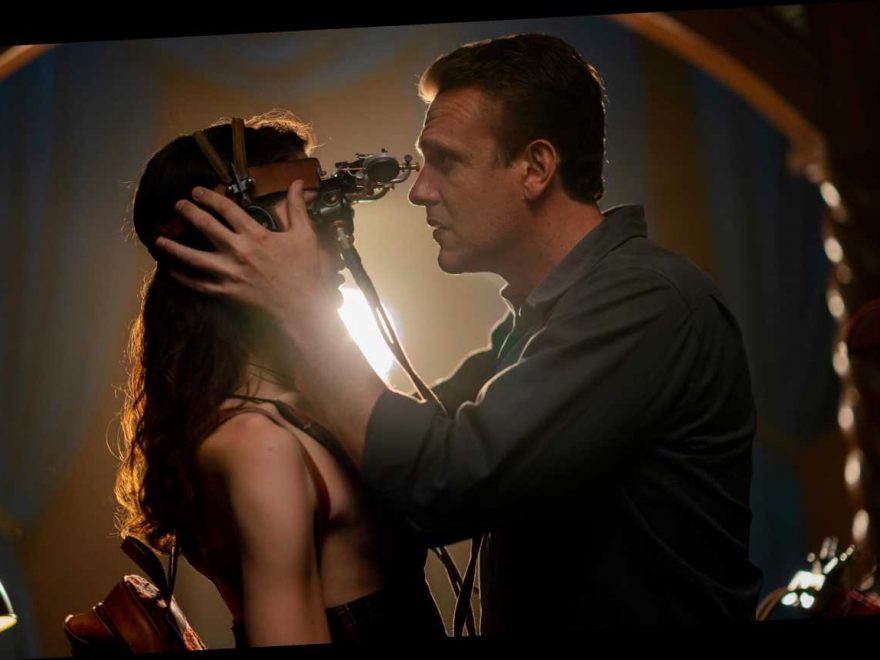 You know those days when you step out the door and it feels like the humidity has slapped you across the face, just in case there was any doubt how hot it was outside? That’s exactly how the quirkiness of AMC’s new series Dispatches From Elsewhere hits you.

From the opening scene — a static shot of character actor Richard E. Grant, clad in a green checked jacket and black turtleneck, seated in front of an orange wall, staring at us in the audience for an eternity, before announcing, “And now that I have your attention, I’ll begin” — Dispatches leaves no doubt that it will be self-consciously weird. The series needs normality like a fish needs a bicycle — and that’s even before three of its heroes try to use a party bike to chase down a limo that has Andre 3000 locked in the trunk. It’s a show so aggressively twee, Pushing Daisies creator Bryan Fuller would look at it and say, “That’s a bit much.”

The oddness of it all shouldn’t be surprising once you learn the series (a planned anthology, with each season telling a different story) was created by its star, Jason Segel. From the day the teenage Segel was cast as wannabe drummer Nick Andopolis on Freaks and Geeks, he has made a comic art form of lingering on the border between sweet and creepy. With his gangly frame, broad smile, and aw-shucks demeanor, he’s a master of playing nice guys who never realize when they’ve gone too far. Though he’s best known for playing How I Met Your Mother straight man Marshall Ericsen, Segel used that celebrity to write himself roles that take advantage of his inner goon, like the overly-emotional dumpee in Forgetting Sarah Marshall or a puppet’s brother in The Muppets.

The conflict between convention and eccentricity is at the heart of the 10-episode Dispatches, especially with the character Segel has chosen to play: Peter, a cubicle slave at a Philly-based tech company who’s so normcore he barely seems to have a personality at all. He floats through life with no opinions, no passions, no color of any kind, save for some of the dialogue in the Law & Order: SVU reruns he watches before bed. As Grant’s character — soon revealed to be an evil CEO named Octavio, because of course he is — explains to us as part of that striking opening sequence, Peter has “a life without risk, a life without real pain, a life without real joys. This is existing, not living.”

But then Peter’s existence turns into genuine living when he stumbles across a rivalry between the Jejune Institute, a think tank promising to reveal that Peter was meant for more than mundanity, and the Elsewhere Society, a collective of anarchists who extol the power of “divine nonchalance” and insist that Jejune is really about maintaining the boring, conformist world Peter is so eager to escape. As he tries to figure out which side he should be on, Peter is teamed up with a trio of fellow lonely-hearts: museum docent Simone (Eve Lindley), an anxious older woman named Janice (Sally Field), and the mysteriously wealthy Fredwynn (Andre Benjamin, in his first TV role since ABC’s American Crime). Each has their own reason for wanting to get involved in this feud, as well as their own belief about what’s really happening and whose side they should be on.

In the series’ opening sequence, Octavio says, “Well, dear viewer, our entertainment has something for everyone, I assure you.” But as Peter and his new friends take part in inexplicable stunts involving curious, often borderline-magical technology — Janice is whisked back to her wedding day via virtual reality that allows her to debate her younger self, while Simone learns about the Elsewhere Society through an animated film that Peter powers by riding an exercise bike — one wonders whether Dispatches has something for everyone, or just something for a very small slice of the population tuned into a very specific frequency. As Janice puts it, while relating her latest adventure to a loved one, “You would’ve hated every minute of it. The whole thing is completely bizarre!”

AMC has some history with inscrutable shows that are more about the value of human connection than traditional plotting. But the whimsical style of Dispatches doesn’t automatically feel like a natural salve for viewers mourning the cancellation of Lodge 49, and there are stretches where the new show is clearly high on its own supply.

Segel structures the early episodes so that each is told from the POV of one of the four leads: Peter, then Simone, then Janice, then Fredwynn. (Yes, his name really is Fredwynn, and there is even a “That’s why there’s a ‘win’ in Fredwynn!” joke in his episode. Delivered by Fredwynn himself, naturally.) This makes sense as a way to ground all the divine nonchalance in some recognizable emotion, but the spotlight episodes are a mixed bag. Segel’s fundamental absurdity, for instance, makes Peter’s studied blandness feel like a put-on, which undercuts attempts to suggest romantic tension between him and Simone. Control freak Fredwynn also feels like a collection of amusing tics more than a human being, and by the time we get to his episode, the show seems impatient to move the story forward(*).

(*) In that long introductory monologue, Octavio promises to skip the usual narrative throat-clearing of modern serialized drama and get straight to the story. This is appreciated early on, but the POV structure of the opening episodes means we experience certain moments multiple times. One step forward, two steps back.

Though Simone describes herself as “like, bitter Amélie or something,” she’s the character who comes across as the most grounded and complex, and thus as the most appealing guide through this lunacy. She is trans, and perpetually afraid of being judged for it. One of the smartest choices Segel makes, at least in the initial chapters, is not to address whether her new friends think she’s a cis woman. Octavio’s monologues at the start of each episode ask the viewer to imagine they are that hour’s protagonist; by leaving the others’ view of Simone a mystery, it only enhances our understanding of how paranoid she is that this will be the moment her least favorite subject comes up. Eve Lindley’s been playing small TV and movie roles for the past few years; this feels like a deserved breakout for her.

Segel directed the first episode as well as writing it, and he sets an appealingly colorful visual template for the hours that follow. Even when Dispatches seems much too in love with itself, it’s a very pretty show to look at, particularly in its use of distinct Philadelphia locations. And every time the series risks disappearing inside its own navel, someone will make a joke acknowledging that Segel knows the show is a bit overstuffed. Simone, considering alternate theories of what the two rival groups are up to — and whether they are, in fact, the same group — quips, “I liked the magical realism stuff a lot more than the ‘Illuminati data-mining my imagination’ stuff.”

Does Dispatches From Elsewhere earn its quirkiness? It’s hard to tell based on the limited sample of episodes AMC made available to critics. But it’s not boring, and its optimism is appealing in and of itself. Still, it is a lot. One mysterious character tells our heroes, “Take a look around. There’s magic everywhere, once you learn how to see it.” Dispatches is so concerned with showing us magic around every corner, though, that after a while, it risks feeling like a trick.