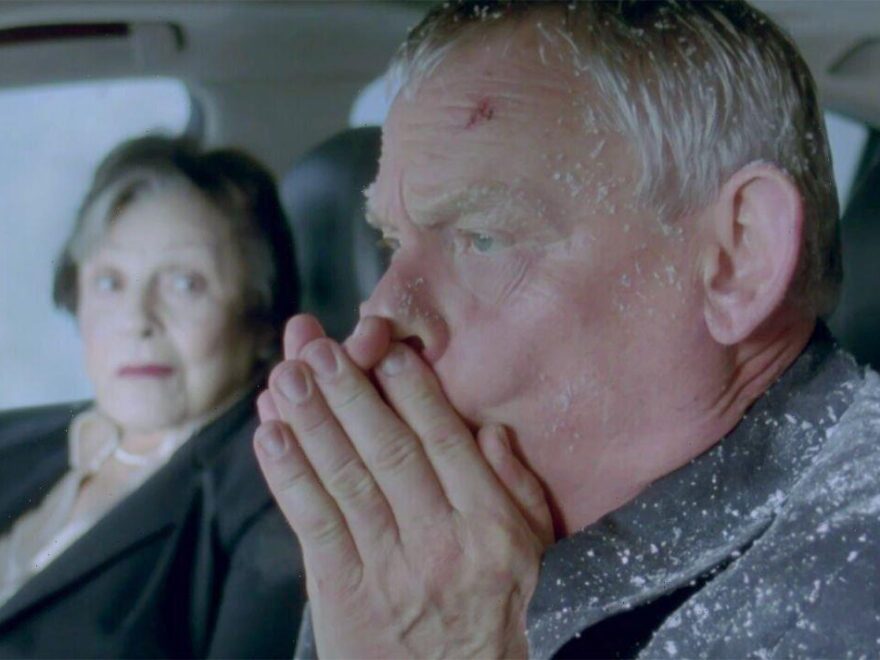 ITV comedy Doc Martin concluded this evening (Christmas Day) with a suitably emotional final which rounded off the story. There was plenty of snow in typical festive fashion as well as plenty of drama with the grumpy GP Martin Ellingham (played by Martin Clunes) treating a series of patients. However, some audience members seem to notice a continuity error with a sudden change in the weather in a matter of moments.

During the episode, the good doctor was trying to help a woman who had had an accident after suffering a fall and being left with a head injury.

The medic rushed to her side to treat her outside with snowflakes lightly falling all around them, however, as Martin was called out to another energy it looked like things had drastically changed.

Martin seemed to be caught in an arctic blizzard and his car crashed during a snowstorm with heavy drifts of snow all around him.

Despite suffering from hypothermia and hallucinating about his recently deceased mother, Martin eventually reached his patient who’d suffered a leg injury and was heavily bleeding.

Doc Martin viewers quickly noticed the sudden weather change with several quickly taking to Twitter to comment on what appeared to be a plot hole.

One person @FrankMKnight posted: “Loving the #Christmas episode of #DocMartin despite the continuity errors.. #Metallic? #Acidic? Sun and snow? Still love it…”

While @SternhammerWulf wrote: “And from a few flakes to entire snow covered roads in the same length of time #DocMartin.”

A third @engteachervng said: “There was no snow when she let the turkey out! #docmartin.” A fourth @DylWynWil added: “Snowmachine City #DocMartin #Kernow.”

Another audience member @laura_alice24 said: “That turkey must be very confused, he went from being in the back of the car on the way to the butchers, to strolling around the countryside on a lovely summers day, to being caught in deep snow and a blizzard, in about 15 minutes. #DocMartin.”

As the episode drew to a close and Doc Martin made it back to the village from the countryside, the snow seemed to have completely disappeared again.

By the time the credits rolled on the finale, there was no snow to be seen anywhere in sight with only a rogue snowflake.

Along with fans noticing the snow situation, many were tweeting about their sadness as the show ending after a decade on screens.

“This feels fresher and newer than in a long time. Can this really be the last? I’m so going to miss #DocMartin.”

While @Livingstone_UK said: “And now the #DocMartin Christmas Special. Portwenn looking so wintery, for the first time. Louisa Glasson looking so good. For the umpteenth time.

“I love Doc Martin. This is definitely the final episode. Providing brilliance since Autumn 2004.”

Clunes and writer Philippa Braithwaite said in a joint statement in 2020 how they had decided Doc Martin had run its course and now it was the right time to finish the show.

The statement said: “When we launched the series in 2004, we could never have imagined how much our loyal viewers would take to the grumpy Doc like they have.

“The series has avid fans both in the UK and throughout the world and we are thrilled that Doc Martin has topped the ratings every time.

“However, after 16 years we now feel that the time has come to say goodbye to Portwenn.”

Clunes and writer Philippa Braithwaite said in a joint statement