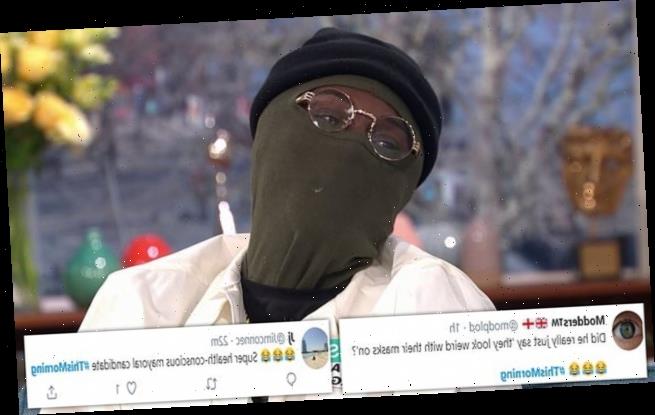 This Morning viewers teased UK rapper Drillminister after appeared on the show with his signature balaclava and claimed it will protect him from coronavirus.

The masked London artist, who is running for London Mayor and never shows his face, appeared on the show to discuss today’s headlines with persenter Beverley Turner, 46, where he shared his view on the recent health pandemic.

Following the news that quarantined tourists were seen lounging by a swimming pool sipping on free champagne at a Tenerife hotel, the rapper claimed that guests were simply being ‘typical Brits abroad’ – but added that they ‘look odd’ wearing medical masks.

He was also teased by Beverly, who joked that he wouldn’t be susceptible to the highly-contagious disease as he is protected by his balaclava, to which he insisted that he has ‘ no time for Corona’. 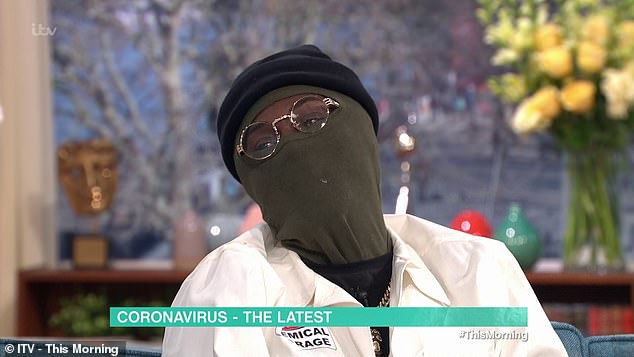 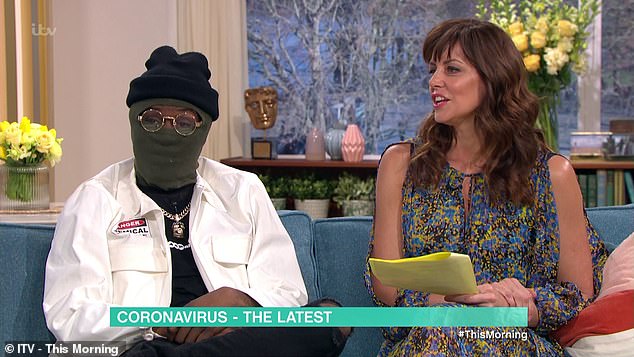 The rapper, who is running for London Mayor, appeared on the show today with Beverley Turner (right) ,46, Prestwich, where he shared his view on the recent health pandemic

Viewers pointed out the irony of Drillminister poking fun at others wearing masks, while others were simply confused at why he had appeared wearing his classic mask, and what appeared to be a lab coat.

‘You’re going be fine in your mask’, teased Beverly.

‘Hey listen’, said the rapper,’ [I’ve got] no time for Corona, not getting that.’

One viewer teased: ‘Why Is this man wearing a balaclava, hat and scientist’s coat? I don’t understand?’ 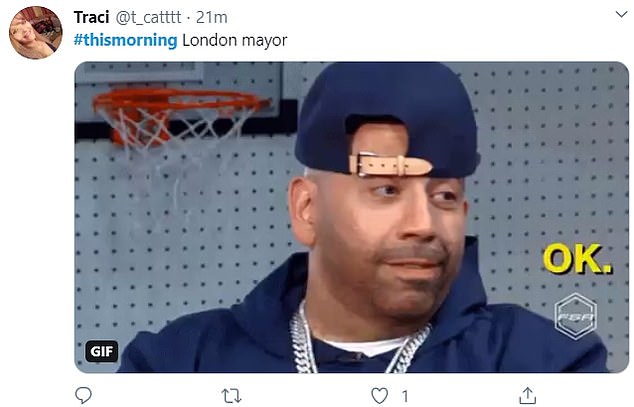 Viewers pointed out the irony of Drillminister poking fun at others wearing masks, while others were simply confused at why he had appeared wearing his classic mask, and what appeared to be a lab coat

Another said: ‘Did we actually find out why he’s wearing a balaclava and a scientist coat?’

TV doctor Hilary Jones has blasted quarantine measures at a coronavirus-hit Tenerife hotel as the Foreign Office said it was keeping the situation under review.

Some 168 Britons are among hundreds of guests being kept at the four-star H10 Costa Adeje Palace in the south-west of the Spanish island after at least four guests, including an Italian doctor, tested positive for coronavirus.

All of those on site were initially told to stay in their rooms but local authorities have now said people without symptoms can move around the hotel, including to the pool and bar.

Guests were sunbathing in masks and enjoying free supplies of food and alcohol at the hotel poolside this afternoon after learning they would be staying well into March. 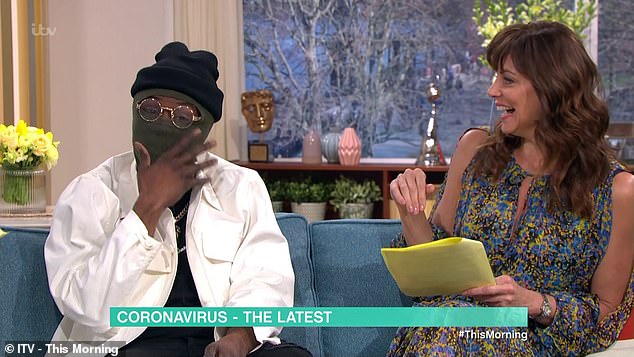 ‘Hey listen, said the rapper,’No time for Corona, not getting that’ when Beverly teased he would be protected from the disease 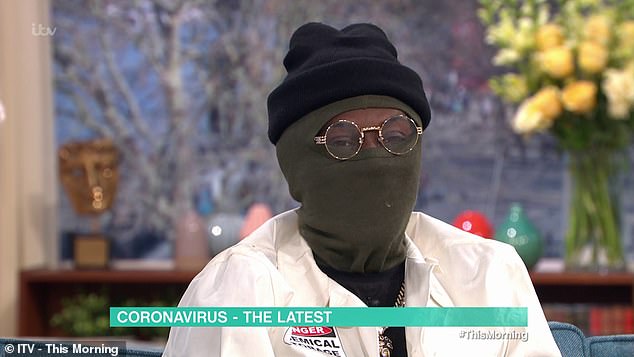 But Drillminister insisted that we’re ‘all forgetting ‘ British people ‘know how to have a drink’, and argued the guests are simply acting as any other Brit abroad would.

He said: ‘I think it’s very British. I think we’re forgetting that British people, we know how to have a drink up,  to get their tan on.

‘I think they’re just being a bit British abroad, it’s looking a bit weird with the masks on.’

Viewers quickly saw the irony of this and took to Twitter to ask whether the rapper had ‘looked in the mirror’. 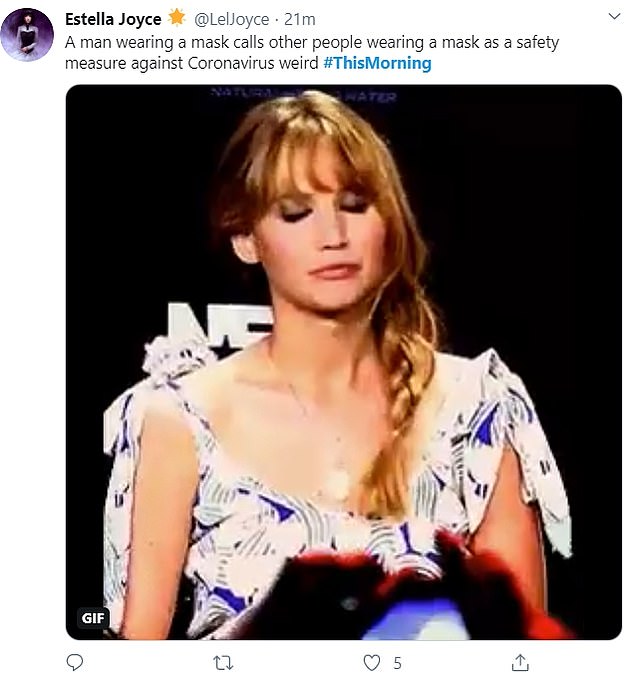 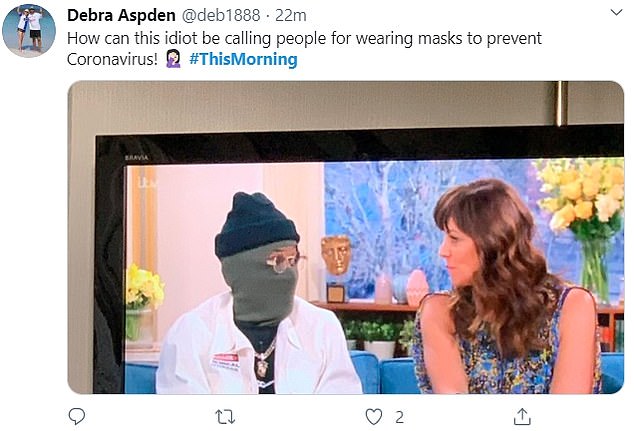 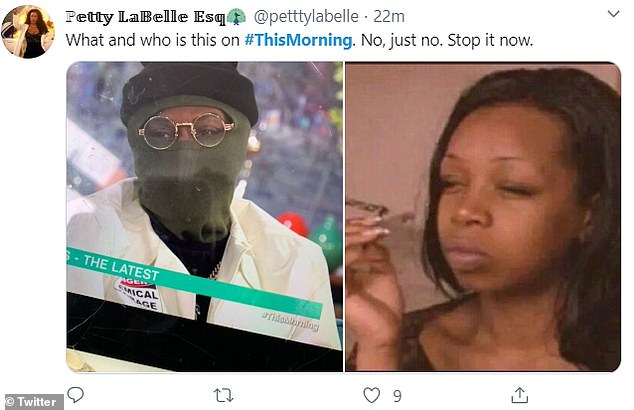 Another pointed out: ‘Did he really just say ‘they look weird with their masks on?’

A third agreed: ‘Weird with the masks he says, taken a look in the mirror?’

Elsewhere, Drillminister shared his view on Harry and Meghan, explaining that he ‘doesn’t care’ about the pair after moving to Canada, as ‘Buckingham Palace is on home soil’ and will focus his attention on Prince William instead.

He said:  ‘Listen I’m running for London mayor I care about Buckingham Palace, I care about , what is going on on home soil.

‘I don’t care about away games.  If you’re in Canada, you’re playing for Canada’s team, you’re not playing for this team.

‘I care about this team what’s going on in London, William you’re my forward. Listen if you’re on my team, you’re gonna win.(sic)’