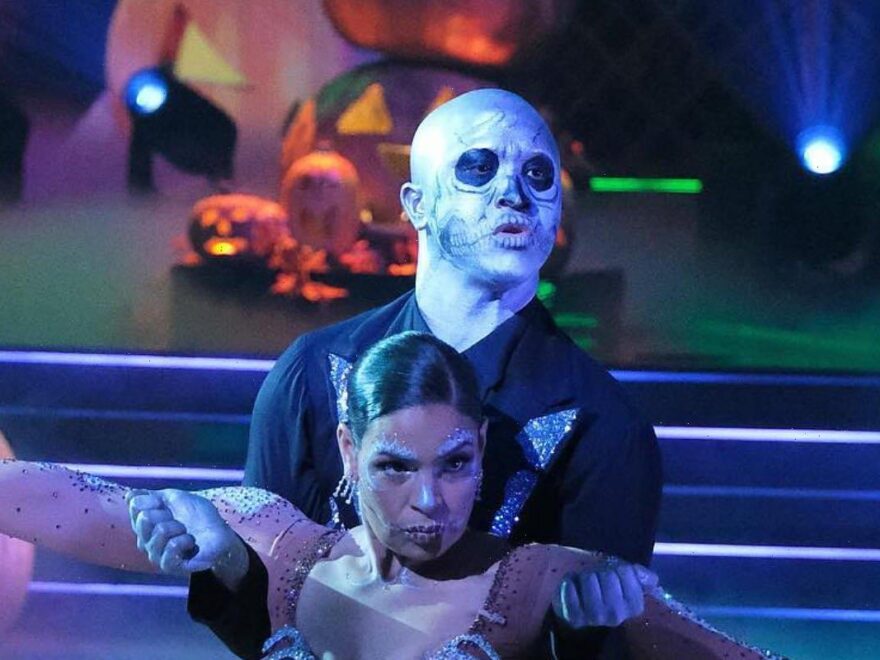 In the new episode, they perform in two rounds of dancing as the first round sees the dancers dancing the usual set of new dances, while the second round features them dancing in teams.

AceShowbiz -It’s time to get spooky. Celebrity contestants in “Dancing with the Stars” season 31 returned on Monday, October 31 to celebrate Halloween. In the new episode, they competed in two rounds of dancing. The first round saw the dancers dancing the usual set of new dances, while the second round featured them dancing in teams.

Jordin Sparks and Brandon Armstrong kicked off the first round with a Tango to “Oogie Boogie”. For the “Halloween Night”, the pair dressed in skeleton costumes and also incorporated some spooky instances into the choreo. Len Goodman called the routine Jordin’s best dance so far. Carrie Ann Inaba, meanwhile, noted that Jordin had improved on almost every aspect. Jordin got 36 out of 40.

Up next were Charli D’Amelio and Mark Ballas. The two danced an Argentine Tango to “Tanguera” and impressed everyone when Charli was being exorcised down the bed and across the dance floor. Derek Hough praised “The Exorcist” moment, adding that he enjoyed this smooth version of the dance. As for Bruno Tonioli, he said only these two could turn a nightmare into a beautiful dance. The pair got 39 out of 40.

Dancing a Paso Doble to “bury a friend” by Billie Eilish were Daniel Durant and Britt Stewart. They brought a zombie video game concept and Bruno thought that Daniel played this game very well. Carrie Ann loved the characterization, but she criticized his shaping and footwork. Daniel was given 34 out of 40.

As for Shangela and Gleb Savchenko, they opted for a Jazz to “Look What You Made Me Do” by Taylor Swift. The pair, who made terrifying dolls, took the dance floor to offer a super creepy dance which Carrie Ann dubbed Shangela’s best performance. Derek, meanwhile, believed that he’s going to have nightmares about them. The spooky routine gave Shangela a perfect score.

Vinny Guadagnino and Koko Iwasaki, meanwhile, danced a Pose Doble to “Get Ghost” by A$AP Ferg, Mark Ronson and Passion Pit. Bruno thought there was nothing toxic in the routine. Meanwhile, Carrie Ann told Koko that the choreo was too blocky for a dancer like Vinny. The judges gave Vinny 30 out of 40.

Following it up were Heidi D’Amelio and Artem Chigvintsev who danced a Tango to “I Wanna Be Your Slave” by Maneskin. Derek gave the pair a standing ovation and said that it was Heidi’s best dance. Len said that Heidi offered really good performances every week, but he wanted her to push it a little more. Heidi got 37 out of 40.

Dancing an Argentine Tango to “Shivers” by Ed Sheeran were Gabby Windey and Alan Bersten, who replaced Valentin Chmerkovskiy after his COVID-19 diagnosis. The vampire-themed dance was impressive with Bruno calling it a feast for the sense and praising her legs. Carrie Ann noted that she could see Gabby pouring her heart into the dance. Gabby earned 38 out of 40.

Wayne Brady and Witney Carson then danced a Contemporary to “Halloween” theme song. Of the routine, Len said it was powerful and full of energy. Bruno, meanwhile, dubbed it an absolutely clever routine. The judges gave Wayne 37 out of 40.

Also dancing to a Contemporary were Trevor Donovan and Emma Slater. The dance was breathtakingly stunning as Len said that Trevor came back stronger this week. He also complimented the soft, lyrical and musical performance. Carrie Ann called it an amazing dance and said that she had a moment she’ll never forget. Trevor got 39 out of 40.

It was time for team dances. The first team, named Team Wicked, included Vinny and Koko, Jordin and Brandon, Heidi and Artem, Gabby and Alan, as well as Shangela and Gleb. Derek said it was a solid team dance and that they set the mood very well. Bruno, meanwhile, thought it was a good group effort though he could see some mistakes. The team got 33 out of 40.

As for Team Scream, it was made up of Trevor and Emma, Wayne and Witney, Daniel and Britt, as well as Charli and Mark. Derek said, “Team Scream, LET’S GO!” Bruno loved the routine as he complimented the entire piece as a whole. Carrie Ann echoed the sentiment, saying it was really, really amazing for so many reasons. The team earned 39 out of 40.

The results were then revealed with Jordin & Brandon and Heidi & Artem being in the bottom two. Unfortunately, the pair went home that night were Jordin and Brandon.