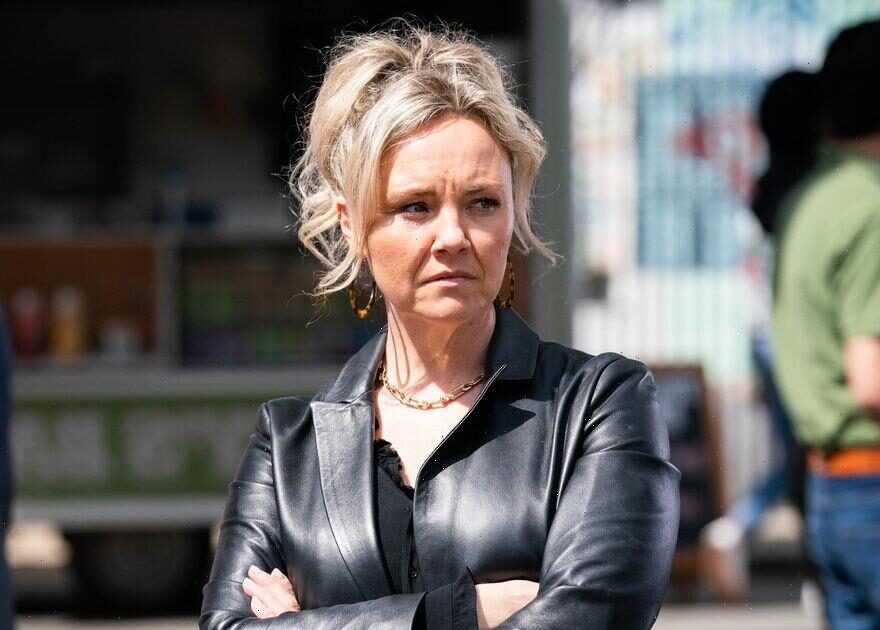 Janine Butcher puts Mick Carter under pressure this week in EastEnders this week, after she urges him to buy Linda Carter's share of the Queen Vic pub.

However, she is left horrified after Mick suggests that they sell up and start afresh elsewhere – dashing her hopes of recreating the Butcher's family childhood.

However, Mick insists that they sell the pub to Linda or everything stays as it is.

Are the walls finally starting to collapse around Janine? And how will this affect her relationship with Mick?

With their relationship potentially hanging in the balance, Daily Star takes a closer look at the theories surrounding Janine – from being haunted by her late husband Barry, to a murder plot involving Mick.

Janine's daughter Scarlett confronted her mum in recent episodes, after she noticed Janine had been "acting weird" since the car crash.

Janine had made out that Linda was driving drunk behind the wheel, when it all actuality it was her who was driving.

Ever since Scarlett became suspicious of her mum, many fans think that she might expose the truth about the crash, with one fan saying: "She shot herself in the foot by causing that crash. Clocks ticking for Janine now and I can't wait for her downfall. What I'd give for Scarlett to expose Janine."

Viewers think the truth will be exposed in time for the Christmas episode too, with a second commenting: "I think this is the perfect time for Mick leaving, Linda possibly remembering what actually happened before the crash and Janine getting caught," adding: "The drama would be amazing."

"I hope Janine's comeuppance is the Christmas storyline this year. It's going to be so delicious when everyone realises she was the one driving the car, not Linda," said a third.

His exit news has left viewers wondering how he will depart the soap – and some fans think that they have already 'worked out' his fate.

One fan spotted that Mick was still wearing his wedding ring, despite being in a relationship with Janine, which could be a sign that he will get back together with Linda.

One fan said: "But why is he wearing his wedding ring again? I thought when he took that off after speed dating that would be it. He's dating Janine too. Bit odd."

"Mick and Janine have no chemistry. Put him back with Linda please," begged another, while a third commented: "C'mon Janine, you're not stupid. Face facts, you're not Linda."

If Mick were to rekindle his romance with Linda, this would surely anger Janine.

Could Janine decide to take revenge on Mick and kill him for possibly ending their relationship? Fans seem to think so.

"I'm surprised Janine hasn't bumped off both Mick and Linda yet and buried them six feet under the Queen Vic," said one fan.

However, other fans have predicted that the tables could be turned – and that Janine could be murdered instead.

"With Danny leaving soon I hope they don't kill Mick off because with everyone thinking Janine will kill him will be boring tbh. But imagine if Mick actually ended up killing Janine by accident and was sent to prison for life!" added a second fan.

A third commented: "I don't think they'll kill Mick off despite Janine having form for killing people. I'd like to think the door will be left open for him."

Following Janine's explosive return to the square last year, fans have predicted that one part of her past may come back to haunt her – the murder of ex-husband Barry.

Barry was head over heels for Janine, but her love was all a front, with the truth finally being revealed during their honeymoon in 2004 – when Janine pushed Barry off a cliff.

Now fans think that if Janine's downfall doesn't come following her and Linda's near-fatal car crash, Barry's son could return to take revenge on her for his father's death.

That's not all, as they have also predicted that Barry's ghost could come back to haunt her – which would not be a surprise, as a number of characters including Pat Butcher have returned as ghosts in the past.

One fan said: "Janine inherited his money leaving his son Jack with nothing. Janine is back on the square and Jack would be 19 – perfect revenge storyline for Janine to be haunted by not only his on but Barry in ghost form."

A second added: "I think it will all end badly with Janine though."

Ricky and Janine take over The Queen Vic

EastEnders bosses recently announced that Sid Owen would be returning to the square as Ricky Butcher – leaving fans speculating about the reason behind his sudden arrival.

It is reported that Ricky will be involved in a huge storyline involving sister Janine and ex-wife Sam Mitchell, with some predicting that Ricky is returning to help keep Janine on the straight and narrow following the near-fatal car crash.

Janine had already called Ricky earlier this year to borrow money, and some fans think she might be the reason he is returning to the square.

One said: "Looking forward to his return even if it is only for a while. It'll be good to see him again, he was a great character. Excited for what this means for Janine also."

A second added: "Janine needs to be kept on a straight and narrow path. Hopefully we'll get some softer Janine scenes with Ricky's return."

However, another theory published recently in The Daily Express suggests that Ricky's return will coincide with Danny Dyer's departure as Mick Carter – and that Ricky could take over The Queen Vic.

One fan predicted that Janine had her eyes on the pub, saying: "The old Janine would have taken the Vic from the Carters from right under their noses."

If Janine does have her eyes on The Queen Vic, Ricky's return could be a sign that she and her brother are plotting to take over the famous landmark.

But will ex Sam Mitchell get in the way and try to steal it from them in memory of late mother Peggy? Watch this space.

EastEnders airs Monday to Thursday on BBC One at 7.30pm