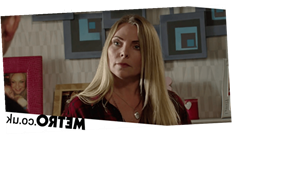 A brand-new production of Dial M for Murder — which opened at Richmond Theatre on January 14th 2020 — is touring the UK this year, and actress Samantha will be portraying the role of Margot Wendice — wife of protagonist Tony Wendice, an ex-tennis pro portrayed by Casualty and Holby City star Tom Chambers — who also recently appeared in Emmerdale.

Samantha takes over the role of Margot from Sally Bretton from the 14th April, in Milton Keynes where she tours with the company to Birmingham, Cardiff, Leicester, Sheffield, Liverpool, Mold, Brighton, Shrewsbury and Salford, before her stint concludes in Northampton on June 27th.

The actress is, of course, best known for portraying Ronnie Mitchell in the BBC One soap — a role she held for ten years between 2007 and 2017, bar a short break in 2011 after the character was sent to prison.

During that time, Ronnie became one of the most beloved characters Albert Square had ever seen, and featured in numerous unforgettable storylines, from her search for daughter — who turned out to be Walford resident Danielle Jones (Lauren Crace)— to her long-running relationship with Jack Branning (Scott Maslen).

The character met her demise in shocking scenes back in New Year’s Day 2017 when both she and her sister Roxy (Rita Simons) drowned on the former’s wedding day.

EastEnders continues Thursday 13 February at 7:30pm on BBC One.