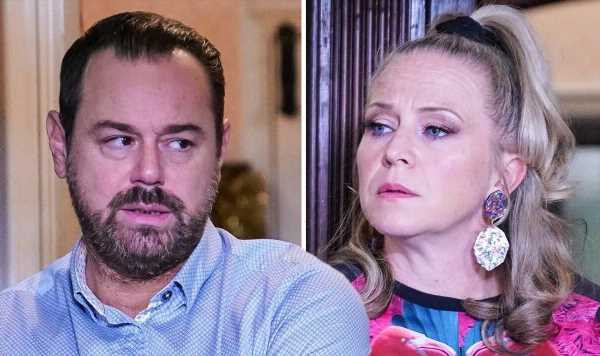 Linda Carter (played by Kellie Bright) has got herself back on her feet after almost having baby Annie taken away from her for good when she relapsed earlier this year. However, the mum-of-five will be left crushed when she’s forced to spend Christmas alone following the return of Jada Lennox (Kelsey Calladine-Smith).

EastEnders fans will remember Jada left Walford under a cloud.

The young mum was blackmailed by Janine Butcher (Charlie Brooks) into planting evidence on Linda.

Jada confessed to Sharon that she’d planted the evidence but failed to admit Janine was behind her actions.

Next week, Zack reminds a frustrated Linda about how much Sharon misses her granddaughter.

Linda decides she wants to be there for her friend and steps aside.

But as Linda declares she’ll make herself scarce, could this mean she’ll spend Christmas alone?

It’s clear she wouldn’t be welcome over at the Vic with Janine by Mick’s side.

Linda has come a long way this year and may secretly spend Christmas alone to avoid anyone feeling upset on her behalf.

Will the truth about Janine’s cruel actions finally be exposed?

She said: “Linda’s world has crumbled, it’s in tatters, but I think she’s resigned to it.

“From the moment she knew Mick and Janine were having a baby together, that was it because Linda knew Mick was never going to walk away from a child.

“The baby changes everything no matter what she thinks or says about Janine. Before the wedding, Linda had already let Mick go, but there is a shock and finality of Janine being the new Mrs Carter.”

“That’s what Linda has always been, so it’s another turn of the knife,” Kellie added.

EastEnders fans will say goodbye to Mick at Christmas as Danny Dyer’s exit from the soap was confirmed earlier this year.

Speaking about what it was like saying goodbye to Danny, Kellie shared: “There were lots of tears on and off screen from me! I’m terrible at goodbyes anyway, and I hate change. It does feel like a massive end of an era.

“To have someone in your life on a daily basis for nine years and then to have to say goodbye to them is tough. I still speak to Danny all the time, and I’ll still see him, but it won’t be the same.”

EastEnders airs on BBC One from Monday to Thursday at 7.30pm.