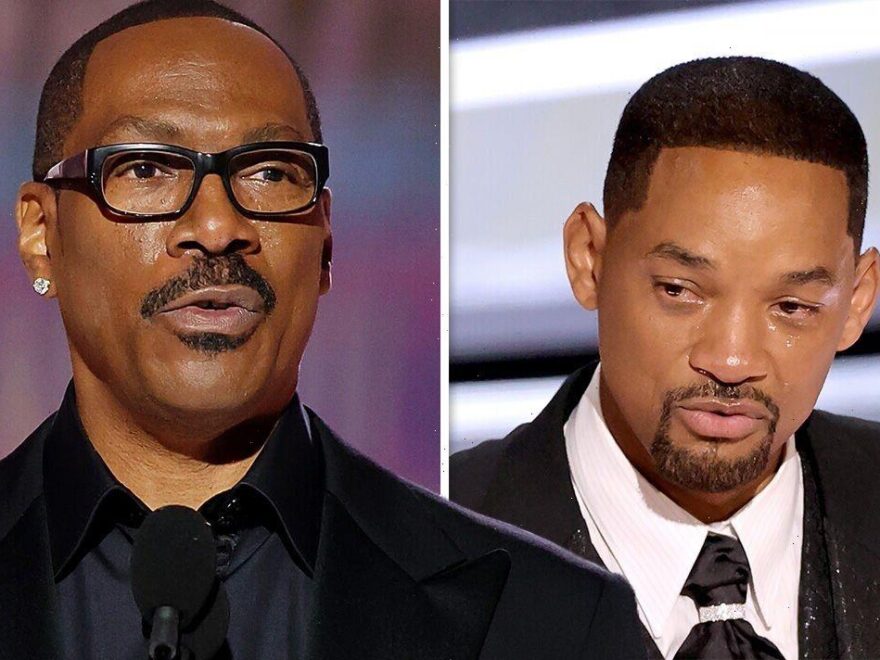 Comedic actor Eddie Murphy, 61, made a joke about Will Smith, 54, during last night’s glitzy Golden Globe Awards. The Beverly Hills Cop star made reference to the Independence Day actor’s infamous on-stage slap at the 2022 Oscars.

The Trading Places actor was honoured with a lifetime achievement award at the star-studded event yesterday.

As he made his way on stage, the comedian offered up some simple advice for young creatives making their way in the film industry.

“I want to let you know that there is a definitive blueprint that you can follow to achieve success, prosperity, longevity… Just do these three things,” he told the audience.

“One, pay your taxes. Two, mind your business. Three, keep Will Smith’s wife’s name out your f***ing mouth!”

The final quip referred to the controversial moment the Fresh Prince of Bel-Air star slapped presenter Chris Rock across the face live on stage at the Oscars.

Will smacked the subsequently-shocked comedian after he had cracked a joke about his wife, Jada Pinkett Smith.

The actor has since resigned as a member of the Academy and has also apologised for his actions that night.

The joke Chris made was in relation to Jada’s decision to shave her head – something she has admitted felt heartbreaking – although the comedian has since claimed he wasn’t aware of this at the time.

Referencing the 1997 action film G.I Jane starring Demi Moore, who shaved her head for the role, he said “Jada, I love you. G.I Jane 2, can’t wait to see you.”

The comment resulted in Will walking up to the stage and striking the presenter in the face, before returning to his seat and yelling: “Keep my wife’s name out of your f*****g mouth.”

Attempting to regain his composure, Chris said: “Wow, Will Smith just smacked the s**t out of me. That was the greatest night in the history of television.”

Soon after the incident, Will made a tearful return to the stage to accept his Best Actor Award for King Richard, where he made his apologies to those in attendance.

Chris opted not to press charges against Will and has since joked about it in his stand-up routine on multiple occasions.

The morning after the incident, Will apologised to Chris, the Academy and the Williams family for his behaviour.

“I would like to publicly apologise to you, Chris. I was out of line and I was wrong,” he said in a statement on Instagram.

“I am embarrassed and my actions were not indicative of the man I want to be. There is no place for violence in a world of love and kindness.

“I would also like to apologise to the Academy, the producers of the show, all the attendees and everyone watching around the world.”

Meanwhile, The White Lotus and Abbott Elementary led on the TV awards front.