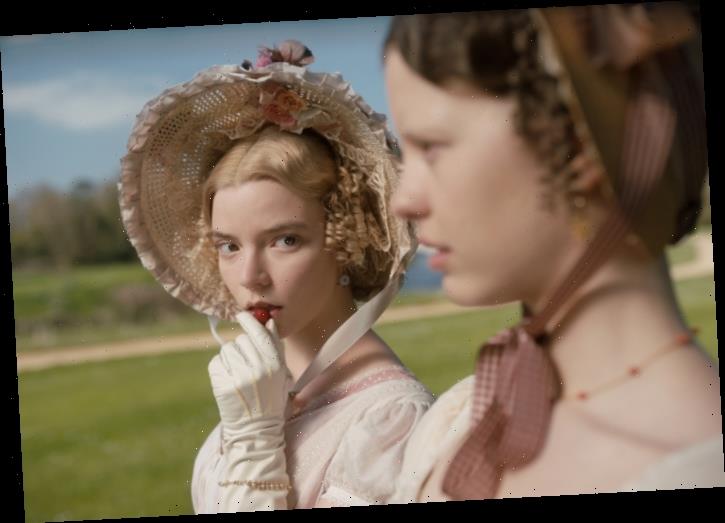 Jane Austen has been through a lot on screen in recent years. From watching details of her own life contorted into a romantic comedy framework in “Becoming Jane,” seeing her most enduring masterpiece invaded by the undead in “Pride and Prejudice and Zombies,” or observing the cottage merchandising and tourism industry that has sprung up in her wake in “Austenland,” one longs to imagine the saltine-dry turn of phrase she might have used to describe the splintering and commodification of her own legacy. But barring that, there’s something quite comforting in seeing her work returned to a more natural habitat: adapted into handsome, clever, faithfully unambitious films like Autumn de Wilde’s “Emma.”

As the film’s title card and poster tell us, the proper rendering of de Wilde’s “Emma” is not simply “Emma” but “Emma.” – period and all. It’s unclear why the filmmakers insisted on end punctuation, especially considering the extreme unlikelihood that this will be the last word on the material. The final novel Austen published in her lifetime, “Emma” has been adapted numerous times before – perhaps most memorably when toplined by first-time leading lady Gwyneth Paltrow in 1996, and more recently by Romola Garai in the BBC’s 2009 miniseries – and this newest addition is an entirely worthy companion, though hardly a definitive take.

Strangely, considering how often filmmakers have returned to this particular well, “Emma” has always been an easy enough novel to tackle, but a more difficult beast to fully capture. It’s both one of Austen’s funniest and least eventful works, and so many of its pleasures come from the subtle tonal sleights-of-hand that she plays on the reader throughout. Emma Woodhouse is a snob – often comically deluded, sometimes casually cruel in spite of her good intentions – but the ostensibly objective third-person narration of the novel (arguably Austen’s most sophisticated employment of her free indirect style) stays so carefully in her corner for most of the book that the reader only recognizes the full extent of her snobbery as the character does herself. Making this work on screen is trickier than it sounds. (And frankly, of all “Emma’s” cinematic interpreters, Amy Heckerling probably found the cleverest substitute for Austen’s tone in Cher Horowitz’s ditzily self-assured narration in “Clueless.”)

For this reason, Emma herself can’t help but come across as a bit of a cipher through this film’s opening stages, played by Anya Taylor-Joy with glamorous poise and a light sheen of frost. Like the book, the film opens as our 20-year-old protagonist is preparing for the wedding of her governess, a pairing she credits to her own matchmaking skills. Content to swan through her lavish country estate while a pair of long-suffering servants attend to the ludicrous demands of her hypochondriac father (played by Bill Nighy in an uncontested layup of casting), Emma is hardly in a rush to find a match for herself, though she follows news of a particularly eligible bachelor, the ever-elusive Frank Churchill (Callum Turner), with discrete interest.

In the meantime, she’s tasked herself with mentoring dewy teenager Harriet Smith (the all-astonishment Mia Goth), a low-born student at a local boarding school whose infatuation with an honorable farmer Emma disapproves of; pursuing a simmering rivalry with accomplished orphan Jane Fairfax (Amber Anderson); and maintaining a semi-flirtatious discourse with her sardonic neighbor and in-law, Mr. Knightley (Johnny Flynn, both figuratively and literally fighting with his stiff, high collar through most of his scenes).

For all her background in photography and music videos, first-time feature director de Wilde rarely goes overboard with ornamentation or style, nor does she dirty up the surroundings in the manner of Joe Wright’s “Pride and Prejudice,” which sought to remind us that Austen’s elegant country lords and ladies were all likely stepping over piles of manure and dodging flocks of farm animals as they took a turn around the grounds. Here, the drawing rooms and gardens are all dollhouse-tidy, though never unduly grand, and the occasional nods toward Wes Anderson-style preciousness in the design – the decorous title cards marking the change of seasons, the red-shawled boarding school girls traipsing through town like ducklings in single-file – are rarely overdone. (If only one could say the same for the score by Isobel Waller-Bridge and David Schweitzer, which keeps asserting itself like an overeager puppy, as though nervous about being missed amidst all of the Mozart sonatas and 18th century hymns on the soundtrack.)

Screenwriter Eleanor Catton does deft work adapting the novel, not only retaining all of the plot points that matter, but also keeping in plenty of the ones that don’t, as this is a story that should always be able to accommodate stray tangents, diversions and flashes of buttoned-down anarchy. As for the latter, several of Miss Bates’ hailstorms of non sequitur sentence fragments survive intact, delivered by Miranda Hart with just the right mixture of ridiculousness and pathos. Likewise, most of the better supporting parts are aced here – from Anderson’s dyspeptic take on Jane Fairfax to Tanya Reynolds’ thoroughly hissable Mrs. Elton. (Mr. Elton, the local vicar with ill-fated eyes for Emma, is somewhat more strangely handled – here portrayed by John O’Connor as a bit of a bumbling incel, when he might more accurately be thought of as a fuccboi.) But as always, an Austen adaptation lives or dies on the suitability of its central coupling, and Taylor-Joy and Flynn have decently charming chemistry together, with the former allowing her icy reserve to melt in slow stages, and the latter (who may strike some Austen formalists as an odd choice for the role) using his rougher, more modern characteristics to give Knightley’s moments of rigor – “badly done, Emma” – a bit of bite.

The question of how much to contemporize an Austen adaptation is always an open one. However many blueprints might exist, interpreting the author will likely only get tougher and tougher as the Regency culture she depicted grows smaller and smaller in the rearview mirror, its customs and mores beginning to more closely resemble curious anthropological phenomena than simply hyper-formal precursors to our own. As Virginia Woolf once observed, Austen was the rare cutting satirist who, at heart, “had no wish for things to be other than they are,” and so to really appreciate an Austen story you have to be able to laugh, as she did, at the pettiness of her characters’ quarrels, the smallness of their scandals, and the needlessly roundabout curlicues of their romances while also being deeply and sincerely invested in their outcomes. But at least for now, the more you do for them, the less they do for themselves, and de Wilde is smart enough to trust her source material where it counts.