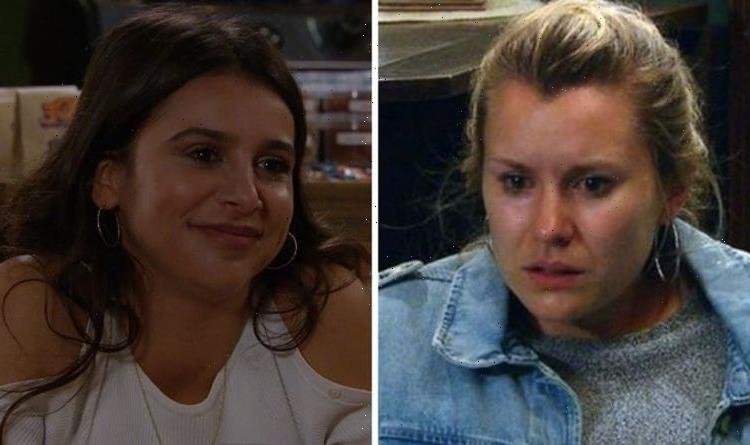 Emmerdale viewers will remember that last year, Dawn (played by Olivia Bromley) shot DI Mark Malone (Mark Womack) in self-defence after he tried to force her to overdose. In upcoming scenes of the ITV soap, Dawn will start struggling with what she has done, and Billy (Jay Kontzle) will try to help her see that Malone was the monster. But could a jealous Meena (Paige Sandhu), who wants to keep Billy away from his ex, overhear? If so, she’s not likely to keep quiet, and Dawn could end up being arrested.

Evil Meena has got away with a string of murders and has proved how jealous she can become.

It wouldn’t be out of character for her to be sneaking around watching Billy to see what he’s up to.

She might end up overhearing a conversation between Dawn and Billy.

In scenes to air next week, Billy comforts a distraught Dawn who is feeling guilty for killing Malone.

When Billy delivers an impassioned speech, Dawn leans in for a kiss, which Billy initially reciprocates before pulling away, leaving her humiliated.

The next day, Dawn is mortified over what happened and dodges Billy’s calls.

At Tall Trees, Billy tells Meena that he’s worried about Ellis Chapman (Aaron Anthony), but his mind is solely on Dawn.

Billy turns up at Woodbine, insisting Dawn hears what he’s got to say.

He explains that he wants to be with her, but wants assurance from her that she feels the same after their messy past.

If she says yes, a calculating Meena might reveal what she overheard and use it against her and Billy.

Unbeknownst to the pair, Meena could have recorded Billy’s long speech to Dawn about how she did the right thing.

Will Meena be able to blackmail the pair into getting what she wants?

After her recent spate of murders, viewers will know she is capable of anything.

Having wreaked havoc in the village many times before, it seems the nurse will now be targeting Dawn.

Never one to let go when her relationship is under threat, Meena might even turn Dawn into the police.

Will she end up being arrested for Malone’s murder?

His body is still buried in the village, so once Meena informs officers it won’t take them long to track down the evidence.

Probing into Billy’s relationship with Dawn in a recent episode, Meena asked if he wished they weren’t over.

“And there’s not a tiny part of you that thinks ‘what if’?” She asked.

Meena went on: “In that case, am I allowed to say she’s stupid?”

“See, you’re such a gentleman,” she responded.

With her sights firmly set on Billy, Meena will be devastated to see him and Dawn getting closer again.

Will Dawn end up in jail because of Meena?

Emmerdale continues on Friday at 7.30pm on ITV.