Australian Extinction Rebellion activists plan to ramp up high-profile disruptive protest actions even as the group’s British arm has announced it is toning down its tactics to draw broader support for mass protests later this year.

Extinction Rebellion activists from around the country are organising a series of actions to disrupt the Tour Down Under, the cycling race that serves as the first event for the elite world cycling tour calendar. 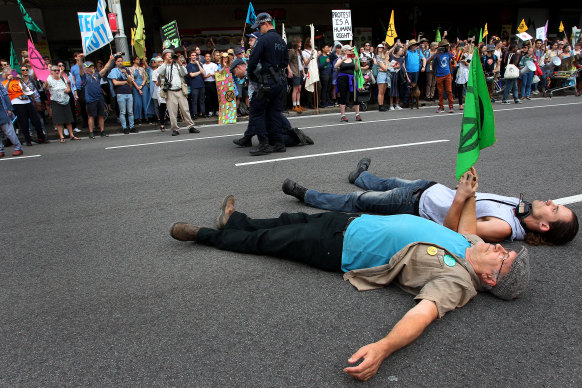 A man is arrested by police as activists lay in the road during an Extinction Rebellion protest in Sydney in 2019.Credit:Getty

The event’s main sponsor is Australian gas giant Santos, which has become a key target of climate protesters. Extinction Rebellion activists from across the country plan to target it with a series of protests at race starting points from this Friday through to its completion on January 22.

The group’s “action consensus” document says the protests will be disruptive but non-violent.

“We will be mindful of members of the public going about their normal day-to-day activities at all times,” the document says. “We wish we didn’t feel the need to disrupt, and at the same time we acknowledge that the political, economic and social system we live in has driven us to take disruptive action; recognising that unless actions are undertaken in towns, cities and public places any impact will be minimal and localised.

“We understand that workers who may be disrupted by our actions rely on their jobs to provide for themselves and their families.” 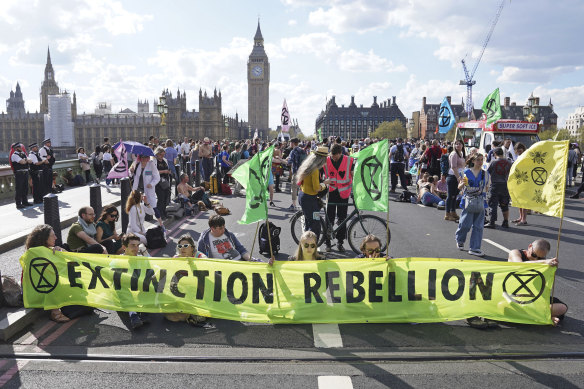 Extinction Rebellion in Britain has given up on roadblocks in a bid to garner widespread support.Credit:AP

The planned South Australian action comes after the group’s British arm declared it would tone down tactics in an effort to attract broader support for mass protests in April.

A statement entitled “We Quit” released on New Years Eve said, “XR is committed to including everyone in this work and leaving no one behind, because everyone has a role to play.”

“This year, we prioritise attendance over arrest and relationships over roadblocks, as we stand together and become impossible to ignore.”

Its co-founder Clare Farrell told The Sydney Morning Herald and The Age that the change was not an acknowledgement that its tactics had turned off potential supporters.

“What it is, is a call to arms for the ordinary citizens who are saying along with the media, ‘I like what they say, it [climate change] is really bad, but I don’t like what they do’,” she said. “So what we’re saying to them is, ‘This time, show up’.”

But one of the group’s leading figures in Australia, Jane Morton, said it had no intention of toning down its tactics in this country.

Morton, who was involved in the action in which two XR members glued their hands to a Picasso painting at the National Gallery of Victoria in October last year, said the climate movement needed a radical flank to work alongside its mainstream arm.

In the UK, she said, XR are temporarily positioning themselves closer to the mainstream climate movement. In Australia, XR itself remained on the radical fringe, while organisations like Schools Strike for Climate provided an avenue for more mainstream action.

Morton, who has just turned 70, went into semi-retirement in 2016 to focus on climate activism after 40 years as a clinical psychologist. That year she helped bring the XR movement to Australia.

Given climate models suggest the world may break through the Paris Agreement’s more ambitious target of 1.5 degrees of warming within the coming decade, and that so-called climate “tipping points” might be reached at between 1.5 degrees and 2 degrees of warming, radical protest action is now warranted, Morton said.

“I think we’re at the stage where people accept that global warming is real and it is a threat. But a lot of people, including journalists and a lot of politicians, don’t accept that it’s an emergency.”

She says a radical flank of activists risking arrest by disrupting traffic or gluing their hands to painting in galleries attracts massive media attention – and significant criticism – but attracted more support for the mainstream movement.

“The problem with climate is that if you look out the window, unless there is a fire or something, it just looks pretty normal.

“The only thing you can do that will give people an idea that it really is that serious is to do something that is really quite unusual – and be willing to, say, go to jail, because then it does get people thinking: ‘is it more serious than what we’re being taught?’ And it is.”

Scholars of social movements call this the “radical flank effect”.

Speaking off the record, members of more mainstream Australian environmental groups agreed with her, but were unwilling to associate their organisations with hers publicly.

Some prominent researchers believe the radical flank effect can be negative. Professor Michael Mann, one of the world’s leading climate scientists and advocates and director of the Penn Centre for Science, Sustainability and the Media said radical action can cost the movement support.

He is the co-author of a recent related study and has long argued against what he calls “doomism” – the danger of discouraging climate action by engendering a sense of futility.

“What we found wasn’t all that surprising,” he said. “Disruptive acts targeting commuters, or art lovers, is not the way to mobilise the public for a particular case.”

Writing on his study for Time magazine recently he said, “Youth protesters have their heart in the right place but the organisations behind these protests need to do right by them by being smart about the design of any public interventions. 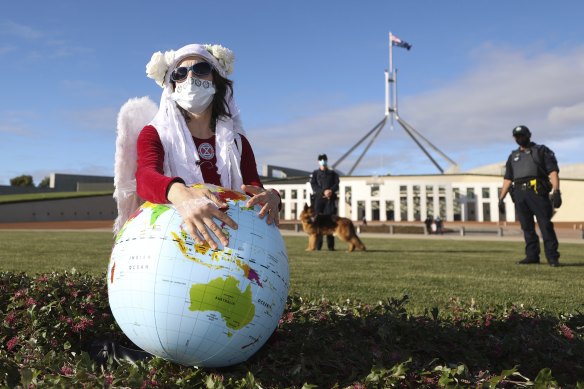 “That means, among other things, choosing sensible actions and appropriate targets. If we are to win the battle against polluters and their enablers, we will need public opinion on our side not theirs.”

Morton remains unmoved by Mann’s argument. She says the world is in crisis, and by softening the message scientists like Mann risk misleading the public about the scope of threat.

So concerned are some scientists about the lack of urgent action that many joined the so-called Scientists Rebellion last year.

One of them, Peter Kalmus, a NASA scientist who spoke out as a private citizen, said as he was being arrested in Los Angeles during a protest: “We’ve been trying to warn you guys for so many decades that we’re heading towards a f—ing catastrophe, and we’ve been ignored.

Get to the heart of what’s happening with climate change and the environment. Our fortnightly Environment newsletter brings you the news, the issues and the solutions. Sign up here.

Most Viewed in Environment