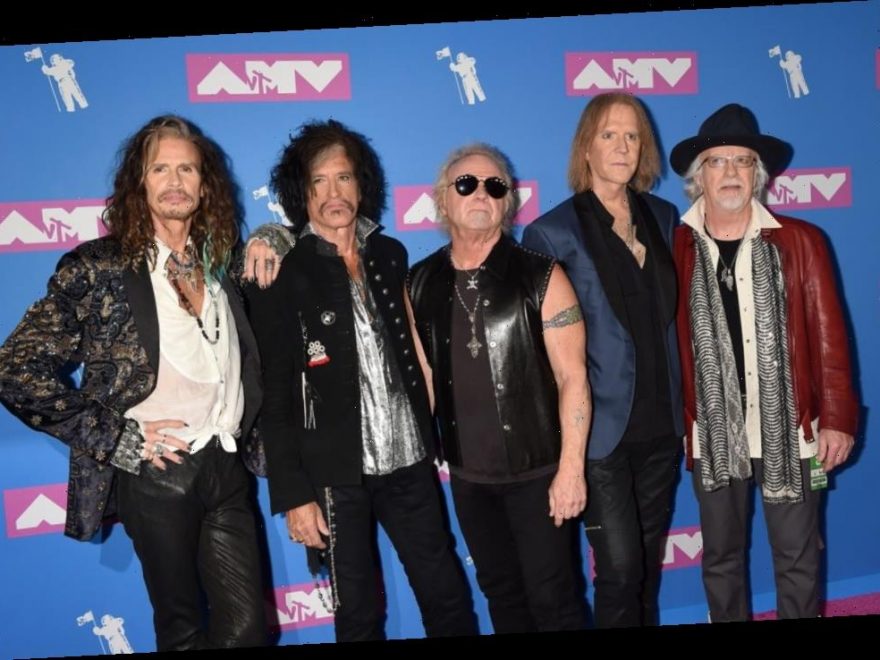 The 62nd annual Grammy Awards airs soon. One band will celebrate 50 years in music. Aerosmith is set to take the stage. They’ll reunite with ’80s legends, Run DMC. However, the performance won’t include the band’s original drummer, Joey Kramer. Amidst an ongoing legal battle that’s tearing the band apart, Kramer is prevented from joining them. Here’s what we know.

Ahead of their 50-year celebration, Aerosmith has been busy rehearsing for the 62nd annual Grammy Awards. They’ll reunite with Run DMC to play their ’80s collaboration, “Walk This Way.”

Over the span of their five-decade career, Aerosmith has received 14 total Grammy nominations and four wins. They made their Grammy stage debut in 1991 where they performed “Come Together.”

The 2020 MusiCares Person of the Year tribute will honor Aerosmith ahead of their performance. Unfortunately, ongoing legal drama subdues the glory.

Watch #Aerosmith the MusiCares Person of the Year, perform at the 2020 #GRAMMYs on Sunday Jan 26th on CBS! @musicares @recordingacademy @cbstv

In April 2019, drummer, Joey Kramer, suffered a shoulder injury that left him unable to perform. Kramer said he was fully healed by the fall of 2019 and “willing and able to return to Aerosmith” for the remainder of their Las Vegas residency shows.

Remaining band members asked Kramer to “prove he was able to play at an appropriate level” before they’d allow him back.

The longtime drummer obliged and auditioned by playing to a click-track. He described the process as “both insulting and upsetting.” Aerosmith unanimously decided Kramer is not fit to perform. They still invited him to the celebratory events of the Grammys weekend.

“Of course we have invited him to be with us for both the Grammys and our MusiCares honor,” the band said via statement. “We are bonded together by much more than our time on stage.”

Tension brewed for months amongst the band

#AEROHISTORY: It was no surprise! On this day, August 5, 1972, Aerosmith booked a show at Max's Kansas City in New York. Columbia Records President Clive Davis was invited to see the band play; Aerosmith was not originally scheduled to play that night at the club, but they paid from their own pockets to secure a place on the bill. Davis liked what he saw and Aerosmith signed to Columbia in mid-1972 for a reported $125,000 and issued their debut album, 'Aerosmith'.

A source told People that the “test” came after Kramer “failed to attend multiple planned rehearsals.”

“They had been inviting him to come back for the last six months since he’s been away for whatever medical situation he’s been dealing with,” the source said. “He said ‘Yes, I’ll come and rehearse’ and kept not showing up. On the eve of the Grammys and MusiCares, he wanted to be back.”

The source said they talked it out over the phone after hearing Kramer’s demo.

“They voted as a band, which they do with every decision, and it was four to one,” the source added.

In return, Kramer filed a lawsuit. In it, he claimed “being prohibited from playing with a band that I have given 50 years of my life to supporting, is beyond devastating.”

“I am being deprived of the opportunity to be recognized along with my peers for our collective lifetime contributions to the music industry. Neither the MusiCares’ Person of the Year Award nor the Grammys‘ Lifetime Achievement honors can ever be repeated.”

The suit said other band members “have suffered periods of injury and illness, including physical injury and treatment for addiction and substance abuse” and weren’t asked to audition before their return.

Kramer insists the lawsuit isn’t about money and only wants to perform with his band at the Grammys.

What did the other members of Aerosmith say?

The remaining members released a response via People.

“Joey Kramer is our brother; his wellbeing is of paramount importance to us. However, he has not been emotionally and physically able to perform with the band, by his own admission, for the last 6 months. We have missed him and have encouraged him to rejoin us to play many times but apparently he has not felt ready to do so.”

The statement added that letting Kramer perform now would be “a disservice to him, to ourselves and to our fans to have him play without adequate time to prepare and rehearse.”

#AeroHistory: November 5th, 2012 Aerosmith ROCKS an estimated 35,000 Boston fans with a free concert outside 1325 Commonwealth Ave, site of the bands original apartment where they lived from 1970-1972. The day began with the designation of 1325 Commonwealth Avenue as a historic landmark, with a special commemorative plaque placed outside on the building. This honor was bestowed on the band by Boston Mayor Tom Menino and the city of Boston. To top it off, AEROSMITH will further leave their mark as their handprints are being placed in the sidewalk in front of the building. The significance of the event was underlined by the attendance of the New England @patriots Owner Robert Kraft and President Jonathan Kraft, Patriots @tombrady and @jerod_mayo51, along with an array of Patriots cheerleaders who warmed up the crowd on a brisk fall day. Setlist: Walkin' the Dog Movin' Out Mama Kin Lover Alot Back in the Saddle Sweet Emotion Walk This Way Oh Yeah Train Kept A-Rollin'

And, because Kramer filed this lawsuit the weekend of the Grammys, he showed “total disregard for what is our limited window to prepare to perform these important events.”

A judge denied Kramer’s request on Wednesday, noting the shortage of time before the performance as the deciding factor.

“Given that Kramer has not played with the band in six months and the dearth of available rehearsal time before the upcoming performances, Kramer has not shown a realistic alternative course of action sufficient to protect the band’s business interests, the ruling stated.

“I can hold my head high knowing that I did the right thing – to fight for my right to celebrate the band’s success that I have dedicated the better part of my life to helping build,” Kramer added.

Fans support Kramer all the way

All over the world, fans have stood in solidarity with Kramer saying it’s not Aerosmith without him.

“I would’ve watched this because their still 1 of my Favorites! But after jilting & rejecting Joey Kramer from playing with them for this event I’ll have to pass. Loyalty & respect don’t seem to matter to the other mates. 50 yrs together & that’s how they treat him? Sad & sick!” a fan tweeted.

“I’m shocked & hurt to see Joey Kramer banned from playing with his band at this event & the Grammys. They should make an exception for him since they are being Honored. It speaks volumes about their Loyalty! 50 years – & “all he gets is a Gold Watch!” Shame on you Aerosmith!” another fan added.

And on and on the comments go on and on. Fans don’t hold back.

“@joeykramer said it best @IamStevenT – you are the twitch in his eye! Bring Joey back – 50 years as a band and the guys patiently wait on you every time you fight your demons – and this is the treatment he gets?!?” This fan echoed.

The point is, loyal fans of the iconic rock band aren’t thrilled with the way things are playing out and want to see Kramer on that stage with his bandmates.

The drama surrounding Aerosmith isn’t the only thing making headlines. Last week, the Recording Academy put chief executive, Deborah Dugan, on administrative leave. The events followed a “formal allegation of misconduct by a senior female member” of the organization.

According to the Washington Post, Dugan responded with a counter-complaint with the Equal Employment Opportunity Commission. She alleged “gender discrimination, sexual harassment and unequal pay on the part of the academy.”

During an appearance on Good Morning America, Dugan touched on the need for transparency regarding the Grammy’s voting system.

“There are incidents of conflict of interest that taint the results,” she said.

Between this and Aerosmith, that’s a lot to take in. Still, music’s “biggest night” is happening with or without any of the drama.