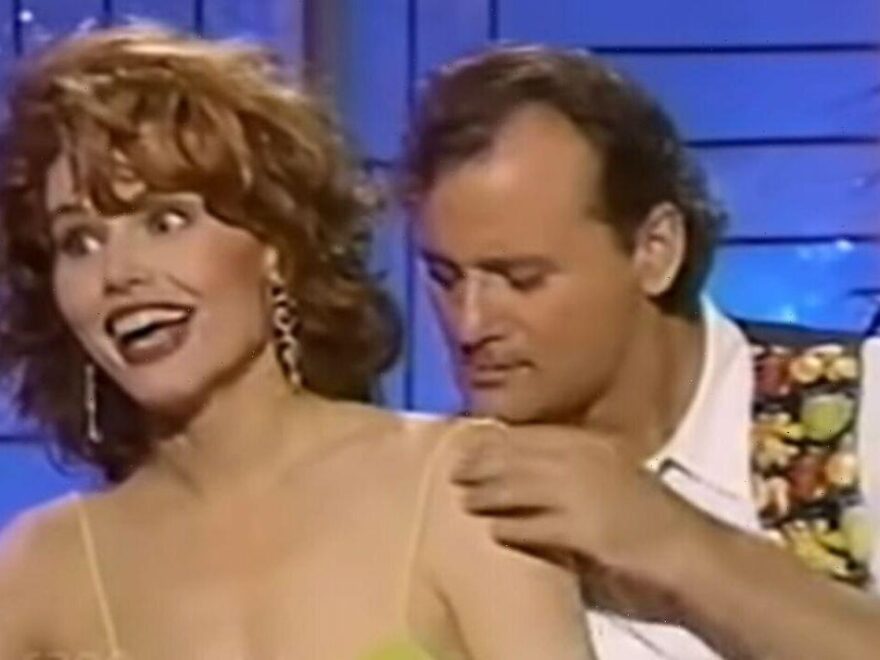 Geena Davis, 66, has accused Bill Murray for behaving “inappropriately” towards her, citing an incident when he attempted to pull down a strap on her dress during a late night TV interview. The horrified actress laughed it off at the time, seeing it as a “humorous anecdote”, but she admitted later that it was “devastating”.

Geena added that if she had called Bill out on his past behaviour, she felt she would probably not have received the film role she was after.

The Golden Globe winning American actress had reflected on the experience during an interview with i.

The reporter she was chatting to had seen TV footage from The Arsenio Hall Show in the USA, which she and Bill had appeared on to promote the 1990 comedy movie, Quick Change.

Though it might have been a comedy film, there was nothing funny for Geena about having her arm stroked and her dress strap pulled down in front of a TV audience.

READ NOW: Lewis Hamilton confesses ‘I feel so alone’ after reflecting on split

She winced to the reporter: “Oh, you saw?” before adding: “Isn’t it stunning? It’s awful.”

During the unearthed clip, she had admitted that auditioning for the role had been an equally tactile experience.

“He touched you a lot in the audition? Are you serious?” an incredulous Hall quizzed her.

The blushing actress shot back: “Yeah, I swear. The first thing he did was take my shirt out of my pants and start tickling my stomach.”

While she was speaking, co-star Bill was looking down at her body and stroking her arm before pulling her left strap down.

Without skipping a beat, she smilingly pulled it back up again, while the TV host asked: “Is this a story you wanna tell? Are you sure?”

“What we have is so strong,” Bill said, while nuzzling his face into her shoulder.

He added that he hadn’t known that she was right for the part straight away on the first audition.

“How was I to know? Baby, let me slide on you,” he continued, to peals of laughter from the audience.

“When I get there, he’s got this giant massage thing,” Geena elaborated, while her co-star clarified: “It’s called The Thumper.”

At that point, she elbowed her co-star in the ribs, exclaiming: “Excuse me!”, suggesting that the on-screen touching, which is not shown fully by the camera at that second, had become too intimate.

“I thought I was gonna be tough and there’s no way in hell I’m gonna let him touch me with this thing,” she continued.

“Cut to five minutes later and I’m lying on the couch with this thing on my back,” Geena explained.

Later, during a discussion about her acting skills, Bill told the audience: “Then we won the Oscar, so it looked legitimate having her in the movie,” to the sound of more laughter.

Reliving the experience to i years on, Geena explained that she had now forgotten it all.

“Telling it that way, just as a humorous anecdote, I must have thought, ‘Well, it’s ultimately funny, or makes a good story,’ when in fact it was so devastating,” she concluded.