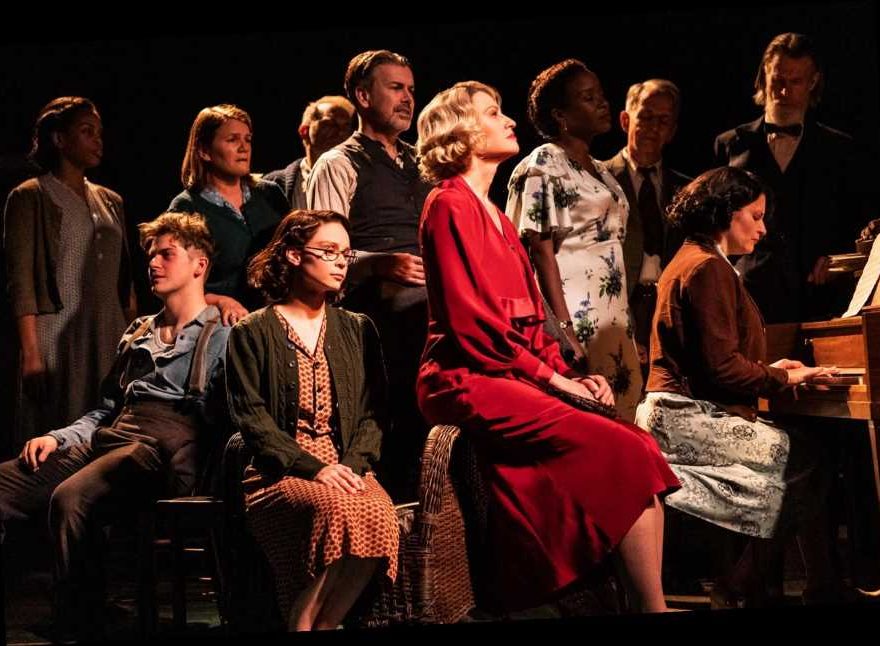 The jukebox musical — or “catalog musical,” as some on Broadway prefer to call it — has been running rampant for more than a decade now, leaving both triumphs and travesties in its wake. But even after we’ve seen the lives of Cher, the Temptations, Carole King, and the Four Seasons transformed into musicals — or the songs of Johnny Cash, the Go-Go’s, and Alanis Morissette used as scores for fictional stories — nothing quite prepares you for Girl From the North Country. Not the first, but certainly the best, musical featuring the songs of Bob Dylan: It’s as audacious, enlightening, and exasperating as the man himself.

Like many a major production, Girl from the North Country — which opened tonight at Broadway’s Belasco Theatre — took its time arriving on Broadway. It premiered in London in 2017 and ran for a short time off-Broadway at the Public Theater the following year, but the plot and the score (if not the cast) have remained essentially unchanged in those years.

Written and directed by Irish playwright Conor McPherson, Girl From the North Country replaces the formulaic bio narrative of most jukebox musicals with a bleak, Eugene O’Neill-inspired storyline centered around a boarding house in Duluth, Minnesota, in 1934.  Overseeing the business is Nick, now played by veteran character actor Jay O. Sanders (Dennis Quaid’s post-apocalyptic rescue-buddy in The Day After Tomorrow, for instance). Mare Winningham, reprising her role from the earlier New York production, is Nick’s wife, Elizabeth, who suffers from dementia but has moments of clarity and flirts with some of the boarders in their home.

'Once Were Brothers' Review: Robbie Robertson Looks Back in Anger, Joy, Sentimentality

Over the course of the show, that house gradually fills up with new and old renters, as well as eccentric locals, and we soon learn that everyone has a secret — whether it’s an illicit affair, earlier jail time, or a pregnancy by way of an unknown father. As each of the roughly dozen characters scurries onto and off the stage, they break into one of Dylan’s songs, which comment on the mood or their backstory: A boxer who stays in the house (played with bruised nobility by Austin Scott) sings “Hurricane,” naturally, and Winningham sings “Like a Rolling Stone” as if it were an homage to all the random guests who find themselves in the boarding house.

As you can probably tell from that description, Girl From the North Country is hardly your standard jukebox musical, starting with the idea of the jukebox itself. As McPherson told Rolling Stone in 2017, he only owned about five Dylan albums when he was approached by the Dylan camp and their associates with the idea of writing a show using his songs. McPherson was sent Dylan’s complete catalog, which he loaded onto his iPod; whenever he was out and about, he’d bring it along, hit shuffle-play, and revel in whatever song came up — be it a beloved classic or an obscurity.

Thanks to that unconventional approach, Girl From the North Country doesn’t feature its songwriter’s most-loved songs. “Like a Rolling Stone,” “Forever Young,” and “All Along the Watchtower” are here. But don’t expect to encounter “Blowin’ in the Wind,” “Knockin’ on Heaven’s Door,” or “The Times They Are A-Changin’.” Be prepared to hear deep cuts from New Morning, Street-Legal, Infidels, and even the born-again Saved.

As baffling as that sounds on paper (Saved?), many of the choices actually work by shedding light on songs that deserve a second chance. As Mrs. Burke, who copes with a special-needs child, Luba Mason sings (and drums on) a sturdy, gender-flipped version of “Sweetheart like You,” and the show rescues and makes you reassess “Tight Connection to My Heart (Has Anyone Seen My Love?),” from the misbegotten Empire Burlesque. Not one but three songs from Street-Legal — “True Love Tends to Forget,” “Is Your Love in Vain,” and “Señor (Tales of Yankee Power)” — are surprising highlights, their melodies enhanced in ways they weren’t always on that album. Scott turns “Slow Train” into something close to gospel.

During that and other performances, some of the cast gather together to sing harmonies. Combined with a small folk ensemble at the back of the stage — wrapping the songs in keyboard, violin, and guitar — the results are neither Broadway belting nor Dylan imitations, but something often beautiful and beguiling in-between. The most touching of those performances — such as Nick’s alcoholic writer-wanna-be son Gene, played by Colton Ryan, essaying a mournful, elegiac “I Want You” with Caitlin Houlahan’s Kate — embellish subplots that explore regret, bad life choices, wrongheaded decisions, and wayward lives. (“Duquesne Whistle,” on the other hand, nearly becomes a novelty song.)

Girl From the North Country is far from the debacle of Twyla Tharp’s The Times They Are A-Changin,’ which seemed to imagine a Cirque du Soleil in which everyone was a stoned circus clown. But its book, and the people who inhabit it, are problematic. Some of the characters are stern and serious, while others are near-parodies of eccentric Midwesterners. The clashing characters nearly cancel one another out, and every so often a line emerges that seems more appropriate for a sitcom than a contemplative drama. When Nick is asked if his mother is dead, he says, “I hope so — I buried her 15 years ago,” you almost expect to hear the joke accentuated by a cymbal crash (except the band does not employ a drummer).

To its credit, Girl From the North Country doesn’t offer up a false, crowd-pleasing closer; it’s as sober as the historical moment it depicts. (It’s like Mamma Mia! on downers.) By the end of the show, the random encounters have left some characters broken and others uplifted; one of them dies. But like a Dylan show with strangely rearranged songs and a baffling set list, it leaves you both humming its songs and puzzling over what you just witnessed.