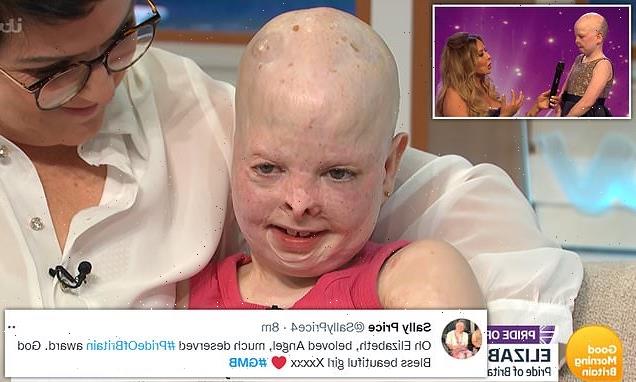 GMB viewers praise ‘angel’ Pride of Britain Child of Courage award winner, 8, who says she ‘ignores’ people who treat her differently because of the third degree burns she suffered as a baby

Viewers were touched by the moving story of Elizabeth Soffe, eight, who won the  Pride of Britain Child of Courage award last night, and had empowering words for the star-studded audience.

Elizabeth, eight, suffered life-changing third degree burns when she was six-months-old after her cot caught fire due to a faulty AC unit in the villa where her family was staying in Doha, Qatar.

The injuries left her fighting for her life, with parents Sinead and Liam being told she might not make it, Good Morning Britain’s Richard Madeley and Kate Garraway heard today.

But eight years on, Elizabeth raised £200,000 for Birmingham Children’s Hospital’s specialist Burns Centre, and was awarded the Pride of Britain honour for her dedication.

GMB viewers called the inspiring eight-year-old an ‘angel’ after her story was revealed on the show. 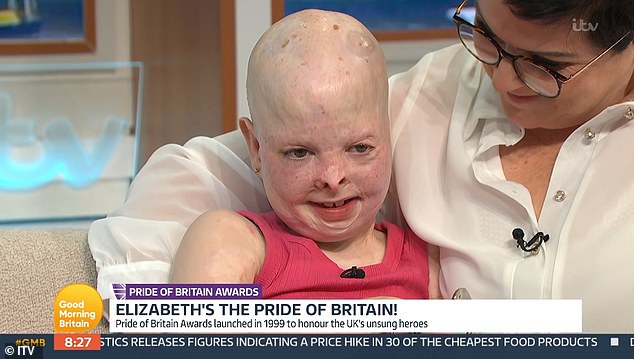 Elizabeth Soffe, eight, suffered life changing third degree burns when she was six-months after her cot sparked fire due to a faulty AC unit in the villa where her family was staying in Qatar. She has now raised £200,000 for Birmingham Children’s Hospital’s specialist Burns Centre and won the Pride of Britain Child of Courage award

As she received her award last night, the eight-year-old wowed the audience with her words of wisdom, saying she wanted people who are different to know that: ‘people who are mean to them, they don’t understand that you are better on the inside than them.’

Accompanying her on her TV appearance, Liam and Sinead revealed how Elizabeth was left fighting for her life as an infant.

‘We lived in Qatar in the Middle east, one morning, Elizabeth was six months old, Sinead put her down in her cot and left her,’ Liam recounted.

‘About 30 seconds later, she heard her crying, so she went back into the room. Everything was on fire, the cot was on dire, Elizabeth was on fire, 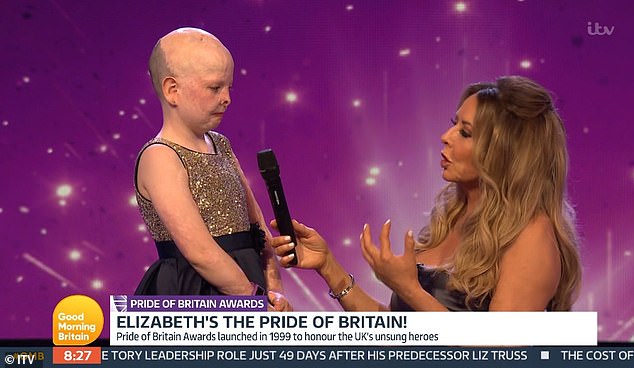 As she received her award last night, the eight-year-old wowed the audience with her words of wisdom

‘So she grabbed her out, put out the flames, took her downstairs and rang an ambulance,’ he went on.

Sinead revealed the life changing incident occurred because of a faulty air conditioning unit that was placed above the child’s cot.

‘It sparked onto her cot and the whole cot went up [in flames] in the blink of an eye, life changed,’ she recounted.

The couple, who are originally from Dublin but had lived in Doha for three years prior to the incident, moved to the UK so that Elizabeth could receive specialist treatment for her burns. 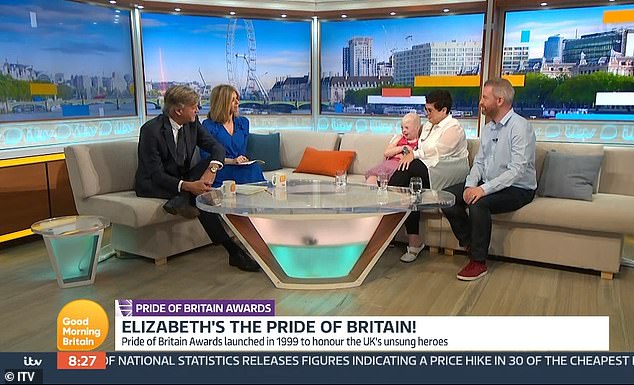 The fundraiser’s parents, Sinead and Liam, left, said it was actually their idea to help Birmingham hospital fund a machine that could help burn victims 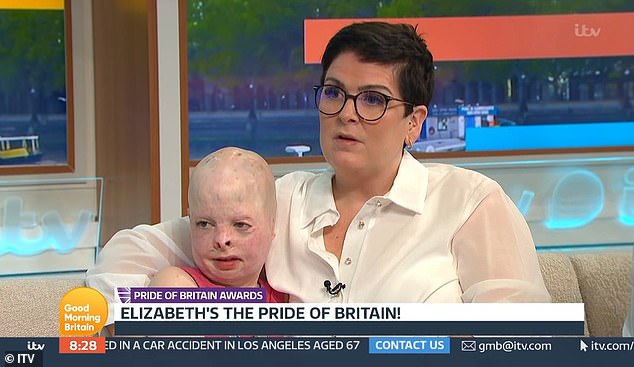 Liam and Sinead – who lost everything in the blaze – set up a charity to raise £100,000 to care for her and their other three children at the time.

Tongue-tied Elizabeth did not say much during her Good Morning Britain interview, however, Kate Garraway told her: ‘you stood on stage last night and you won everybody over with your smile and your absolute approach.’

Elizabeth admitted the idea to fundraise was not hers, but Liam explained her parents wanted to fundraise for something she could understand. 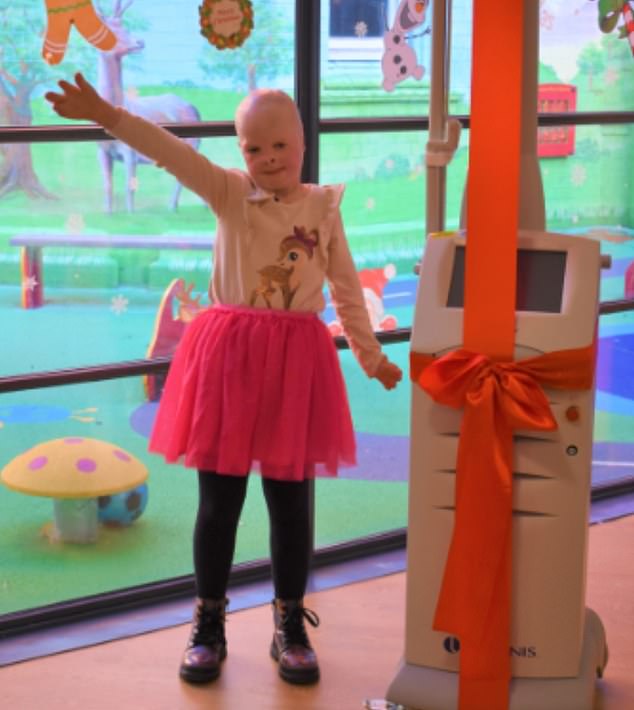 ‘It fires little lasers onto scar tissue that ca be quite raised, and it breaks it up so that your able to move better with the scars.

‘They couldn’t get funding for it, we wanted to raise money for something big and something Elizabeth could understand, so this was the thing.

So she started this running one mile a day for 26 days to make a marathon, every day she went out and ran a mile and dragged us with her,’ he explained.

When asked whether she was really into running, Elizabeth candidly revealed: ‘not as much as I used to. 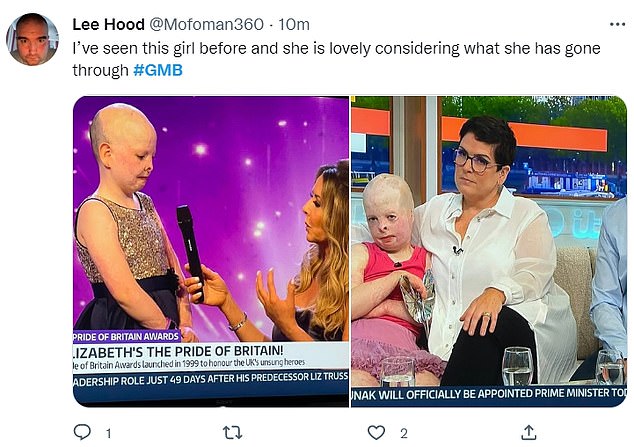 Thanks to her efforts, the eight-year-old was able to raise £200,000 for the hospital, who was able to buy the much-needed machine.

But Elizabeth revealed her interests lie elsewhere, as the thrill-seeking child said she loved karting and racing.

She admitted she loved F1 driver Daniel Ricciardo, whom she’s met, because he was ‘happy.’

Liam added that in spite of her soft-spoken nature, Elizabeth wanted to become a F1 driver herself, with the eight-year-old revealing she likes racing because it’s ‘dangerous.’

Elizabeth’s family admitted that she has had to adapt to the challenge of people reacting to her scars, especially at school.

‘I just ignore them, and I walk away from them,’ Elizabeth said.

Viewers were deeply inspired by Elizabeth’s composure and her life story.

‘I’ve seen this girl before and she is lovely considering what she has gone through,’ a viewer said.

‘I’m not sure people realise that a burn victim isn’t just injured, recovered and that’s it, they often have to have lifelong treatments and surgeries to prevent the skin becoming rigid and immobile,’ another person stressed.