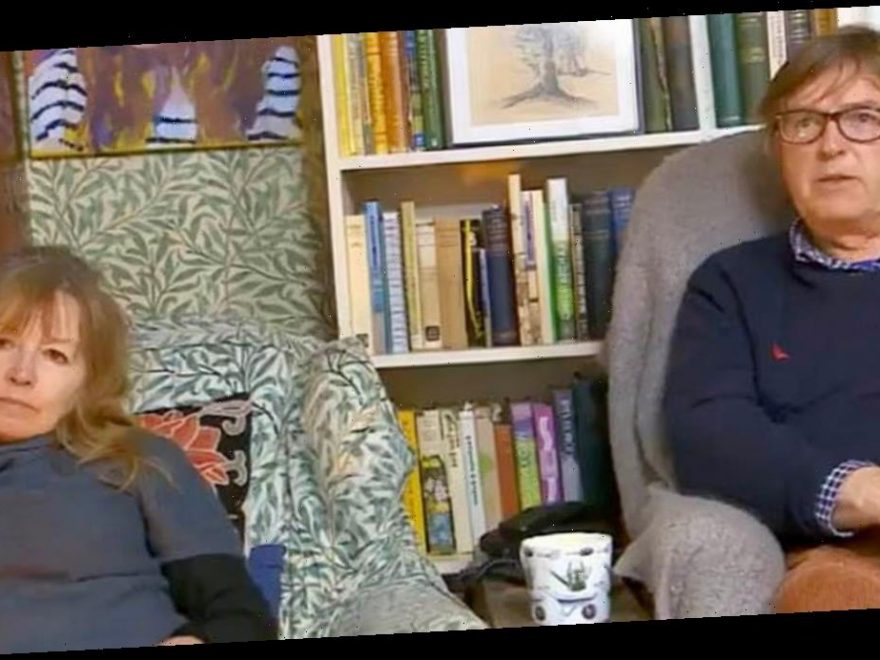 Acclaimed artist Giles and journalist and author Mary, are beloved by many for their hilarious moments on the television show.

They're one of the longest-standing members of the Gogglebox family, with their dry sense of humour and quick-wit making them firm favourites of many viewers.

Giles was determined to get his wife Mary to "punch the air".

She replied: "I don't punch the air. It's not in my nature."

The agony aunt punched her fist in the air, but Giles told her she was doing it wrong, saying: "No, no, not up, it's a…" before he gestured doing a boyband style air grab.

Mary did it while pulling a hilarious face, much to the joy of her husband, who yelled: "That's fantastic, Mary! Do the face as well.

Mary quickly replied with the hysterical one-liner: "I'll punch something else if you're not careful."

In this television moment, Giles and Mary watched the celebrity reality show The Jump.

Giles talked about how genius the premise of the show was, saying jokingly: "It's a way of exterminating minor minor celebrities.

3. Giles talks about his hairdressers

The couple were talking about shops with clever names.

Giles said: "There's The Codfather at one end of the village.

"Yeah, and then it had The Codfather two at the other end of the village."

As the camera zoomed in on Giles' face, he blurted out: "And my hairdressers called Curl Up and Dye."

In this short but hilarious clip, Giles without warning decides to begin howling.

Much to the annoyance of Mary, he continues to make the wailing noise.

Mary eventually snaps, calling Giles by their nickname for each other: "Oh stop it, Nutty."

The couple were catching up with Celebrity Island with Bear Grylls.

Made In Chelsea star Ollie Lock was struggling on the programme, which prompted Giles to poke fun at the reality star.

He said: "Poor Ollie. Miles away from a Pret a Manger."

After being on the popular Channel four show for five years, it's clear Giles and Mary know how to entertain fans of the show.