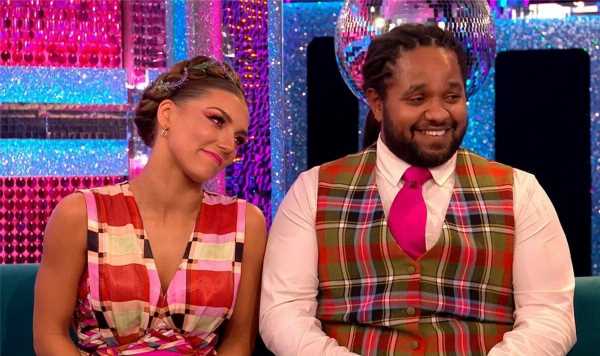 Strictly: Hamza tells Jowita ‘we did it’

Before Hamza Yassin dazzled millions in the Strictly Come Dancing ballroom, he was known for CBeebies’ Let’s Go for a Walk, Countryfile and Animal Park. When the wildlife cameraman was confirmed as a Strictly contestant, some were unsure who he was. But now he has become the hot favourite to take home the Glitterball Trophy.

As well as gaining the support of the British public he also has his co-stars backing, including Animal Park presenter Ben Fogle.

In an exclusive interview with Express.co.uk, Ben said: “I remember reading a lot of the comments beforehand like, ‘Who’s Hamza? I’ve never heard of Hamza before’.

“But for me, he is the perfect contestant for Strictly because it’s someone that, if you watch Countryfile or Animal Park, of course you will know exactly who he is, but I also love the fact that has been introduced to a whole new audience who I hope will be charmed by him.

“He is a very good man. He is the kind of celebrity role model that I would like my children to kind of aspire to.”

He added that he has been watching the show with his family and supporting both of them.

The presenter continued: “I think it’s the first year I’ve had two people that I know very well and I think they are both doing brilliantly.

“I expected Helen to do very well but Hamza has really surprised me.

“I have to say I was not expecting him to pull that out of the bag and I’m very glad that I’m nowhere near that dance floor because he would wipe it clean compared to my dancing, that is for sure!

“Who would have known that a natural history cameraman had such moves hidden within! But that is the beauty of the show, I think it really surprises people and brings a smile to everyone’s faces.”

As for whether he would take on the Strictly ballroom himself, Ben confirmed that is unlikely.

He said: “Some people take themselves too seriously, and by the way, that’s not the reason why I won’t do Strictly.

The Strictly Come Dancing 2022 final will take place this Saturday and Hamza and Helen will join Fleur East and Molly Rainford to compete for the coveted trophy.

As it stands, Hamza and his professional partner Jowita Przystal are the bookmakers favourite to win with odds of 1/2.

Helen and her partner Gorka Marquez are Hamza’s stiffest competition with odds of 7/4, according to Ladbrokes.

Molly Rainford is tipped at 40/1 to come through four dance-offs as the series winner.

While Fleur East is a little further behind at 66/1 to come back from last week’s bottom two as the winner.

Strictly Come Dancing airs Saturday at 7.05pm on BBC One.