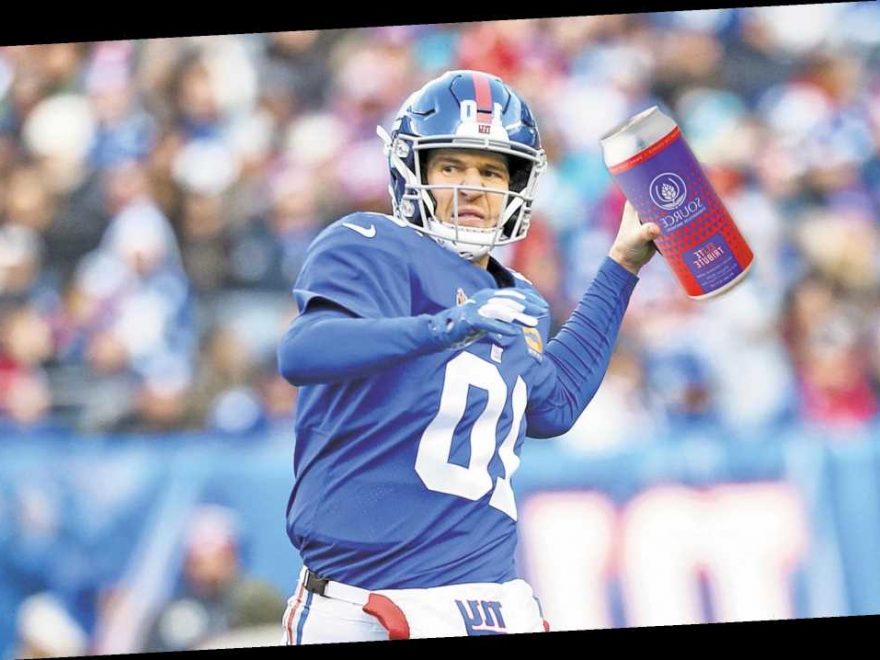 About a month ago, Philip Petracca decided to honor his favorite New York Giant, Eli Manning, by brewing a beer in his honor.

The timing — like Manning’s gutsy 2012 pass to Mario Manningham in Super Bowl XLVI — was impeccable.

“We put it up for pre-sale, and a few days later, he announced his retirement,” Petracca, who owns Source Farmhouse Brewery in Colts Neck, NJ, tells The Post. “It was dumb luck.”

Called ELIte Tribute, the craft beer was intended to honor the athlete’s accomplishments on and off the field ahead of Super Bowl Sunday.

“He’s a great role model, and I’ve learned a lot about leadership from him,” says Petracca.

The IPA is made with citron-mosaic hops and described by Petracca as “juicy” and an “easy-drinking beer.” A four-pack retails for $18 — or it did, before it sold out almost immediately online.

The brew is a fitting homage to Manning — a noted imbiber of the sudsy stuff. In December, former teammate Lawrence Tynes told ESPN that Manning had a beer guy in “every f - - king stadium” tasked with handing him post-game pops for the team bus.

Although it’s not known what variety or brand the signal-caller prefers, Petracca thinks No. 10 would approve of this brew — especially since it’s a hoppy diss to Patriots quarterback Tom Brady, who Manning defeated twice to earn two Lombardi Trophies and his Super Bowl MVP nods.

“It’s a New England-style IPA, because we wanted to throw some shade at them,” he says.

ELIte Tribute debuted last weekend at the Asbury Park Beerfest, where Source — which opened in August in a renovated 19th-century dairy farm — captured the award for best brewery in New Jersey.

“ELIte Tribute lived up to the considerable hype. This 8-percent ABV [alcohol by volume] imperial NEIPA [New England India Pale Ale] had soft and subtle berry notes and a pleasant complexity. Here’s hoping it makes a comeback at some point,” wrote the Asbury Park Press.

True to Manning’s unselfish style, he is fond of sharing beers with his teammates after the game. So in that spirit, we passed a can or two around the New York Post newsroom.

As a devoted Giants fan, I’ve always been naturally drunk on the youngest Manning. This brew smelled like an orange grove and was just as enjoyable — especially at 1 p.m. on a Wednesday.

“It’s a good citrusy IPA. I would be happy if I ordered this in a bar,” says senior features writer Michael Kaplan.

Associate features editor Lauren Steussy, who makes her own beer, gives it rave reviews. “It’s juicy, fruity and fresh. I liked it better than Lagunitas.”

“It’s not as reliable as Eli,” he quips.

Locals can try ELIte on tap at the brewery this weekend. On Sunday at 10 a.m., Petracca will sell a limited number of four-packs on site.

Despite the high demand for the drink — “We’ve literally had hundreds of people calling,” says Petracca — the brewer isn’t planning a second batch anytime soon … unless a certain someone asks him to.

“I would consider it if Eli comes to brew it with us,” he says. “We can donate the proceeds to the charity of his choice.”