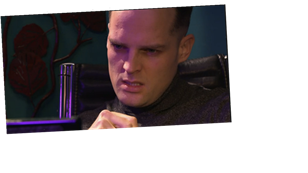 Hollyoaks fans are convinced that the soap will air another death in the near future.

Liam is convinced that Maxine is responsible for his younger brother's death and is hellbent on getting his own back on the single mother.

In tonight's first look episode on E4, Liam broke into Maxine's flat as part of his revenge plan. Liam had a change of heart when he released how much Maxine is struggling for money and offers her a loan and thinks of a way he can use her to his advantage.

Liam was left furious and later added a picture of James to a dartboard in his office, that he has also put a snap of Maxine on during last night's episode.

Fans of the Channel 4 soap already know that Liam previously pinned a picture of Mercedes McQueen onto the famous fart board.

Viewers rushed to their keyboards to predict that it could be the end of three of Hollyoaks villagers on Liam's hit list.

Another added: "Is Liam turning into another Breda he’s got victims now ?? I hope not ugh."

A third guessed:"Mercedes, Maxine and James to die? Liam's dart board says so."