I’m always wary when TV producers, directors, and showrunners say they’re committing to progressive casting, because very, very rarely do their intentions play out. Maybe it’s because most showrunners think diversity just means more people of color on screen. Or that they can simply cast Black actors and then never address their race within the context of the show. That seems to be what the showrunners for House of the Dragon, Ryan Condal and Miguel Sapochnik, thought. And watching the first season, I could only sit and think about why that was a big mistake.

I didn’t have high expectations for diversity when watching HotD; I mean, it’s a TV show about dragons, and Black characters historically haven’t appeared outside slave or servant roles (Grey Worm and Missandei from the original Game of Thrones come to mind). So when Steve Toussaint was cast as Corlys Velaryon (aka the Sea Snake), I felt slightly apathetic. Game of Thrones had already fumbled its two Black characters, so I believed the prequel would do the same.

And not that I like being right (okay, sometimes I do), but Condal and Sapochnik did exactly what I predicted: Use color-conscious casting—the practice of casting people of color in traditionally white roles—as a diversity checkmark while keeping the show environment colorblind, which means that in the context of the show’s world, race doesn’t matter. 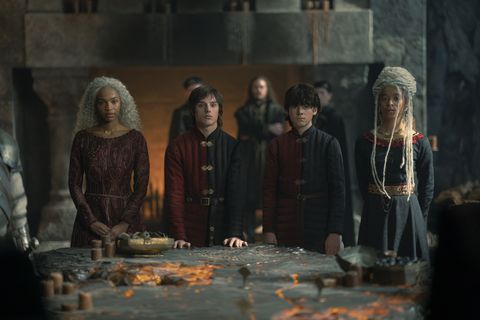 Nowhere in the first season does HotD mention the Blackness of its few Black characters. All we’re told is that House Velaryon has blood from Old Valyria, which means they’re really close to the Targaryens and often marry each other to keep the bloodline “pure.” Nothing wrong with that, but since the Velaryons are Black, shouldn’t all Velaryons have afrocentric features? The casting department didn’t think so, apparently.

One of the main storylines in the first season is the denial that Rhaenyra Targaryen’s children are bastards even though they have white skin and loose curly black hair while their “father” is Laenor Velaryon, a white-haired Black man with dreads. The book Fire & Blood (which the show is adapted from) also follows this plot point. But the Velaryons aren’t Black in the book, meaning it’s somewhat believable or at the very least plausible that Rhaenyra’s children are Leanor’s. I know this is a fantasy show, but there’s something really cringe about (1) trying to pass three obviously white children off as Black, and (2) making the one Black family on the show the center of a *checks notes* paternity scandal. Even if House of the Dragon were only following the book’s plot point—the question of the legitimacy of Rhaenyra’s children—the decision to cast House Velaryon and thus Laenor as Black means that race and racial connotations needed to be introduced as well. You shouldn’t cast a white character as a person of color and then ignore their racial identity.

I’m not saying the showrunners did a disservice to fans of color by trying to diversify. But they did checkmark casting by beginning and ending that effort with casting Toussaint as the Sea Snake. If the showrunners took real time to consider how color-conscious casting could alter the show, maybe Black viewers like myself wouldn’t be disappointed that the only Black family in the series has mostly not survived.

There’s a scene in episode four where Laenor, Leana (the Sea Snake’s daughter), Corlys, and his wife Rhaenys are walking down a flight of stairs into a wedding scene. That three-second clip SCREAMED Black excellence. Watching it gave me the tiniest hope that maybe the showrunners had it together. But three episodes later, the majority of the Black characters had been killed, with only two Black Velaryons still on our screens: Baela and Rhaena, Corlys and Rhaenys’s two granddaughters. 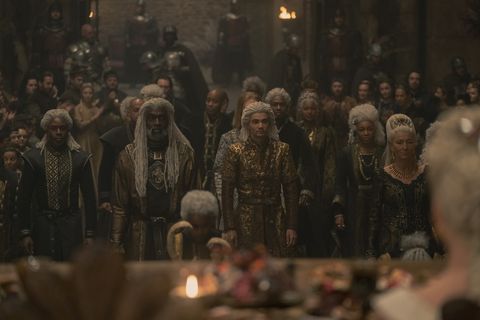 And I get why the characters were killed off—Laena and Laenor don’t survive in the books, so why would they live on in the show? But the showrunners could have shown the Black Velaryons for more than ten-ish scenes while also sticking to the source material. Instead of rushing to the main conflict of the Targaryen civil war, we could have seen the development of Laena and Daemon Targaryen’s relationship or Rhaenyra and Laenor’s struggles at King’s Landing.

I’m just saying the show had options, k? They chose to cast House Velaryon as Black, knowing Black fans like myself were excited to see Black fantasy representation on-screen, only for said representation to be sidelined in a span of three episodes. Like, damn. Can Black folks have anything?

Maybe the showrunners will do better with their “diverse” representation in the upcoming seasons. Probably not. If there’s one thing we’ve learned, it’s that fantasy series can have dragons, White Walkers, and dreamers who can see the future. But Black folks? That’s where they draw the line, apparently.