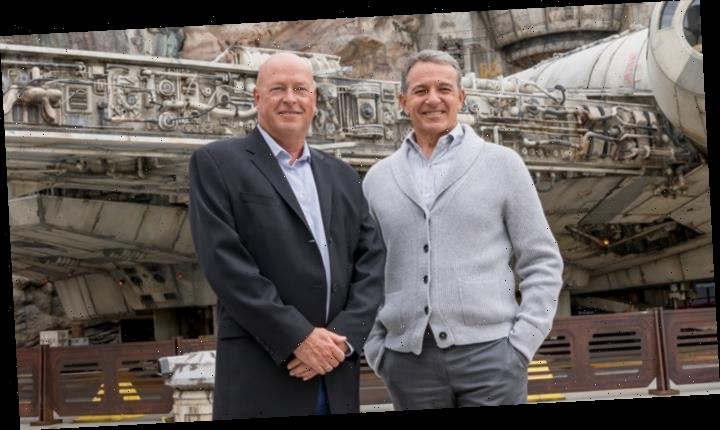 When the final act came in the corporate succession drama that has captivated Hollywood for years, it turned out that Bob Chapek was the logical candidate who was hiding in plain sight the whole time.

The news that Chapek would succeed Bob Iger as CEO of the Walt Disney Co. hit the entertainment industry like an asteroid when it surfaced on the afternoon of Feb. 25.

Over the past few weeks, Iger has never seemed more in command of the colossus that he has expanded so masterfully during his 15 years at the top. The launch of Disney Plus, the film studio’s astounding track record at the box office and the deeper integration of 21st Century Fox assets into Disney’s TV businesses (think “FX on Hulu” and other game-changers) made Iger seem more invincible than ever. He even helpfully tallied up the highs and some lows of his tenure in the best-selling memoir released last fall, “The Ride of a Lifetime: Lessons Learned From 15 Years as CEO of the Walt Disney Company.”

But Iger has also been emphatic that after three previous contract extensions — the last coming in 2017 on the heels of the initial Disney-Fox sale agreement — he would really and truly step down as CEO at the end of 2021. That set the clock ticking for the Disney board to settle on a successor, a decision that has become more momentous with every triumph scored by Iger’s regime.

Chapek has long been seen as a contender for the job, but he was always viewed as having higher-profile competition, most recently in Kevin Mayer, Disney’s chairman of direct-to-consumer and international, and Peter Rice, one of the new Fox recruits who now oversees all TV operations (other than ESPN) as Walt Disney Television chairman.

But Chapek’s résumé had something the others lacked. He’s had a tour of the company’s operations over his 23-year tenure, from heading consumer products to leading film distribution and home entertainment to running the theme parks division for the past five years. He knows the company inside and out, and internally he is respected and well liked. For the extremely difficult task of filling Iger’s shoes at an enterprise as mammoth as Disney, those qualities are essential.

Chapek’s biggest challenge will be grappling with the myriad creative issues that arise for Disney, particularly on large-scale projects. He has no hands-on creative experience, unlike Iger, who came to the job after years of experience with entertainment and sports programming from his earlier tenure at ABC. Chapek’s ability to schmooze with talent and court top filmmakers will be tested at a time when there’s no shortage of studios chasing A-listers.

In the words of a senior Disney executive, Chapek is a “consummate operator” and a loyalist through and through. Sources say he has demonstrated over and over that he runs his businesses “with a company agenda, not a political agenda,” which has made for easy collaborations. He’s also described as extremely down-to-earth and approachable. “He’s personable but not a big personality,” says a Disney veteran.

Rich Ross, the Disney alum who tapped Chapek to take over film distribution and home entertainment during his 2009-12 tenure as head of Walt Disney Studios, says the new CEO has deep knowledge of all aspects of the company.

“Bob Chapek was both an innovative and insightful leader who was always looking for opportunities to play to our strengths,” says Ross. “He could find opportunities for innovation and then lead the team to achieve the end goals.”

Chapek impressed Disney managers and his peers during his earlier tenure as head of consumer products. Ross notes that Chapek took over home entertainment at a time when release windows were under scrutiny and digital distribution of content was starting to become a meaningful business. Chapek was also deeply involved during this time with decisions on how to market Disney and ABC TV titles in the ancillary windows.

Ross recalls that Chapek made a point of assembling a strong team of lieutenants who made him more effective in juggling the various aspects of his job. “He may be perceived as no-nonsense, but he was incredibly supported by the people who worked for him,” Ross says. “He’s really one of the good guys.”

Chapek’s work in consumer products also has given him vital exposure to a range of Disney divisions, and a strong sense of the value of the Disney brand in a retail setting. That experience set him up well to assume command of the parks division, perhaps the ultimate expression of Disney’s gold-plated consumer brand.

The biggest challenge he faces as he takes the CEO reins will be the inevitable comparisons to his highly effective predecessor. The succession plan unveiled Feb. 25 calls for Iger to shift to an executive chairman role overseeing the company’s creative operations.

Chapek immediately begins a 20-month sorcerer’s apprenticeship period with Iger that seems to be designed at least in part to allow him to begin exerting the authority of a CEO while Iger is still in the picture. That’s intended to keep investors calm about the transition. It will also allow for a gradual evolution of leadership internally, where there will surely be equal amounts of agita about the CEO shuffle, no matter how highly Chapek’s peers regard him. Undoubtedly that process will be smoother with Iger guiding the hand of a 27-year Disney veteran than it would be with a newcomer to the house that Mickey Mouse built.

Iger, as many analysts have noted, is the unicorn CEO who is as comfortable with business and financial decisions as he is with greenlighting a $200 million superhero movie or leading the charge in bringing innovative motion-capture technology to the screen. If there’s ever a Mount Rushmore for CEOs, his face will be on it.

Chapek has so far proved that he has the experience and the temperament to serve as an effective leader of more than one crucial Disney business unit. Whether he has the vision and the drive to be a worthy replacement for Iger will surely be Hollywood’s new obsession, now that the curtain has come down on Season 1 of Disney’s real-life succession drama.