From the moment that Jennifer Walters (Tatiana Maslany) publicly transforms into She-Hulk, she has to deal with trolls.

Marvel’s “She-Hulk: Attorney At Law” immediately and irreverently leans in to social media and toxic masculinity, to the obsession with women’s bodies and existence that seems to relentlessly haunt men online.

“When the show first came out, I was getting these really awful, mean, troll messages,” recalls series director Kat Coiro in a post-finale Zoom interview with IndieWire. “Just terrible things, ‘You should die’ and awful words — and as the series has progressed, that has started to go away, because we address the trolls. The trolls are the villains. I think these people realize that when they are doing [that], they’re playing right into our hands.”

“We always knew we were going to come under attack because that’s what happens to women in this world and this ethos,” she added. “So it’s been fun to kind of go, ‘Yeah, we knew you were gonna say mean things to us, and we put you in the story.’”

There was also the initial debut of She-Hulk herself: Maslany with CGI green skin and wavy hair, portrayed by 6’5” body double Malia Nahinu. Early responses to the trailer and series had a lot to say about She-Hulk’s look, but those sentiments have faded during the series’ nine-episode run.

“There’s a shock to her,” Coiro said. “We have never seen a VFX character that looks like this, so people had to take a little time to digest her. Now that they have, I’m so happy that we’re just talking about the elements of the show and not her body, because that’s kind of the whole point.”

“As negative as it can be, it is connection,” Coiro added of the negative feedback. “It is people feeling passionately about something, and if we can take that and turn it positive and go, ‘Oh, this really is fun,’ then I feel like we’ve done a great job.”

Steering a conversation that way — and steering online trolls away from harassment — is no easy task, nor is it one that the “She-Hulk” team set out to explicitly accomplish. But it comes with the territory of having a female superhero (still a rarity in Marvel), that is also associated by name with an established male hero. When Jen talks about managing her anger and being taken seriously, these aren’t new problems caused by being a Hulk, but everyday realities she already faces.

“I always wanted to make sure they were undertones,” Coiro said. “I’m not making a show that has feminist messaging directly, but it’s a part of the story and it’s part of the story because she’s a woman navigating the world… It’s not so much that that’s the main point of the show, but because the show is told by a lot of women, we all brought our individual stories to the table.” 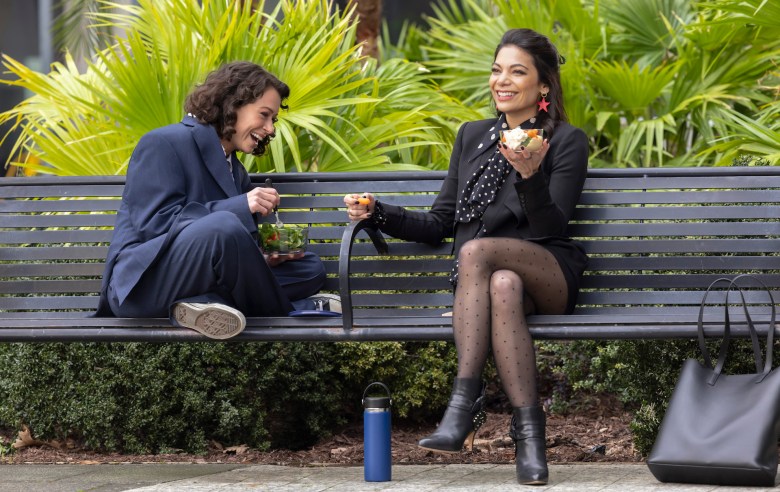 Tatiana Maslany and Ginger Gonzaga in “She-Hulk: Attorney At Law”

With a heavily female writers room, “She-Hulk” had the opportunity to address harassment, stalking, mugging, and more — but with its own flavor of comedy, and the authority of people who have experienced such things firsthand. There’s “real fear” on a “visceral level” for anyone who has been followed down a dark alley or attacked by someone stronger, and the “She-Hulk” team is mindful of that. The series also has a loophole unavailable to most shows and movies: Jen herself, breaking the fourth wall and talking to camera in every episode.

“It’s awareness,” Coiro stated simply. “We are aware — Jennifer Walters is aware that she is on a television show, that she has a platform, that people are watching her, with the breaking of the fourth wall, you get to be a little more self aware, and so you get to address these things head on in a way that’s pretty exciting.”

Coiro’s team shot more fourth wall breaks than what eventually made it into the show — head writer Jessica Gao was a particularly big fan of the technique — but ultimately didn’t want to lean on it too much. That time went instead to building Jen’s relationships, with cousin Bruce (Mark Ruffalo), colleagues Nikki (Ginger Gonzaga) and Pug (Josh Segarra), and her parents (Tess Malis Kincaid and Mark Linn-Baker).

“If you do it too much you disconnect her from the people in the story,” Coiro said of the fourth wall breaks. “We really needed to have [those bonds] be real and not be constantly interrupted by her relationship with us, the audience..”

With the initial wave of online trolling mostly in the rearview, Coiro is glad to see the “She-Hulk” conversation move on to its characters story arcs — even if how they fit into the wider Marvel Cinematic Universe is still under wraps.

“All of the gigantic universe fits into Kevin Feige’s brain — and I don’t mean K.E.V.I.N. the robot, I mean the real Kevin,” Coiro said, referencing the “She-Hulk” finale’s A.I. Marvel mastermind. “It’s a really collaborative environment, so everyone will throw out ideas, and then he’ll say ‘No, we can’t do that’ — and you don’t always know the reason, but you know that something big is coming on the horizon.”

“She-Hulk” is now streaming on Disney+.