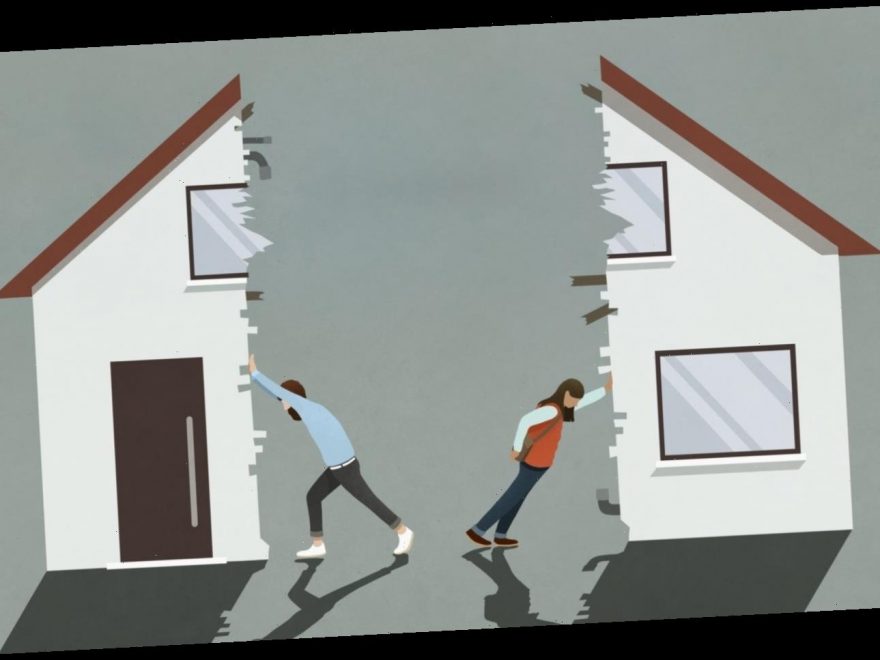 A debate about domestic partnership, and living with an ex, has gone viral on Twitter. Here in the UK, an estimated nine million Brits live with an ex after a breakup – but what is the reality of cohabiting with someone you need to move on from? Here, one writer shares her story.

Watching the man I thought I’d marry stood in his worn dressing gown, drinking lukewarm tea from the ‘grumpy old git’ mug I’d bought him for Christmas, it dawned on me that this wasn’t going to be easy: sharing a house with my now ex-partner.

No one expects to end up living with an ex, and yet, there I was, sharing a kitchen, bathroom and landing with someone I now had to learn to live without. Turns out it’s not so easy to have a clean break when you have to text your former partner to tell them to get more milk on their way home.

Sharing a place with an ex is, understandably, many people’s worst nightmare. Yet it’s estimated that nine million Brits have, with four months being the average time spent living with an ex-partner. Alongside organisational factors, financial restraints are often a reason exes live together – a study by Aviva found that 16% of separated couples remain living together due to the cost of moving.

My ex and I were already living in a house share when we signed a rental contract with mutual friends. Two months before we were due to move in to the new house, I broke up with him. It wasn’t an easy decision – I’d mulled over whether we could stay together for the year, at least for the sake of our friends. Eventually we separated, but as we’d already signed the contract for a year and the deposits were paid, we had no choice but to continue living together.

While living with friends often made it less intense, there were times when this arrangement became more challenging. It meant that he was always there for trips to the pub, Netflix binges, and those hungover I-need-to-tell-you-about-what-happened-last-night chats with friends over a much-needed strong coffee.

Louise Joy, a 29-year-old freelance marketing executive, found herself living with an on-off ex due to financial and logistical reasons: “I wasn’t in any position to move onto ‘someone else’ in that sense, but I couldn’t even get a grip on my feelings. How can you move on from someone when you see them every day?

“He was my best friend and, in any other situation, he would be the person I would turn to when upset. When they’re there, it’s hard to distance yourself.” Louise’s situation became more complex when the post-break up boundaries became blurred: “We’d go from broken up to still sleeping together but with no strings attached, to being just friends with occasional benefits… it was so hard to label things and it got so complicated.”

While my ex and I had to become platonic quickly, I was surprised at how easily we slipped back into old habits. It’s the familiarity and security of a person who knows – or knew – you at your best and, inevitably, your worst. One night I remember feeling physically ill, anxious and on the verge of a panic attack – a gut-punch of emotions. I just needed my ex by my side that night, a safe presence in a world of uncertainty. Nothing happened between us, but as I woke, I knew that clinging on to this easy coping mechanism whenever I felt fearful wasn’t healthy for anyone in that household.

It was a difficult period, but I was fortunate that the break-up was relatively amicable, as many women aren’t so lucky. Elizabeth*, a 34-year-old freelancer, has been sharing accommodation with her emotionally abusive ex for the past four months due to having nowhere else to go while living overseas: “It turned into this really horrible game-playing situation,” she says. “Obviously you’re still going to have some feelings for this person and so they play on that and try and make you jealous. It’s just grim.”

When I spoke to Elizabeth*, she was moving out of the place she shared with her ex that week, something which brought her relief, but even when you share a life together as exes, the tumultuous times can still make it difficult to say goodbye.

“Occasionally it’s nice company-wise, because sometimes we will have a really nice evening together, but then it’s that not knowing, being on eggshells all the time and that person playing with the fact that ‘you live in my house and I can kick you out whenever I want’. It’s rubbish.”

While my ex and I became good friends, it was never easy; learning not to use them as an emotional crutch, the bickering, the limitations if either of us wanted to move on to a new relationship (luckily neither of us jumped into anything serious during that year). Would I want to live with an ex again? Absolutely not, but I don’t regret it. After all, there was one very important thing it did teach me – to think really carefully before moving in with a partner again.

1.Take nothing for granted: Everything that you used to take for granted is now over and up for renegotiation. This means every logistic of your shared lives from cooking, cleaning, bill paying to when to have friends stay over.

2.Remember when they go low, you go high: You need to recognise the dynamics of how you behave towards your ex has changed unrecognisably. Set your intention that you stay calm and reasonable in all your dealings with your ex. If you feel triggered by their behaviour walk away.

3. Be sensitive: To navigate this uncharted territory minimise the time you spend in the kitchen or any communal areas. Apply a light-touch approach to your shared living space. This means behaving carefully and sensitively in what is an emotional loaded and potentially volatile situation.

4. Minimise small talk with your ex: Avoid referring to your shared past or your separate future. There are now very few neutral topics between you. Talk to friends or family about your feelings and recognise it is no longer appropriate or helpful to confide in your ex.

5. Stay in your room: Stay overnight with a friend when you can. Do what you need to do to protect your emotional well-being during this tricky transition. This too will pass but while you’re sharing living space with your ex think of yourself as a ninja. Stay sober. Prioritise your self-care and you’ll come through this difficult time with greater clarity, increased resilience and pride in how well you coped with an almost impossible situation.

This piece was originally published in December 2019