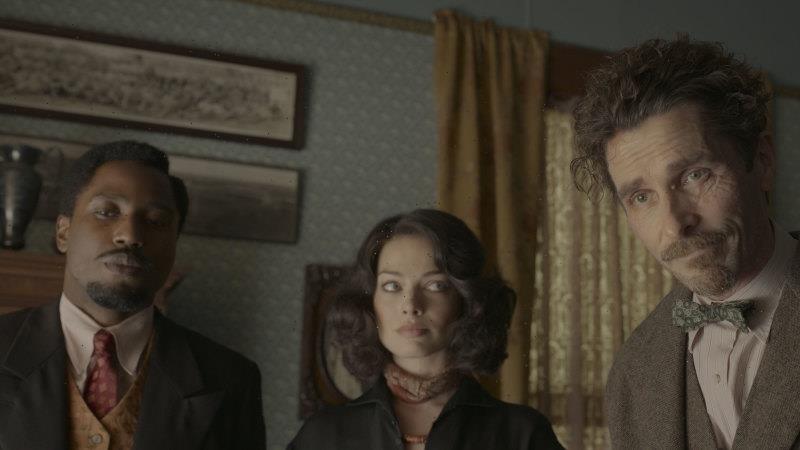 Six minutes later, I am sitting opposite Christian Bale and Robert De Niro, trying (and failing) to stifle a yawn over Zoom. The pair are in the middle of a press tour to promote their new movie, Amsterdam, a star-studded murder mystery set in the 1930s. The story involves three friends — a doctor, an attorney, and a nurse — played by Bale, John David Washington, and Margot Robbie. 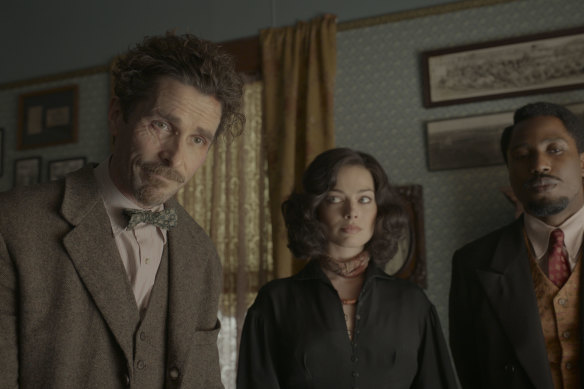 But the friendship turns dark when they’re falsely accused of killing a US senator and must try to clear their names. Along the way, they meet a former army general (De Niro), who helps them stumble across a dangerous conspiracy.

I know he is British, but he regularly plays such convincing Americans his voice is a little jarring this early in the morning. 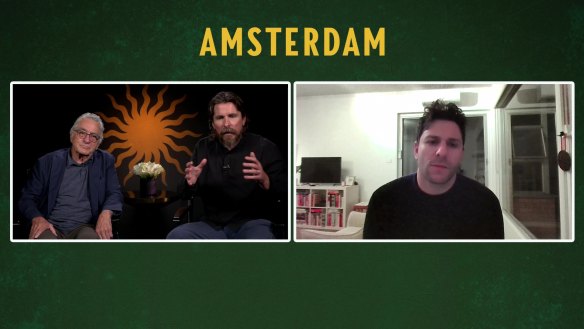 The very famous stars of Amsterdam, Robert De Niro and Christian Bale. And one semi-tired journalist.

After exchanging a few Sydney observations with Bale (such great beaches and the food!), I say hello to De Niro. At that exact moment, the Zoom connection pixelates, and my words come out jumbled.

It’s frustrating because the clock is running on my allotted 10 minutes with two of the most illustrious actors in Hollywood. Amsterdam is star-heavy, with Bale and De Niro leading an A-list cast that includes Chris Rock, Anya Taylor-Joy, Zoe Saldaña, Michael Shannon, Taylor Swift and Rami Malek.

The film is directed by David O. Russell, one of those rare directors who seems to generate more headlines than the actors he employs. Throughout his career, he’s been accused of punching George Clooney on the set of Three Kings, been captured on tape screaming at Lily Tomlin while filming I Heart Huckabees and allegedly bullied Amy Adams during American Hustle. 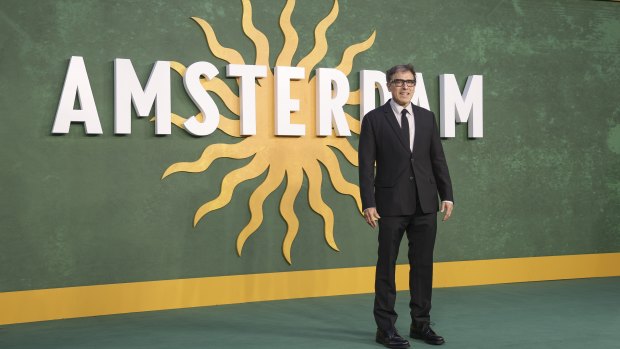 Director David O. Russell poses for photographers at the Amsterdam world premiere. Russell has a troubling history of on-set behaviour.

Despite the allegations, Russell remains a heavyweight in the industry, nominated for five Academy Awards, including three nods for best director. Amsterdam is Bale’s third film with Russell, having previously collaborated on the 2010 boxing biography The Fighter and the 2013 black-comedy crime film American Hustle.

“We’ve just grown closer and closer with each film, and every movie we do together, we’ll add another ten days to the filming schedule to fit in all the crazy ideas,” Bale says.

Amsterdam is a passion project for both Bale (who doubles as a producer) and Russell; the pair spent six years finessing the concept.

“Jotting ideas down on napkins, working and rewriting, I mean, David could write a novel from all the different characters that came and went,” says Bale.

“I have draft scripts all over my house, you open a drawer in the kitchen, and there’s another script.”

Amsterdam bills itself as a semi-true story drawn from a few of history’s lesser-known moments. De Niro’s general, Gil Dillenbeck, is based on a highly decorated soldier, Smedley Butler, who most people have never heard of, including De Niro himself. 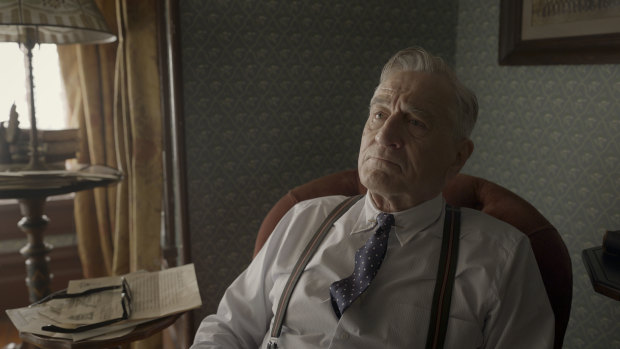 “I was never aware of Smedley until David told me about him, but he was important in speaking the truth after the First World War,” De Niro says.

One of the great character actors of our time, De Niro, made his name constructing personalities like Taxi Driver’s Travis Bickle from scratch. So, how does that compare to playing a real person?

“Working on a character from scratch is more interesting to me because you get a feel for them, and then push it wherever you like,” he says. 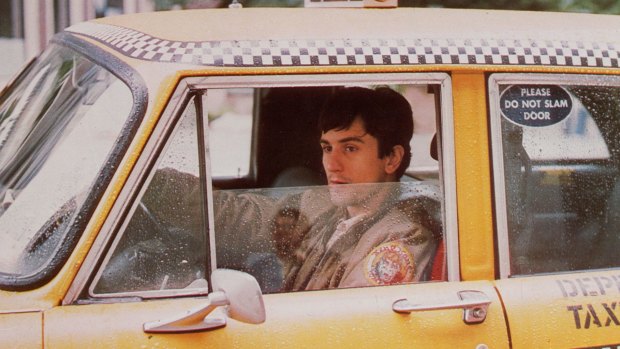 “But I enjoyed playing Dillenbeck because David gave me so much material on him; it was fascinating to learn about his life.”

At 79 years old, he may be in the twilight of his career, but the two-time Academy Award winner shows no signs of slowing down. De Niro will next appear in Martin Scorsese’s Killers of the Flower Moon (alongside Leonardo DiCaprio) and continues to keep an eye out for the next great script.

“There used to be this show in the 1950s in New York called Naked City, and the opening line to the show was: There are eight million stories in the naked city. This has been one of them,” says De Niro.

“Everybody has a story, and everyone’s story is interesting in one way or another; you just need to find the way in.”

For now, it’s time to find a way out, with the Amsterdam press team warning me that my ten minutes are nearly up. My last question is for Bale, who has worked with Russell Crowe, Chris Hemsworth and Margot Robbie in the previous year. Is he obsessed with Australians?

“That is correct, I didn’t realise so, but apparently, that is the case,” the 48-year-old laughs.

“I think everyone in the industry would tell you that your lot are the best people to have on set.”

Amsterdam is in cinemas from October 6.

Find out the next TV, streaming series and movies to add to your must-sees. Get The Watchlist delivered every Thursday.