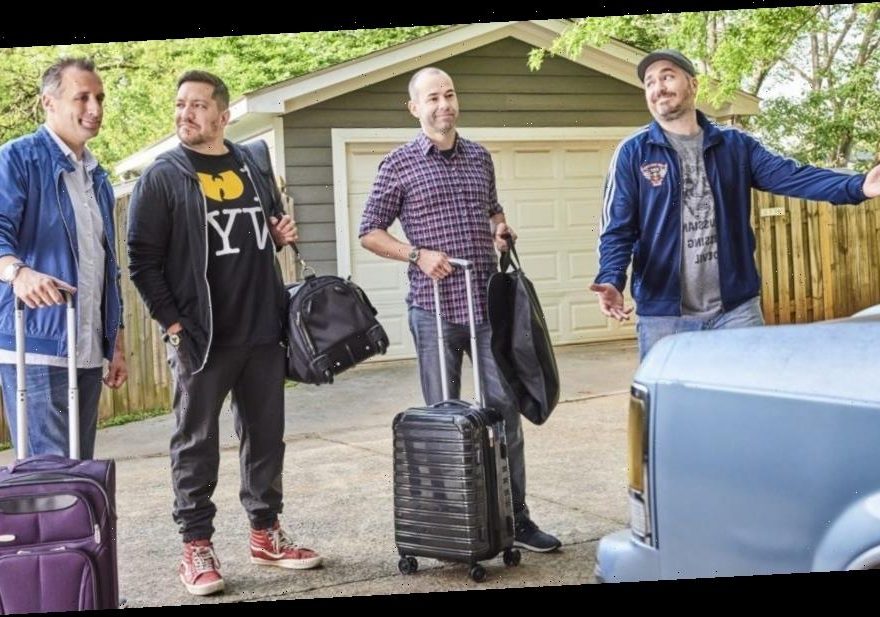 Impractical Jokers: The Movie isn’t pranking us when it comes to their box office performance. After having a stellar opening last week, the big-screen adaptation of WarnerMedia’s truTV prank show expanded from 357 to nearly 1,800 theaters and earned an estimated $3,545,000, to bring its cume to $6.6 million. The movie has now cracked the top 10 at the box office, right behind Birds of Prey and ahead of 1917.

The pic debuted to an impressive $2.6 million and had the highest per-screen average among major releases at $7,302. The audience response gave it enough of a boost to expand in its second week out, adding 1,493 theaters in 210 markets. On Friday, it slipped 6%, but then jumped a massive 51% on Saturday from last week.

As much as it seems that the performance of Impractical Jokers was out of nowhere, it really isn’t. The Jackass movie franchise is cut from the same cloth as the prank-driven Impractical Jokers, and proved to be wildly popular with audiences. It was a huge cash cow for Paramount, as the first film grossed over $64 million. It went on to release two sequels, with Jackass 3D earning over $117 million while 2013’s semi-scripted Jackass spinoff Bad Grandpa had a domestic run of $102 million.

With Impractical Jokers, the forthcoming Eric Andre pic Bad Trip  and a fourth installment of Jackass, audiences still have an affinity to laugh at hidden camera pranks, stunts, and public Schadenfreude. With its success, Impractical Jokers could very well be setting itself up for a money-making franchise.

Also opening this weekend was Wendy, Benh Zeitlin’s fresh, fantastical take on Peter Pan — which could have used a little more pixie dust to fly. The film from Searchlight Pictures had a soft debut in four theaters in Los Angeles and New York this weekend, grossing an estimated $30,000, with a per-screen average of $7,500.

The Sundance film is Zeitlin’s follow-up to the 2012 Oscar-nominated Beasts of the Southern Wild, and unfortunately, it pales in comparison with its opening. Searchlight opened Beasts in limited release and it earned $169,702 before grossing north of $21 million globally in its theatrical run. Hopefully, things will turn around for Wendy, as the film is set to expand to 10 new markets next week and will continue to roll out across the US and Canada in the beginning of March.

Andrew Heckler’s racially-charged Sundance pic Burden also struggled in its opening weekend, as it had exclusive runs at five theaters in New York and Los Angeles. The drama, starring Forest Whitaker and Garret Hedlund, earned an estimated $20,142 this weekend. Despite winning the Audience Award for drama at Sundance in 2018, it seems like the title hasn’t resonated or maintained traction with audiences since Sundance. Compared to 101 Studios’ inaugural pic The Current War, Burden’s opening is very low. The Nikolai Tesla pic starring Benedict Cumberbatch debuted north of $2.6 million in its limited release and went on to bank over $11 million globally.

Sony Pictures Classics released Michael Winterbottom’s Greed starring Steven Coogan on four screens this weekend. The satire based on controversial UK billionaire Philip Green earned an estimated $28,496 on four screens. Meanwhile, Oscilloscope’s Saint Frances opened exclusively at New York’s Angelika to the tune of $16,150. The comedy, which took home the Audience Award at SXSW in 2019, had multiple sold-out screenings and is currently sitting happy at 96% on Rotten Tomatoes. The film is set to expand to the ArcLight Hollywood this coming week and O-scope is planning a national roll out for March and April.

Autumn de Wilde’s Emma continues to charm audiences in its second week. The Focus Features pic expanded from five to 97 theaters in 33 markets this weekend, raking in an estimated $1,170,000 to bring its cume to $1,471,000. Focus is reporting strong openings in Phoenix, DC, Austin, and San Francisco, and word-of-mouth continues to hold strong for the fresh take on the Jane Austen classic starring Anya Taylor-Joy.

On the Parasite box office front, things are starting to simmer down in its post-Oscars glow — but that doesn’t mean its performance is poor. Now in its 21st week, Bong Joon-ho’s dark comedy is now down to 1,324 screens. This weekend it is expected to earn over $1.5 million, which is good news for its cume as it inches closer to $55 million. Parasite has now surpassed Mexico’s Instructions Not Included ($44.4M) to become the fourth-highest-grossing foreign language/international film at the domestic box office. If it keeps its momentum, it could very well pass Miramax’s Hero’s $53.7 million, as well as Life Is Beautiful’s box office gross of $57 million.

In addition to Parasite, Neon is heating up the specialty box office bank with Portrait of a Lady on Fire, as it expanded to 268 screens this weekend, earning $730,000, to make the Celine Sciamma-directed period romance cross the $2 million mark. The news comes after Sciamma and actress Adèle Haenel walked out on the César Film Awards in protest on Friday after Roman Polanski won for Best Director for J’accuse.

Topping of Neon’s weekend box office was the Severin Fiala and Veronika Franz horror The Lodge, which expanded to 395 screens and grossed an estimated $256,000 to make it surpass the $1 million in its cume.

Other noteworthy expansions include Amazon’s Seberg, which played in 373 theaters compared to its limited 3 last week. The Jean Seberg pic starring Kristen Stewart earned an estimated $207,534 in its second weekend. O-Scope’s CatVideoFest 2020 keeps purring as it reached 74 Screens to earn $157,000. Pantelion Films’ Las Pildoras De Mi Novio (My Boyfriend’s Meds) maintained its 350 theaters and earned $615,000 to bring its cume to $2,350,000.