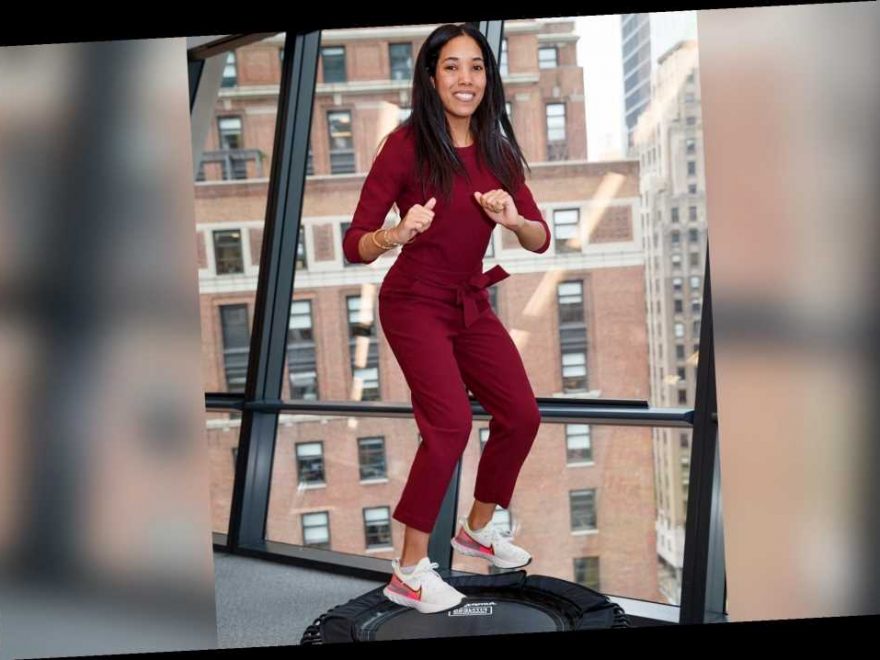 When Jordan Galloway commutes to Hearst Tower, instead of taking the nearest subway from her Prospect Heights home, the fitness director at Women’s Health magazine hops onto her bike for the 9-mile trek to Midtown.

“I can take an express train, which is about 30 minutes. The bike takes 45 and totally worth it for my mood and mental health,” she says. “I feel different when I get to work when I hop off my bike than when I get off the subway — if there are delays, it can really affect my mood.”

Galloway has been commuting by bicycle for five years. “I like to think of it as unconscious exercise, a moving meditation,” she says. “We all have really long days, and I was looking for ways to get moving into my daily life — you can’t always take a break for an hourlong class in the middle of the day.”

Galloway keeps activewear and comfortable footwear at her desk for when she can get to a Pilates class, for example. Sometimes, exercise creeps in as part of her job, like jumping on a mini trampoline for a story she worked on. Now, “I jump around for 10 minutes. I don’t think anyone knows that I do this! I want to get a permanent one for the office because it’s really great cardio.”

Liz Plosser, editor-in-chief at Women’s Health, says a group effort is beneficial to get the pulse pumping. “We all use Slack here. One that was set up by the editor-in-chief of Runner’s World is called the Tower Lunch Run,” she says. “Someone will say, ‘Hey, I’m doing the 4-mile loop in the park at noon, let’s meet at X for whoever’s in.’ It’s really inspiring when somebody says they’re going outside for a run, I can use some fresh air, some endorphins. It’s a great way to bond with people across the company. I’ve hatched all sorts of different collaborations just by running next to someone.”

Plosser says it’s important for leaders to encourage movement during the day. “I will high-five team members if I see them running over to the Hearst gym [a 9,000-square-foot on-site facility] to get a workout in. I know when they come back to their desk, they’ll be so much more awesome because they did that.”

They’re onto something. Movement during the day is key, especially during the dark, dreary hours of winter. Researchers at the University of Iowa revealed in a 2019 study that sedentary behavior is on the rise. Americans are sitting down more than ever — up to 6.4 hours each day — and with sitting at an all-time high, the risk heightens for diabetes, heart disease and obesity.

Karen Bussen, CEO of Farewelling in the Financial District, an online platform for end-of-life planning, counters the stationary trend by incorporating movement into her day. Often working from 7 a.m. until 11 p.m., she prefers to stand at work. “It keeps my back from aching,” says Bussen. “My legs feel noticeably stronger and I just feel less sluggish overall.”

Bussen also meets with a colleague for regular early-morning running workouts. “Sometimes we have an agenda, sometimes we just talk about updates,” she says. “It makes the run go by so much more quickly, and there are no e-mails or calls to disrupt the conversation.”

Another bonus? Endorphin boosters clear her head, which, in turn, leads to productivity. “I can edit a 700-word article twice as fast after a run or a brisk walk. In addition to feeling an energy boost, my thoughts are clearer.”

Bussen also consciously ramps up her steps. “I take the stairs in the subway at Grand Central instead of the escalator. Little things!”

Tweaks matter. Instead of thinking about a workout as a full-on sweat session, Carol Michaels, owner of Carol Michaels Fitness and creator of Recovery Fitness in West Orange, NJ, recommends leaning into simple ways to stay active. “Take stretching breaks every half hour,” she says. “The break can be two minutes to 10 minutes, depending on the person’s unique situation.”

Also, bring weights or resistance bands into the office. “Strength training exercises can be performed during conference calls or the short breaks,” says Michaels.

Find an exercise buddy who can serve as an accountability partner and join an exercise group. “Group classes are fun . . . one is motivated to exercise by the friendships developed in the class,” says Michaels. “In our impersonal world of social media, texts and e-mails, the social aspect of exercise cannot be overlooked. For some, it is the only part of their day where there is a human connection.”

And if you’re concerned about returning to your desk without showering and freshening up, Plosser says to “use wipes — you can freshen up that way. Dry shampoo is great.”

Exercise isn’t the only way to avoid morphing into a laptop couch potato. Paul T. Bartone, co-author of “Hardiness: Making Stress Work for You to Achieve Your Life Goals,” (Wiley) suggests a “breathing break” instead of a coffee break. “Spend a few minutes taking deep, slow breaths,” he says. “This simple technique stimulates your parasympathetic nervous system, which is needed to maintain balance and reduce the stress response.”

Getting away from your desk helps, too. Dr. Robert Rhee, chief of vascular surgery at Maimonides Medical Center in Borough Park, says even a few minutes count. “Get out of your chair and take a brisk walk for 10 minutes to get your blood circulating and your metabolism revved up.”

In fact, go a step further and schedule it on your calendar. Plosser suggests treating it like a medical appointment. “Would your boss tell you you’re not allowed to go to your dental checkup? ‘No, you can’t leave early for your child’s talent show?’ Your fitness and well-being are as much of a priority of your life.”