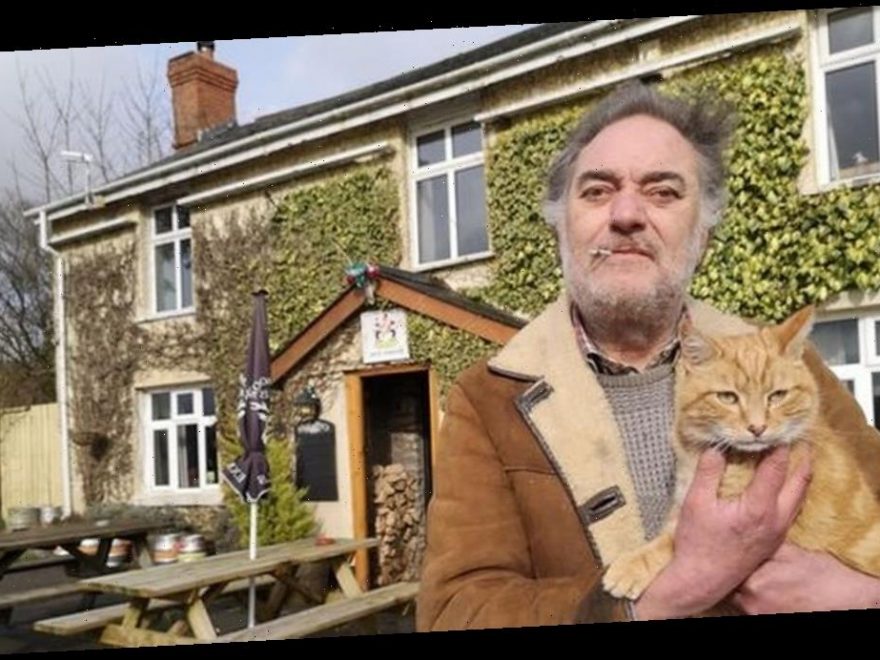 A pub on a Devon moor has found success getting punters to pour their own pints and to spend time with a curiously named moggy.

To the uninitiated eye, the ivy-clad Poltimore Arms in Yarde Down on Exmoor doesn't look too unusual from the outside.

But venture inside and you're in for a treat, Devon Live reported.

The 17th century pub is billed by its landlord Steve Cotten as the maddest in England and boast a few famous punters amongst its clientel.

Prince Harry and Damien Hirst are said to be amongst its enthusiastic fans.

"I took on the pub seven years ago, and the only reason I did was to save it from extinction," said Steve.

"Every last person on the planet – my family, solicitors, surveyors – all said 'don't do it'.  So that's a good reason to do anything and it made me even more determined.

"Nobody touches pubs, there's a reason they are closing at a rate of three a day or whatever. Pubs have almost had their day unless they get reinvented or go backwards, like I've done here.

"This place has something special about it – there's no light pollution, no noise pollution, the history goes back to 1286 – it's pretty phenomenal."

Enter into the pub and you will be interrogated by Steve while a stuffed dead ferret hangs overhead.

Unlike most modern pubs, the Poltimore Arms only offers one gin, one whiskey, a few spirits and a few beers.

Steve said: "There's a lovely Egyptian lady who comes and cooks one plate of food a week, usually chicken and rice.  People order through a WhatsApp group.

"There's no standing on ceremony – you get a bowl and a fork and everyone sits down together and has a chat.

"Everyone also knows that you can bring your own food up here too."

While music forms a big part of the pub – there are at least three pianos and a guitar which anyone can play – Steve has made a point of banning fruit machines, TVs and WiFi.

He said: "I go to the pub to get away from those things, and so do other people – they come here for a conversation.  You can discuss any topic under the sun here, nothing is taboo.

"There's only one rule – when you come in the pub, everyone is the same – I don't care who you are.

"Prince Harry used to come here before he got married when he went shooting.  Damien Hirst and his ex-wife Maia were regulars at one point, and we have everyone from farmers to Formula 1 stars and billionaires.

"But when they walk in that door they will all be treated the same – with disrespect and disdain.

"And they love it, they love the fact I will ridicule them and talk to them like a piece of crap because no one else does."

It has been important that the pub builds up a name for itself because of its location.

The nearest town is three-and-a-half miles away and there is a distinct lack of nearby houses or passing trade.

Another of the pub's distinct characteristics is how green it is.

He said: "There's no mains electricity, water or gas.  I don't use any electricity for at least 18 hours a day.

"We use a generator and a few car batteries for the electricity we do use, but I'm having solar panels fitted soon and once they're up we can turn the generator off.

"Pretty much every other landlord in the country has a car too.  But because I'm not allowed to drive due to my eyesight, I bought a horse to get around."

As popular as Steve is with punters, there is another figure who represents the pub.

"I went to the centre and said 'give me the nastiest, most horrible cat that nobody wants' and they said 'that's Fred'.

"He was insane, he would rip me to shreds every night and attack anything that moved, absolutely beserk.

"Touch wood he's fine now.  He's even got  his own Facebook page.

"I do run all my business plans by him, people always think I'm joking but I'm not.  I talk to him and if I have a stupid idea he'll say 'no, think again'."

Out the back of the pub there is a bottle shop run by Natasha Vukic which sells craft ales, ciders, gins, rums and other unique refreshments.

Despite certain limitations, particularly how dark and cold it can be, the Poltimore keeps many fans.

Steve added: "The amount of tourists that come in here and say 'wow, isn't this fantastic' – even when we're looking at each other thinking it's dark and cold.  It is that way, but people like it.

"When tourists come in I will instantly interrogate them and within 30 seconds I'll have introduced them to everybody.

"I made a Chinese visitor work behind the bar for the night and she recently sent me a postcard from Beijing saying it was the best day of her entire tour of Europe, which is fantastic."