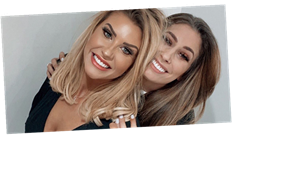 Anyone that follows either of them on Instagram will know that Loose Women star Stacey Solomon and social media cleaning sensation Mrs Hinch are the best of friends.

The Essex-based duo share a love for meticulous organisation and interior design. They also both have baby sons, Rex Solomon and Ronnie Hinchliffe, born just months apart. From their well-documented playdates and mother/son hangouts we are sure they too will grow up to close pals.

However, as many of us know, having a young child can be exhausting, especially when combined with juggling a career. But the best cure is sometimes a night out, the opportunity to let your hair down with your best friend.

And that is exactly what Mrs Hinch and Stacey did on Sunday night, heading to watch Joe Swash, Stacey's other half, compete on Dancing On Ice. Here is what our favourite ladies got up to…

As with all the best nights out, the fun began before even reaching the venue. The girls spent the taxi ride singing along to tunes as they giggled away. Stacey commented on the video she uploaded, writing: "On our way out out".

They then uploaded a hilarious video of themselves singing away but this time both using the same filter that Mrs Hinch favours in her Instagram Stories. The 'Cleanfluencer' uses the feature that alters her appearance to look like an old woman and has named her Greta. She has previously explained that she chose the disguise to combat trolling, saying: "People don't pull apart Gretel's appearance. Her voice, or anything at all! So she's like my security blanket!

"To post a picture of myself sends my chest into overdrive! Gretel helps me be who I am inside without worrying about people pulling me apart every day. Which sadly trolls do and I'm not strong enough for that just yet." In this video Stacey's alter ego is obviously called Gertrude.

The singing and dancing didn't stop once they go out of the cab though, as they filmed the two mums settled into their seats by the Hertfordshire ice rink. Stacey uploaded another video to her Instagram stories of her and her BFF dancing around and singing along to Abba's Dancing Queen from up in the stands.

The women wore matching black tops to the event and both had perfectly manicured nails. This stunning image was uploaded to Stacey's Instagram and she captioned the photo: “When they try to pit you against each other but there’s no gaps here for your cruel wedges.

This comes after Stacey has also been uploading images of her tidying to her Instagram in her trademark “tap to tidy” style. But the two women have a shared passion, and as they have proven, are not in competition.